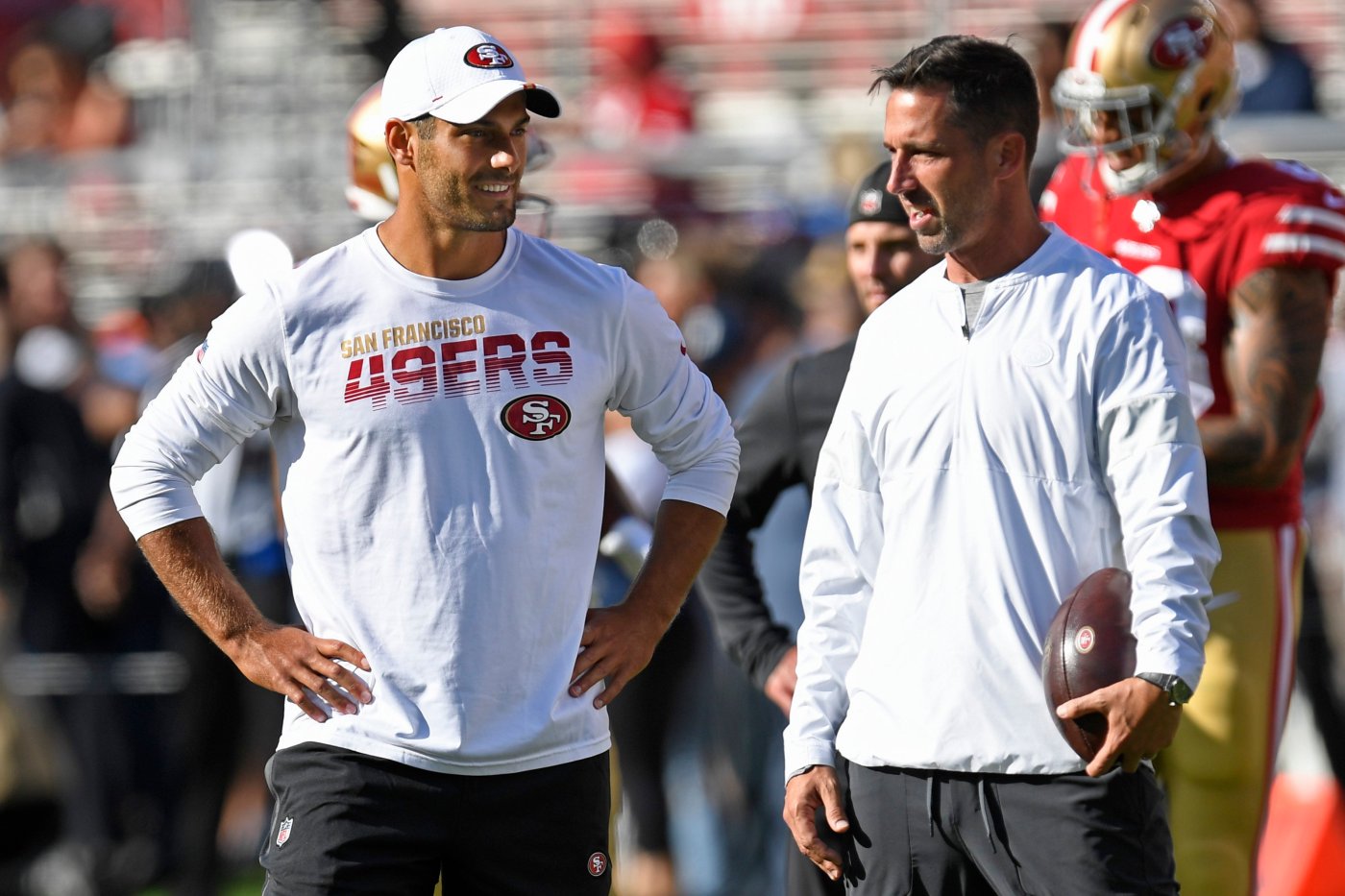 The 49ers’ quarterback job is not an open competition. Not yet, anyhow.

“Yeah, I mean Jimmy definitely is our starter right now, and right now there isn’t a competition, because I don’t believe Trey would be in a position to compete,” Shanahan said Monday on The Rich Eisen Show.

“Jimmy is too good of a player, has too good a grasp of our offense. He’ll start out OTAs running, like he’s done before, and he’ll be the starting quarterback.”

Shanahan deemed Garoppolo healthy and a constant presence in the virtual meetings over the past two weeks. Last year, Garoppolo missed 10 starts because of high-ankle issues, adding to a concerning medical record that included a 2018 knee injury.

Shanahan debunked any reports of Garoppolo requesting a trade in light of the 49ers’ pursuit of a rookie quarterback.

“Jimmy’s a competitive dude,” Shanahan said. “Like a lot of players would have done, he could have called and said, ‘I get it. I want you guys to trade me or move me or whatever.’ Jimmy hasn’t done that at all.

“He wants to come in. He wants to compete. He’s been on Zooms every day (in offseason virtual meetings). I’ve talked to him a bunch. I’m excited to get both of them in here together in two weeks.”

Rather than risk another season on Garoppolo’s health, the 49ers traded up for Lance, who won a FCS national championship for North Dakota State in January 2020 but was limited to one game last fall as the Bison opted out of the season.

When did @49ers head coach Kyle Shanahan know it was going to be @treylance09 they selected with the 3rd overall pick? Were they grinding tape right up until go-time?#NFL #NFLDraft #49ers pic.twitter.com/Ykr5pMKTny

“When he’s ready to compete – that doesn’t mean he tells me, that doesn’t mean I’ll tell him – we’ll all see it. It’ll start with me but go to the coaches, go to the players, and guys know when a guy is ready to compete with the starter. You get that vibe. As soon as it’s like that, I will let them compete. But I’m not really setting a date on it because I know how hard that will be.”

On-field drills can begin May 17. The 49ers’ players had stated through the NFL Players Association that “many” planned to skip the voluntary program because of COVID-19 concerns.

Garoppolo has not been available to the media since Jan. 4, a day after last season.

Shanahan, also in his lengthy interview with Eisen, clarified that he called Green Bay Packers coach Matt LaFleur prior to Thrusday’s draft and quickly was told Aaron Rodgers was not available in a trade.