SF Giants mailbag: Do the Giants need another set-up man? Would they trade a starting pitcher? 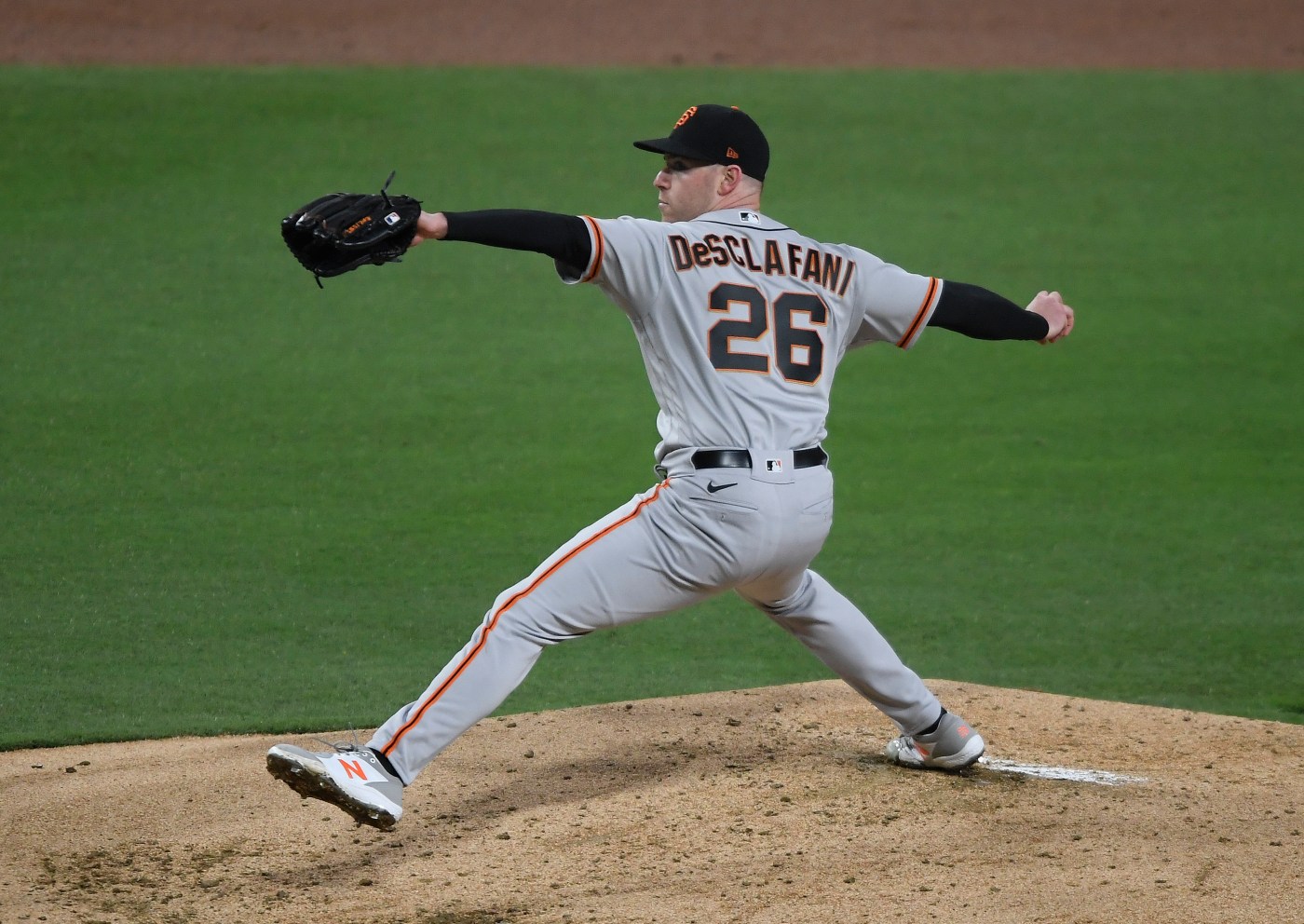 With the first week of games in the books, the Giants are returning to Oracle Park on Friday to play in front of fans at their home ballpark for the first time since September, 2019.

After finishing their first road trip with a 3-3 performance, Gabe Kapler’s club will host the Rockies and Reds in a pair of three-game series before hitting the road and flying across the country to play an NL East team, the Marlins, for the first time in more than 18 months.

With six games down and 156 to go, our Giants beat reporter, Kerry Crowley, fielded your questions for the first mailbag of the season. To submit a question to be used in next week’s mailbag, email Kerry at [email protected] or send him a message on Twitter @KO_Crowley.

Question from @darthurzoo: If the walks continue with the current bullpen will the Giants brass be willing to give the early hook and DFA for other guys who almost made the club? Or will they be patient since most have big league experience?

Crowley: Based on what we’ve seen in the past from Giants president of baseball operations Farhan Zaidi, he’ll typically wait about four-to-six weeks before designating a veteran player for assignment. The Giants waited until May in 2019 to cut Gerardo Parra and Yangervis Solarte and about a month into the season before letting Hunter Pence go in 2020. I think it’s a little different with relief pitchers because they’re more easily replaceable, but the Giants still guaranteed more than $1 million to José Álvarez and Matt Wisler and would likely prefer to give them a longer look they do have extensive big league track records.

If the Giants do make early roster moves, expect Nick Tropeano, Dominic Leone and Zack Littell to be the first non-roster pitchers to be in consideration for bullpen spots.

Question from @burritoman: What will be Alex Wood’s role if the current five starters continue their success?

Crowley: Wood will likely need one-to-two more outings at the Giants’ alternate site before he’s ready to return, so I think we’re still looking at a 10-to-15 day timeframe before the club needs to make a roster move.

These types of things have a way of working themselves out, but let’s say the hypothetical scenario of each starter staying healthy and successful unfolds like you mentioned. In this case, I think the Giants would bring Wood back to the active roster and have him piggyback on days when either Logan Webb or Aaron Sanchez are slated to start. They could have Webb or Sanchez go four-to-five innings and then have Wood pitch four-to-five innings, which would save the bullpen one day per week and limit the number of times each of those pitchers is facing batters a third time through the lineup.

Question from @mistermcpet: What’s the story with LaStella and how will he be incorporated into the lineup if and when he’s totally healthy again? With Longoria and Solano hitting, would they be benched for every RH starter for LaStella? Seems unlikely.

Crowley: It hasn’t been the smoothest start to the season for La Stella, who was plunked in the knee in one of the Giants’ final exhibition games and was scratched from Tuesday’s lineup in San Diego with back tightness. But keep this in mind: The Giants signed him to a three-year deal and believe he’ll be a big part of their infield moving forward.

Most members of the infield will play four-to-five days a week this season and while Kapler will play the hot hand when he can, he’s also going to be looking to get days off for Longoria, Solano, Belt and others to keep an older roster fresh. Expect La Stella to play a lot of second base and occasionally fill in at third base when the Giants face a right-hander, but given how well Longoria and Solano are hitting, there’s no rush to get him in the lineup if he isn’t fully healthy.

Question from @michaelergas: If everything goes perfectly with Marco Luciano, is there a scenario where we don’t pay big money on a SS next offseason and instead go with a bridge FA shortstop?

Crowley: It’s impossible to look this far into the future and accurately guess how a fantastic year from Luciano in the minors would impact the Giants’ offseason plans, but regardless of how he performs, I can’t imagine a scenario next offseason in which the franchise isn’t one of the top spenders in the majors.

If Luciano is as good as he’s expected to be at shortstop, I still think the Giants should pursue either Corey Seager or Trevor Story when they hit free agency this offseason. Assuming Javy Báez and Carlos Correa become free agents, the Giants should also be in the mix for those players.

Question from @talk2nordy: Despite the myriad of relief pitchers that were signed this offseason, is it possible that the Giants are still in need of a dependable set-up man? Is Reyes Moronta “behind” schedule in terms of assuming that role?

It’s still early in the season, but I’d say having one or two more dependable set-up men would do wonders for the Giants bullpen, particularly because de-facto closer Jake McGee has looked so consistent since the start of spring training. It’s possible the dependable set-up men are already on the staff (Caleb Baragar and Wandy Peralta come to mind as options), but the Giants may have to wait another few weeks before determining if they can really trust Tyler Rogers in the eighth inning.

Matt Wisler, who signed a one-year deal in the offseason, doesn’t seem like a solution in the eighth inning, but again, teams don’t give up on pitchers after just four games.

As for Moronta, it’s hard to say he’s “behind” schedule because he’s returning from a major shoulder surgery, but I think the Giants would prefer to see his velocity tick up before inserting him into an eighth inning role. Moronta has never had plus-command, so it’s a bit risky to expose his current 94-mile per hour fastball to high-leverage spots.

Question from @tracie_cone: Does Mauricio Dubon have the arm of a center fielder? I see he has the speed.

Crowley: Dubón ranked in the 95th percentile in outfield jump last season and 97th percentile in Outs Above Average, which are two good metrics for measuring how quickly an outfielder gets to a flyball and how accurately they can read a ball off the bat.

He’s athletic enough to be the Giants’ best option in center field, but I think the question about his arm strength is a good one. What’s interesting to me is that I’ve never seen Dubón have serious issues with velocity and carry while throwing across the diamond from the shortstop position, but I also haven’t seen much accuracy from him in the outfield.

I think the consistency and accuracy of his throws from center field will improve with more opportunities, but I honestly haven’t seen enough reps yet to say whether he has arm strength that will eventually be considered “plus,” at the position.

Question from @HofPosey: Can we expect to see a Heliot Ramos call up this year? And if we do, what’s a possible date he gets called up?

Crowley: After watching Ramos torch Cactus League pitching, I’m convinced we’ll see him in San Francisco this year. The Giants want him to get 250-to-300 at-bats in the upper levels of the minors before bringing him up to the majors and their hope is that when he arrives, he’ll never need to go back to Triple-A.

I’ve been calling August 15 as Ramos’ projected debut, so give or take a week from of that date.

Question from @TroyMofakham: if veteran additions such as Sanchez, Wood and DeSclafani perform well, do you expect them to be traded at the deadline for prospects?

Crowley: This is totally dependent on the Giants’ record and the team’s chances of securing a playoff berth.

After four consecutive losing seasons, I’m confident Zaidi wouldn’t give up on the season and sell at the deadline if the Giants had a realistic path to the postseason. I also know he’s building for the future so if the outlook isn’t good and his starting pitchers have some value, Zaidi will be motivated to make moves.

An idea to consider: If a prospect such as Sean Hjelle or Tristan Beck is clearly ready for a major league opportunity and the Giants want to add a bat at the deadline, they could trade a veteran starter, promote a young prospect and execute a need-for-need transaction.

Question from @SFGiantsLady: What Giants player is the best cook?

Crowley: All the players say it’s Evan Longoria. I can’t vouch for any of their cooking, though.