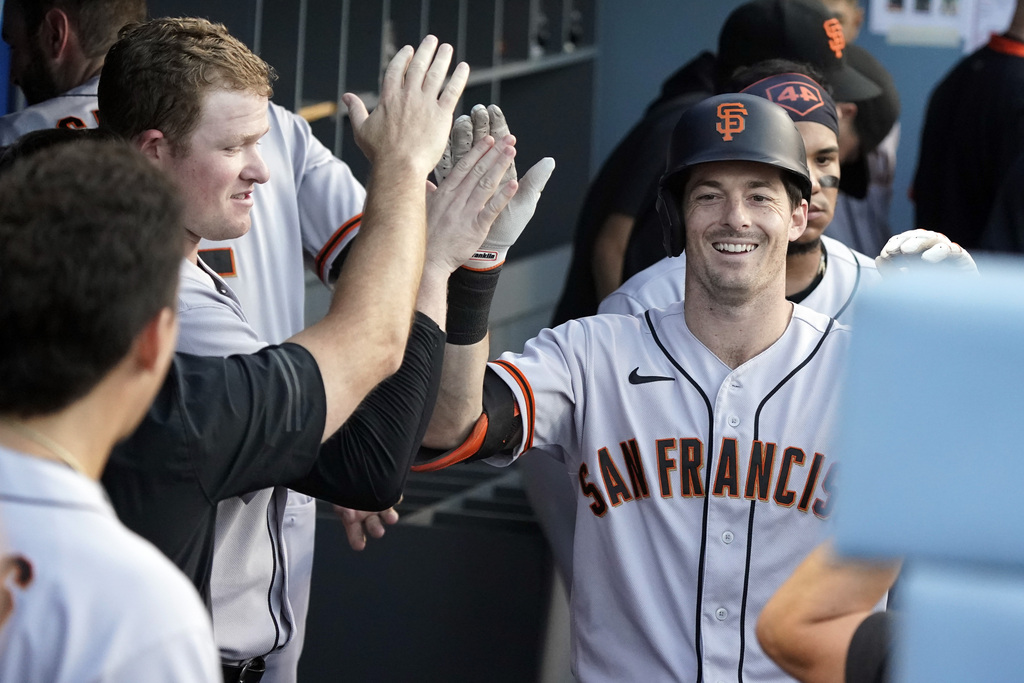 LOS ANGELES — For the last 52 days, a Giants team that enjoyed an unlikely first half run of excellence has sat alone in first place in the National League West.

Thanks to Buster Posey, Wilmer Flores and closer Tyler Rogers, they’ve made it 53 in stunning fashion.

A night after the Giants coughed up a 6-1 fifth inning lead and lost 8-6 on a walk-off three-run home run from Dodgers catcher Will Smith, it was San Francisco’s turn to break hearts as Flores launched a go-ahead two-run home run off closer Kenley Jansen to power the Giants to a come-from-behind 4-2 win.

With the Giants trailing 2-1 entering the ninth, Posey came off the bench for his fourth pinch-hit appearance of the season. The catcher drilled a Jansen cutter into right field to start a Giants rally before Steven Duggar replaced him as a pinch-runner.

Duggar didn’t have to do more than jog.

On the third pitch of Flores’ at-bat, he crushed a 406-foot homer into the left field bleachers to stun a Dodgers crowd that was sent into a frenzy only 24 hours earlier when Smith crushed a Rogers slider deep into the night.

With Rogers warming in the bullpen, a Giants’ offense that has struggled to manufacture runs of late rallied for one more as a Darin Ruf double followed by walks from Donovan Solano and Thairo Estrada convinced Dodgers manager Dave Roberts to pull Jansen.

Immediately after Rogers surrendered the walk-off home run on Tuesday, Giants manager Gabe Kapler affirmed his confidence in the right-hander and said he “couldn’t wait,” for the next opportunity to send him back to the mound.

Rogers got one heck of a chance at redemption.

The blown save marked Jansen’s first against the Giants since September 12, 2013, when Gregor Blanco recorded a game-tying hit in the ninth inning before the Dodgers won 3-2 in 10 innings.

The victory allowed the Giants to extend their near two-month reign atop the division and guaranteed they would at least split a pivotal four-game set in Los Angeles. Regardless of what takes place in Thursday’s finale, the Giants will head home for the weekend in sole possession of first place to face a Pirates team that was just swept in four games by the Arizona Diamondbacks.

Unlike veteran starter Aaron Sanchez who is scheduled to make his seventh rehab start Thursday with Triple-A Sacramento since being sidelined with a shoulder injury and subsequent blister issue, Webb wasn’t given the luxury of building up his stamina in the minors.

When the youngest member of the Giants’ roster was ready to start pitching again after a five-week absence due to a shoulder injury, San Francisco thrust him back into the rotation for a three-inning start against the Nationals on Friday, July 9.

Webb still isn’t ready to throw 100 or more pitches in a start, but he’s been effective and efficient since returning from the injured list. Wednesday’s 75-pitch outing at Dodger Stadium went almost as well as the Giants could have hoped as he completed five innings while limiting a deep Los Angeles lineup to two runs.

Webb’s outing started poorly as he gave up a leadoff solo home run to shortstop Chris Taylor, who tormented the Giants with two home runs in Tuesday’s 8-6 loss, but he rebounded by only allowing two hits over the remainder of his start.

Harvick and Elliott feud as Larson wins in Bristol