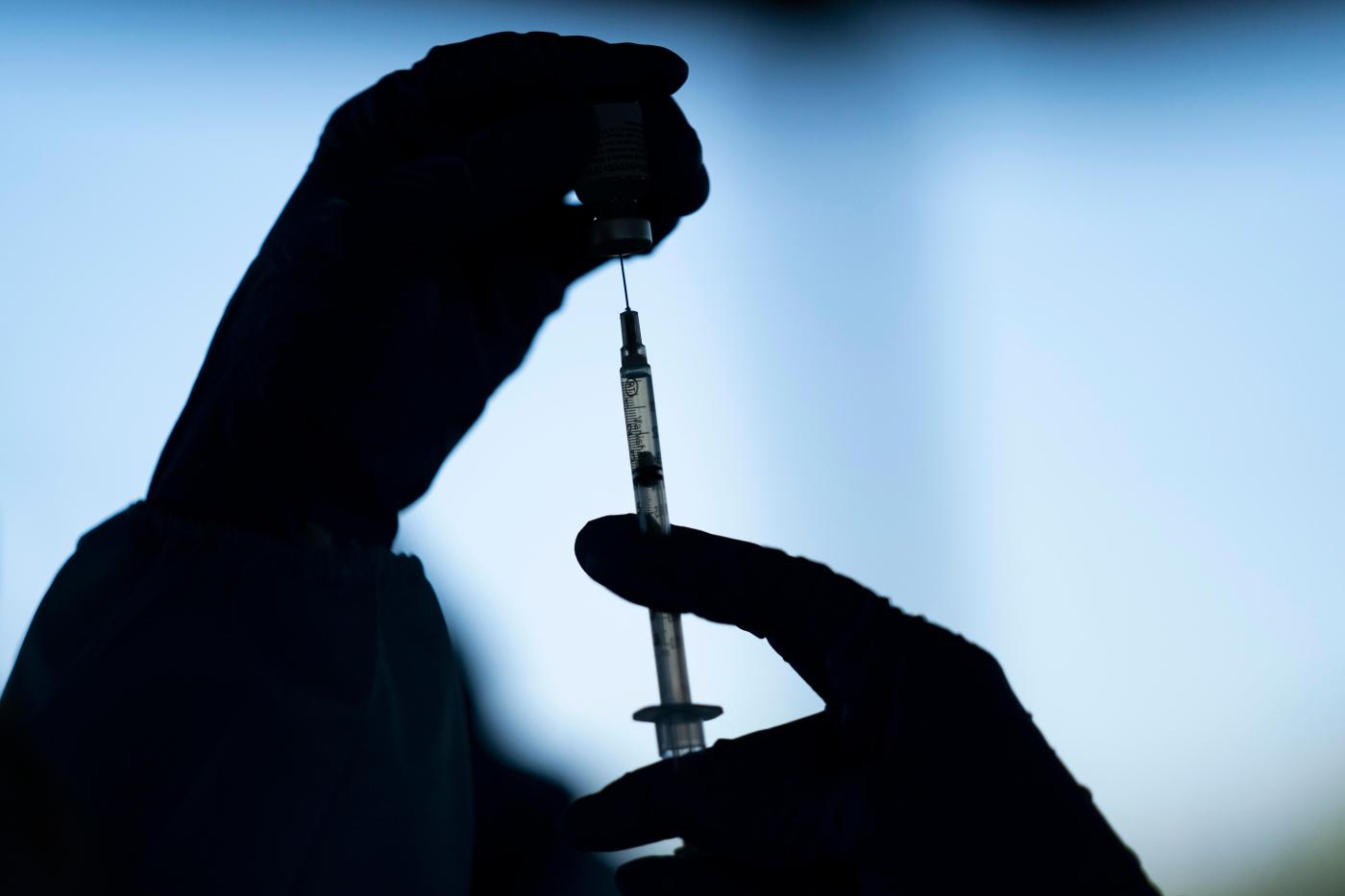 By The Associated Press

CHICAGO — Restaurants and certain bars across Chicago and suburban Cook County have opened their doors to customers for the first time since late October after winning approval Saturday from Illinois health officials.

With the city and county moving up to Tier I of the state’s coronavirus mitigation plan, restaurants and bars that serve food can seat customers indoors at 25% capacity or 25 people per room, whichever is less.

HERE’S WHAT ELSE IS HAPPENING:

WASHINGTON — President Joe Biden pledged in his inaugural address to level with the American people, and the message from his first three days in office has been nothing if not grim and grimmer.

He has painted a bleak picture of the country’s immediate future dealing with the coronavirus, warning Americans that it will take months, not weeks, to reorient a nation facing a historic convergence of crises.

The dire language is meant as a call to action, but it is also a deliberate effort to temper expectations. The U.S. is trying to roll out its vaccination program, with issues of slow production and distribution.

The U.S. leads the world with 24.8 million confirmed coronavirus cases and more than 415,000 deaths.

MILAN — Italian premier Giuseppe Conte is pledging legal action not only against Pfizer but any pharmaceutical company that doesn’t meet its coronavirus vaccine commitments.

Conte says delays announced by a second company, AstraZeneca, were “worrying” and if confirmed would mean that Italy would receive an initial delivery of 3.4 million doses instead of the agreed 8 million.

Conte says the “the slowdown in deliveries constitute serious contractual violations that produce enormous damages to Italy and other European countries, with direct repercussions on the lives and health of citizens and on our socio-economic fabric, already badly tested by a year of the pandemic.”

He pledged Italy would take every legal recourse “as we are already doing with Pfizer-Biontech.”

Italy is under tiered restrictions and intensive care wards have surpassed the threshold for alarm in five regions.

On Saturday, 13,000 new cases and 488 deaths were recorded by the Health Ministry. Italy’s death toll of 85,000 is the second highest in Europe and sixth highest in the world.

MADRID — Spain’s top military commander has been forced to resign after he and other high-ranking officers violated established protocols and received the COVID-19 vaccine ahead of time.

Spain’s defense ministry confirmed to The Associated Press on Saturday that Minister Margarita Robles had accepted the resignation of Chief of Staff Gen. Miguel Ángel Villarroya.

His resignation comes after online news site El Confidencial Digital reported that Villarroya and other top brass had broken national protocols for Spain’s vaccination strategy, which currently only allows nursing home residents and medical workers to receive shots. Several public officials have jumped the vaccine queue in recent weeks, including a regional health chief for southeast Murcia, who also resigned.

A top vaccine official with the state Department of Health and Social Services made the announcement.

Teachers 50 years or older, residents that have two or more high-risk health conditions and other essential workers will be prioritized next.

State officials say conversations about vaccinating teachers are happening both in Republican Gov. Mike Dunleavy’s office and among a scientific and medical advisory committee that helped develop the state’s vaccine policy.

MECCA, Calif. — Advocacy groups are heading into farm fields in California to bring vaccines and information to migrant laborers in Spanish and other languages.

Some immigrants in the country illegally may fear that information taken during vaccinations could be turned over to authorities and not seek out vaccines. Those who speak little or no English may find it difficult to access shots.

These challenges are particularly worrying for Latino immigrants, who make a large portion of the workforce in industries where they have a significant risk of exposure.

In California’s sprawling Riverside County, home to a $1.3 billion agriculture industry, a health care nonprofit went to a grape farm to register workers for vaccine appointments. The Desert Healthcare District and Foundation also shares information about the virus and how to get tested on WhatsApp in Spanish.

PRESCOTT VALLEY, Ariz. — A multipurpose arena in Prescott Valley will be the latest large venue in Arizona to become a COVID-19 vaccination site.

Cottonwood-based Spectrum Healthcare on Monday will open an appointment-only site called “Vaccination Station” inside Findlay Toyota Center, a 5,100-seat facility that has hosted events including basketball games, rodeos, concerts and ice shows. The Daily Courier reports that Spectrum plans to administer shots to as many as 1,000 people daily.

Pima County already opened a drive-through vaccination site in Tucson at Kino Sports Complex. The state plans to open a site at the Phoenix Municipal Stadium on Feb. 1.

Arizona has the worst infection rate in the country with 1 in every 141 residents diagnosed with the coronavirus in the past week.

The Department of Health Services on Friday reported 8,099 new cases and 229 more deaths. That increased the state’s confirmed pandemic totals to 708,041 cases and 12,001 deaths.

MEXICO CITY — Mexico President Andrés Manuel López Obrador has given state governors permission to acquire coronavirus vaccines on their own.

So state governors have been calling for permission to obtain vaccines on their own, and the president said Friday they can do so as long as they inform federal officials and use only approved vaccines.

Also, López Obrador announced Mexico plans to start vaccinating teachers and other school personnel in one of the country’s 32 states this weekend with an eye toward resuming in-person classes there in late February.

Officials reported more than 21,000 confirmed infections Friday, a day after the country listed a record 22,339 cases. Deaths related to the virus in the previous 24 hours reached 1,440.

LISBON, Portugal — Portugal’s medical agency says it has identified the first case in the country of the new coronavirus variant believed to have originated in South Africa.

The agency says the new variant was found in a South African resident of Lisbon. Medical authorities have already suggested a massive surge in infections is from the spread of a variant identified in southeast England.

Portugal’s hospital COVID-19 wards and ICUs are on average around 90% full. Daily deaths reached a new record for a fifth day in a row at 234 on Friday, bringing the total to 9,920 in a country of 10.3 million.

The country also faces the challenge of holding a general election on Sunday.

LONDON — A leading politician in Wales has resigned from a senior post after he and colleagues had a drinking session inside the Welsh parliament buildings while pubs and bars are closed during a coronavirus lockdown.

Paul Davies says he was stepping down as leader of the Welsh Conservatives “for the sake of my party, my health and my own conscience.”

Another Welsh Conservative lawmaker, Darren Millar, was quitting as the party’s chief whip.

PARIS — French doctors have new advice to slow the spread of the virus: Stop talking on public transport.

The French Academy of Doctors issued guidance saying people should “avoid talking or making phone calls” in subways, buses or anywhere in public where social distancing isn’t possible. Masks have been required since May, but travelers often loosen or remove them to talk on the phone.

Infections in France are gradually rising this month, at more than 20,000 per day. France currently has the longest virus curfew in Europe, from 6 p.m. to 6 a.m., and restaurants and tourist sites have been closed since October.

The government has so far sought to avoid a full new lockdown. Protests are expected around France on Saturday against virus-related layoffs and to support those arrested for holding a techno rave party despite virus restrictions.

LONDON — Britain’s main doctors’ organization says it is concerned about the U.K.’s decision to give people a second dose of coronavirus vaccine up to 12 weeks after the first, rather than the shorter gap recommended by manufacturers and the World Health Organization.

The U.K., which has Europe’s deadliest coronavirus outbreak, adopted the policy in order to give as many people a first dose of the vaccine as quickly as possible. So far almost 5.5 million people have received a first dose of either a vaccine made by Pfizer or one developed by AstraZeneca.

AstraZeneca has said it believes a dose of its vaccine offers protection after 12 weeks, but Pfizer says it has not tested the efficacy of its jab after such a long gap.

The British Medical Association urged England’s chief medical officer to “urgently review” the policy for the Pfizer vaccine. It says there was “growing concern from the medical profession regarding the delay of the second dose of the Pfizer vaccine as the U.K.’s strategy has become increasingly isolated from many other countries.”

HONG KONG — Thousands of Hong Kong residents were locked down in their homes Saturday in an unprecedented move to contain a worsening coronavirus outbreak in the city.

Authorities said 16 buildings in the city’s Yau Tsim Mong district would be locked down until all residents were tested. Residents would not be allowed to leave their homes until they received test results.

“Persons subject to compulsory testing are required to stay in their premises until all such persons identified in the area have undergone testing and the test results are mostly ascertained,” the government statement said.

The restrictions, which were announced at 4 a.m. in Hong Kong, were expected to end within 48 hours, the government said.

Hong Kong has been grappling to contain a fresh wave of the coronavirus since November. Over 4,300 cases have been recorded in the last two months, making up nearly 40% of the city’s total.

WUHAN, CHINA — A year ago, a notice sent to smartphones in Wuhan at 2 a.m. announced the world’s first coronavirus lockdown, bringing the bustling central Chinese industrial and transport center to a virtual standstill almost overnight. It would last 76 days.

Early Saturday morning, however, residents of the city where the virus was first detected were jogging and practicing tai chi in a fog-shrouded park beside the mighty Yangtze River.

Life has largely returned to normal in the city of 11 million, even as the rest of the world grapples with the spread of the virus’ more contagious variants. The scourge has killed more than 2.1 million people worldwide.

Traffic was light in Wuhan but there was no sign of the barriers that a year ago isolated neighborhoods and confined people to their housing compounds and even apartments.

Wuhan accounted for the bulk of China’s 4,635 deaths from COVID-19, a number that has largely stayed static for months. The city has been largely free of further outbreaks since the lockdown was lifted on April 8, but questions persist as to where the virus originated and whether Wuhan and Chinese authorities acted fast enough and with sufficient transparency to allow the world to prepare for a pandemic.

The latest news on the COVID-19 pandemic

They said it: Vaccine freedom

A teenager was held in connection with the rape of a four-year-old girl at a village here, police said on Sunday, adding that...
Read more

The Bankers' loss could end up counting as a big blow to their title race which had gathered incredible speed when the season...
Read more

“We are American, too”: Hundreds in New York rally against anti-Asian...