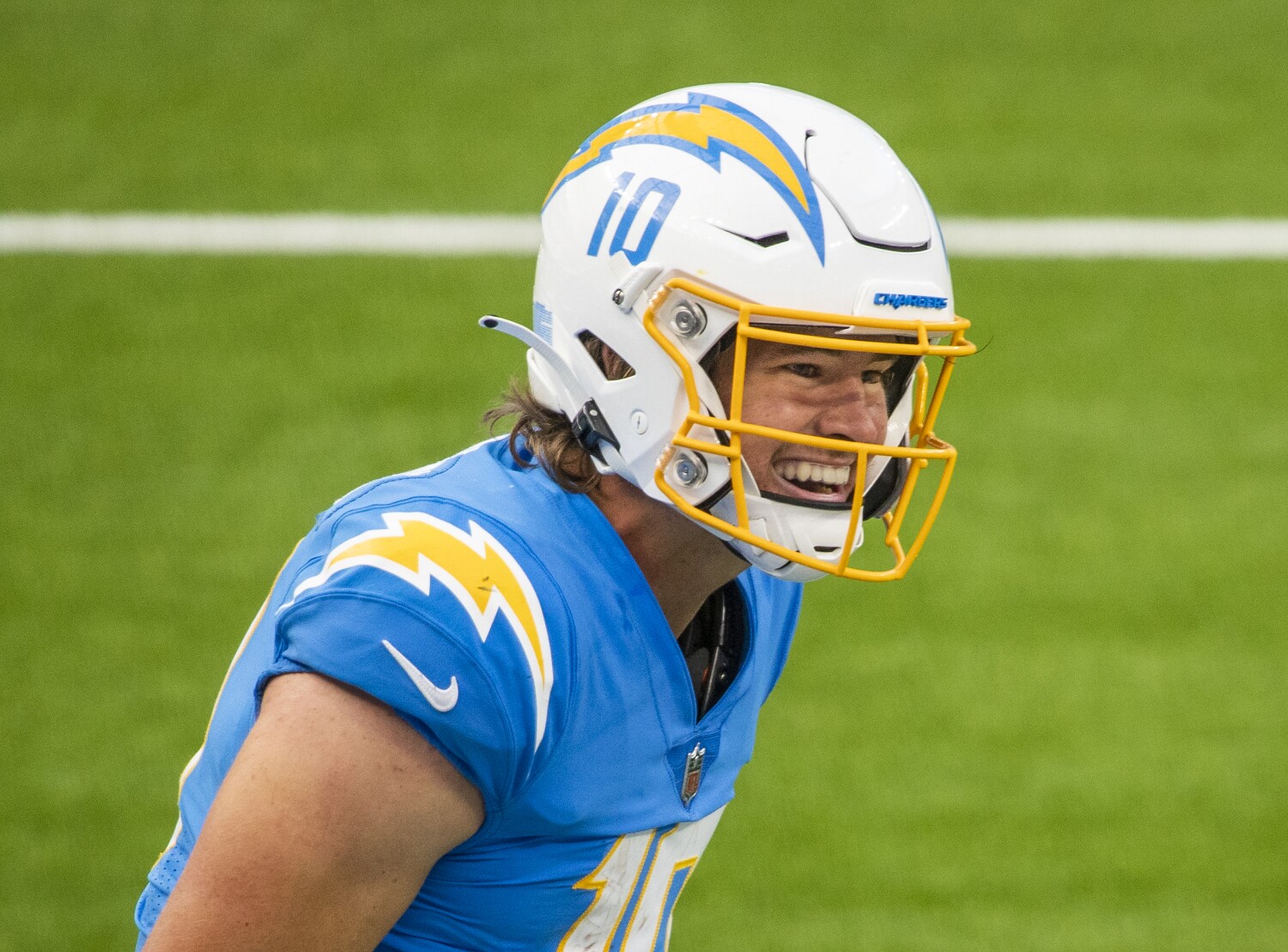 He had just finished doing research for an upcoming telecast when Rich Gannon met with a few members of the CBS production crew.

And understand, he wasn’t talking about Herbert’s physical ability, which has been trumpeted leaguewide for five games in a row in the form of eye-grabbing highlights.

Gannon’s assessment instead came after a Zoom call with the Chargers rookie quarterback.

“I guess he’s made it look easier because he’s such a smart guy,” Gannon said Wednesday. “That’s such a big part of playing that position. It isn’t just your physical talent. You have to be able to think quickly. He’s so good at that. I think that’s going to serve the Chargers well.”

Gannon knows a bit about playing quarterback in the NFL, something he did for 18 years and well enough for the Oakland Raiders to twice earn All-Pro honors.

He will call the Chargers game at Denver on Sunday, when Herbert makes his sixth start coming off a 347-yard, three-touchdown performance in a 39-29 victory over Jacksonville.

Herbert has finished with a passer rating of at least 111 in his last three starts, throwing 10 touchdowns to one interception.

In beating the Jaguars, he also led the Chargers in rushing with 66 yards — a franchise record for a quarterback — including a 31-yard keeper on a read-option that Herbert read perfectly.

“He has a natural feel for the game and can improvise,” Gannon said. “And not just playing street ball, but doing things that smart players do. If you’re doing that in Year One, what’s it going to look like in Year Five or Year 10?”

Gannon said he didn’t anticipate Herbert being able to move as well as he can for someone who is 6 feet 6, 236 pounds. He praised Herbert’s composure and grit, noting his “tough jaw.”

He also explained that he has been impressed by Herbert’s willingness to accept blame and deflect credit. When asked about his accomplishments, Herbert routinely points to the contributions of those around him.

“He’s got some humility to him, which is important,” Gannon said. “That’s how you win over a football team. That’s how it becomes your team. I think quickly that’s becoming his team.

“These guys today hear everything. They pay attention to what a kid in Herbert’s position says. This kid gets it. Everything he’s talked about — from taking over for Tyrod [Taylor] to his teammates, to the mistakes he’s made — he gets it.”

Herbert has proven himself more than capable of handling pressure, leading the NFL in passer rating against the blitz. He’s also No. 1 on third down, throwing six touchdowns with no interceptions.

The rest of the top five on third down includes Super Bowl-champion Patrick Mahomes and veterans Drew Brees and Ben Roethlisberger, who have a combined 37 seasons worth of NFL experience.

“Third down to me is a thinking man’s down,” Gannon said. “That’s where quarterbacks really separate themselves. He’s navigated his way through all that pretty nicely.

“These defensive coordinators spend so much time in their little offices into the wee hours to, quite frankly, find ways to screw with these young quarterbacks. But this kid obviously can absorb and process a lot of information quickly.”

Gannon said his biggest concern with Herbert is the same one other observers have expressed — his long-term health, especially after seeing some of the hits Herbert has taken.

During their Zoom conversation before the Chargers played Carolina in Week 3, Gannon said he told Herbert to watch Seattle’s Russell Wilson as an example of a quarterback who knows how to protect himself.

“I asked him if he ever played baseball growing up,” Gannon recalled. “He said he did. Well, he must have hit home runs every time and never had to slide into second.

“You can see he’s got some toughness to him. But you gotta learn. … When you have a quarterback who is 6-foot-6 and running around, it’s not a question of if, it’s a question of when someone gets a good shot on him.”

Right guard Trai Turner (groin) and his backup Ryan Groy (biceps) both missed practice Wednesday. Turner has been limited to one game and Groy left in the fourth quarter against Jacksonville. Scott Quessenberry took over at the position after Groy was injured. … Herbert was asked how much fun it is to throw a 70-yard pass. “It’s a lot of fun,” he said. “It’s even better when they catch it.”

Ravens and Steelers will try again Wednesday after postponements

Hugo Porta: Victory over the All Blacks an ’emotional’ moment for Argentina

How Mamelodi Sundowns could line-up against Maritzburg United

Masandawana are set to face a struggling Team of Choice side in a PSL encounter on Saturday. Goal selects the Brazilians' possible starting...
Read more

New York: Actor Tabu says her creative partnership with filmmaker Mira Nair makes them a “hit couple” and she believes that they are...
Read more