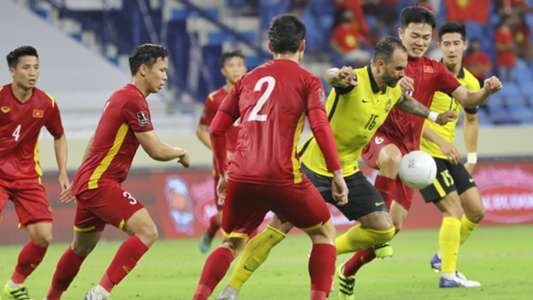 Failure to pick up all three points meant the end of the road for the World Cup for Malaysia after a promising start to the qualifying campaign.

Malaysia huffed and puffed against Vietnam in the penultimate Group G match of the joint 2022 World Cup/2023 Asian Cup qualification match but ultimately suffered again against their bogey side in recent times to bow out of contention for a place in the next round of the qualifiers.

Comparatively, it was a much higher energy performance and output from Tan Cheng Hoe’s boys than what was seen during the United Arab Emirates (UAE) match but still it wasn’t enough to overcome a resolute Vietnam side who adopted a far more cautious approach in the game than what they showed against Indonesia.

Cheng Hoe opted to give Guilherme de Paula a chance at redemption after a poor outing against UAE, brought back in Brendan Gan into the starting line-up and rewarded Syafiq Ahmad for his industrious play as a substitute in the first game with Liridon Krasniqi and Nor Azam Azih both dropping to the bench.

Park Hang-seo knew Malaysia had to go for the jugular and that meant gaps would be left at the back for their quick counter attacks to capitalise. While there were a few opportunities for the Golden Dragons using that tactic, their solitary goal came from a set piece situation which Malaysia failed to defend properly.

Aidil Zafuan’s headed clearance from a corner kick wasn’t far enough and that allowed Doan Van Hau to head the ball back into the danger zone in the 27th minute. As a handful of Malaysian players stood ball watching, Nguyen Tien Linh reacted quickest to head into an empty net.

After a strong start to the match, Malaysia allowed Vietnam back into the game by easing off midway through the half but found their second wind towards the end of the half. Coming close twice with a Syafiq header which Bui Tan Truong tipped over before the same keeper pushing out a Safawi Rasid free kick right before the half time whistle.

Desperate and knowing nothing but a victory would keep Malaysia in the hunt for progression, Cheng Hoe made a double substitution after the break with Nazmi Faiz and Akhyar Rashid coming on for Syafiq and Safawi, meanwhile Arif Aiman also got off the bench for his competitive international debut in place of Mohamadou Sumareh.

Malaysia continued to have more of the ball possession in the game but Vietnam were equally comfortable fending off any attacks. Just when all hopes seemed to be lost, Malaysia were offered a lifeline in the 70th minute when the referee judged Doan Van Hau to have fouled de Paula with the naturalised Brazilian dusting himself off to slammed home the equaliser.

While it was understandable that there were a lot of pent-up pressure released by scoring his first goal, the subsequent overexuberant celebrations only served to waste time when a quick restart was needed to chase a second goal that Malaysia needed from the game.

But instead of being inspired by the leveller, it was Vietnam who bounced back when they earned a penalty themselves after a tired looking Brendan tripped substitute Nguyen Van Toan inside the box. Up step Que Ngoc Hai who had little problem sending the ball past Farizal Marlias.

The higher octane performance was asked and delivered but without much direction and shape as Malaysia repeatedly were found wanting in the final third. There were very little attacking plan and when neither Safawi nor Sumareh were able to beat their markers, Tan Truong was left with little to do in the game than he might have anticipated.

One more game remain in the group for Malaysia and a place in the third qualifying round of the Asian Cup is still up for grabs with the result against Thailand dictacting whether it’s a place in the next group stage or a spot in the playoff.

On a day where Cheng Hoe also suffered a personal loss, the defeat and the subsequent meek bowing out of the World Cup path is hard to take after an inspired start to the campaign that begun two years ago which saw the team claiming three wins from five matches will no doubt leave a bittter taste in the mouth.