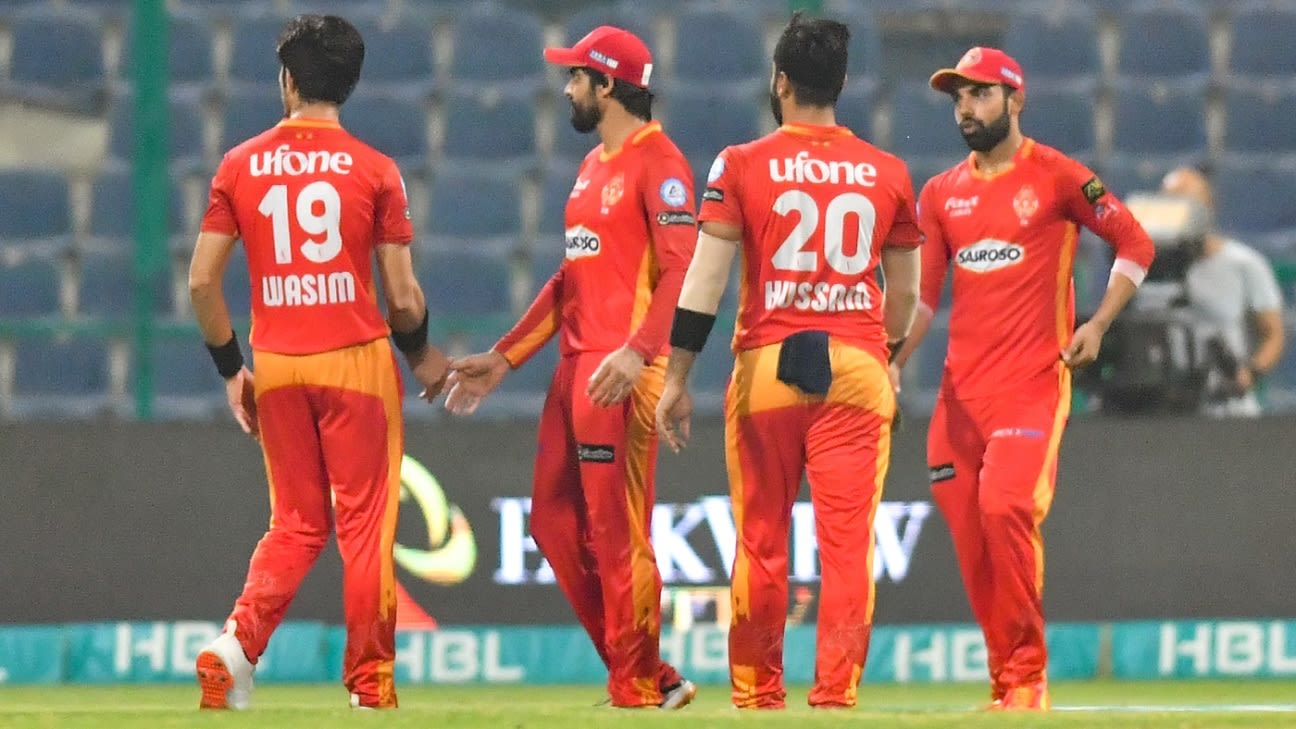 The two teams will meet again in Qualifier 1 on Monday, the winner of which will move to the final

There was little riding on this game, but that didn’t mean conventional PSL rules ceased to apply. Give Islamabad United a below-par chase, and they’ll eventually run it down.

In yet another exhibit of that maxim, Shadab Khan‘s side coasted – despite the slightly frantic final -ver finish – to an impressive four-wicket win against Multan Sultans thanks to a commanding bowling performance towards the back-end of the innings. Sultans’ collapse saw them lose all ten wickets for 56 runs after losing none in the first 9.3 overs after a promising start, and the 150 United needed was knocked off fairly routinely.
Both sides were aware this was little more than a dry run of the high-intensity qualifier they will contest on Monday, and as such, there was an experimental element to the contest. United rested their key openers as well as Hasan Ali, but Sultans made the early running with a sizzling 93-run partnership between Mohammad Rizwan and Shan Masood. But when Iftikhar Ahmed and Fawad Ahmed prised out the top three, the bottom hollowed out, allowing Mohammad Wasim – who’s also had a breakout tournament, a clear crack at the tail.

United’s start was authoritative without being explosive, but with an asking rate of 7.50, it didn’t need to be. Mohammad Akhlaq and Umar Amin followed the team philosophy of trying to exploit the powerplay overs, and the 54 they managed in the first six was more than adequate to keep them on course. A stuttering innings from Shadab, who looked severely affected by stifling heat at one point, still saw him compile 35 off 27, before Asif Ali was sent in to inflict the knockout punch. In his kind of form, under virtually no pressure, his 16-ball 25 took his side ever closer.

United may be annoyed at how deep they allowed Sultans to take it, with the contest appearing over long before the final leg-bye was actually taken. United perhaps lost focus slightly as Sultans continued to burrow their way back into the contest after Asif fell. Usman Qadir removed Brandon King and Shahnawaz Dahani’s stunning catch in the final over got rid of Talat, which suddenly meant United needed three of four. They got there in the end, making what should have been a thumping win look like an attritional one.

The heroics of Dahani and the fast-moving nature of the PSL meant Wasim flew under the radar for much of the past week. That wasn’t helped by a horror start to his day when he came in to bowl while Masood and Rizwan were in full flow. He was tonked for 18 in his first over. He was hauled off, but when he returned ten overs later, he seemed a transformed bowler.

Choosing his variations with guile and executing them with high class, he accounted for four Sultans batsmen, conceding just 13 further runs in his remaining three overs. Given the task of polishing up the tail in the final over, he did that, and then some. On Friday, Haris Rauf had ceded the momentum to the Sultans by leaking 24 in a similar situation, but Wasim’s final over permitted just two. He ended up taking three wickets in those final six balls, bowling out a Sultans side that hadn’t lost a single wicket till the tenth over.

Masood shines, no one else does

Sultans might have been trying to offer up a live-action animation of the phrase “innings of two halves” when they were put in to bat. Rizwan and Masood got them off to a start that was both blistering in its urgency and elegant in its implementation. There were few risks taken as Masood placed and timed his way to a sumptuous half-century; even the sixes he hit were risk-free drives through the line of the ball. They were rollicking along at nearly ten an over by the tenth over, the stage set for what might possibly be an immense finish.

In the tenth over, though, Iftikhar, off all people, struck in the only over he bowled, and once Masood departed, bedlam ensued. Multan went on to lose their ten wickets for a mere 56 runs, compiled painstakingly over a further 63 balls as an innings that promised so much petered out with no more than a whimper. United have a formidable record chasing totals; they have lost just 5 of 31 such games, and 150 was never going to challenge them.

The game guarantees Sultans will finish second, and play Islamabad United in the first qualifier, which takes place on Monday. Peshawar Zalmi and Karachi Kings finish third and fourth respectively. Lahore Qalandars – fifth – were eliminated over poor net run rate, tied on points with the teams at second, third and fourth.

Danyal Rasool is a sub-editor at ESPNcricinfo. @Danny61000