Home Sports rugby How the SF Giants built their winning culture (and got buy-in up... 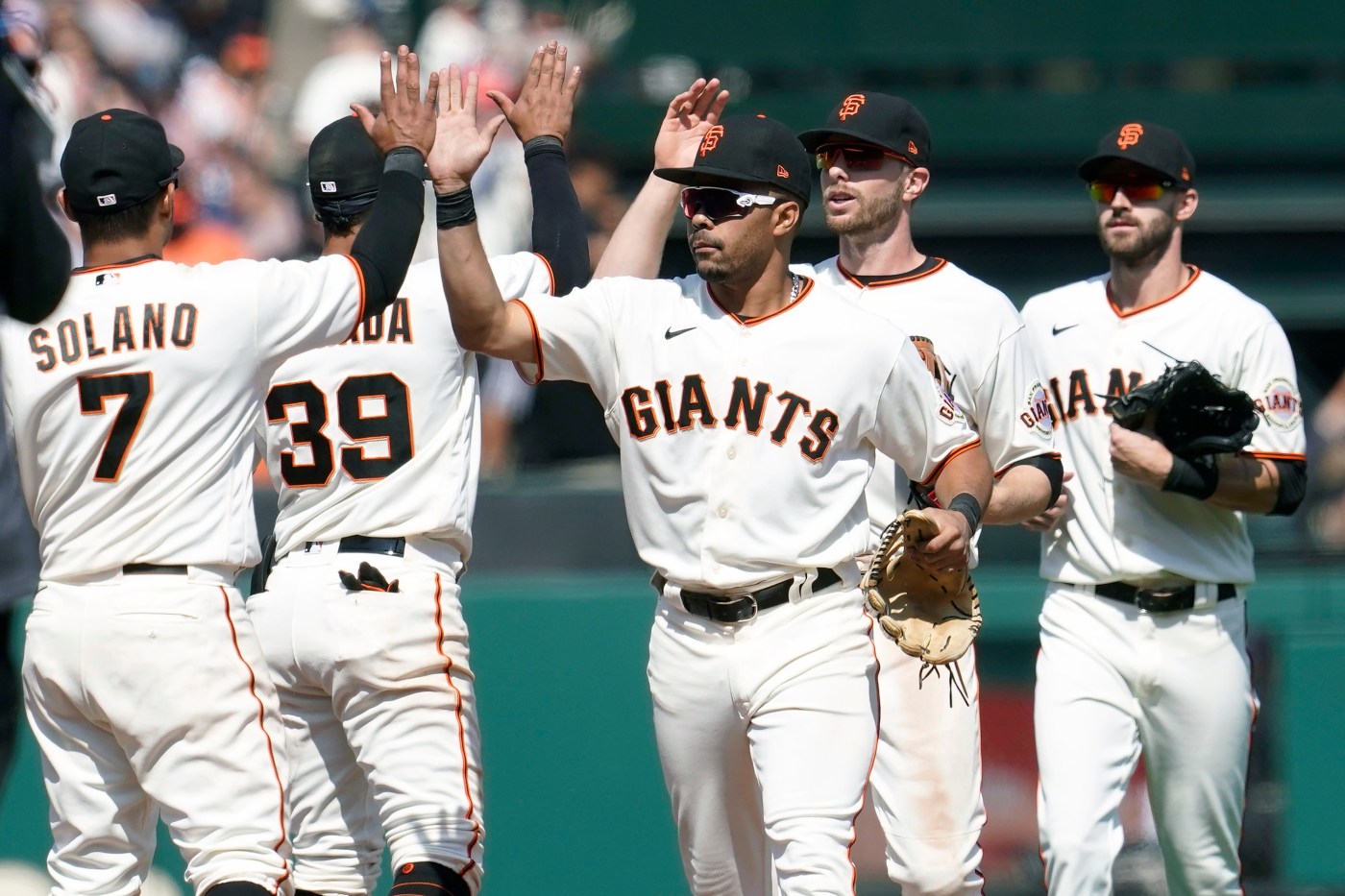 SAN FRANCISCO — After one of his best games of the 2021 season, Steven Duggar sat back and spoke candidly about the journey he wished he didn’t have to take to make a three-hit game at Coors Field possible.

“It definitely stings when you get sent down,” the Giants outfielder said following a 12-3 win last week. “It’s never a conversation you look forward to having by any means.”

Since making his major league debut in 2018, Duggar has had that harsh conversation nine times. The most recent came on August 7, when Giants manager Gabe Kapler informed Duggar he was headed back to Triple-A so the club could add reliever Zack Littell to help an exhausted bullpen.

“I acknowledge the fact I didn’t play up to my standards for that three-week stretch, a month,” said Duggar, who hit .164 with a .461 OPS in 79 at-bats before being sent down. “And I knew guys were getting healthy and coming back, so yeah, it sucks getting optioned. But I think quickly turning the page and understanding I’ve got my best baseball in front of me, that’s the way I approached it.”

When the Giants promoted him on September 5 to fill in for Austin Slater, who was placed on the seven-day concussion injured list, Duggar answered the call by yanking a two-run triple down the first base line off Dodgers star Walker Buehler.

The Giants won that game 6-4 and have won every game they’ve played since then too. The first team in the majors to clinch a playoff berth this season can point to the career years their best players are enjoying as the primary reason behind its success, but Duggar’s story and the many that sound just like his tell the tale of how the Giants rapidly created a selfless, winning culture.

The culture starts at the top of the organization with president of baseball operations Farhan Zaidi and Kapler, but extends far beyond the margins of the 26-man roster. In a season in which eight Opening Day starters and four members of the team’s starting rotation have had stints on the injured list, the Giants have counted on contributions from replacements at Triple-A Sacramento to maintain their momentum.

“Triple-A can be not the happiest place,” Kapler acknowledged recently. “Everybody at Triple-A wants to be in the big leagues. You get toward the end of the season and you start noticing that other people get called to the big leagues and maybe you’re not one of them.”

Of the 28 players on the Giants’ expanded September roster who were present for Monday’s playoff-clinching win over the Padres, seven had been optioned to Triple-A at least once this season. The pitcher who recorded the final out, Kervin Castro, spent the first five months of the season in the minors and was making just his second appearance for San Francisco.

Castro, a 22-year-old reliever and the youngest member of the 40-man roster, had the good fortune of being on the roster for the clinching victory. Sixteen members of the Triple-A Sacramento active roster including two players on major league rehab assignments, Alex Dickerson and Donovan Solano, had to watch a Giants team they’ve played for this season celebrate from afar.

Utility man Mauricio Dubón, who has 175 major league at-bats this year, was optioned hours before the Giants locked up their playoff berth.

“You have to stay ready,” Dubón said of being in constant limbo last week. “You can’t change the way you play just because you’re down there. You’ve got to take advantage of the stuff you get and try to be like you’re in the big leagues even though you’re not.”

The vast majority of Sacramento River Cats who have helped the Giants this season are now playing for the realistic chance to be back with the big league club for a potential division-clinching victory and postseason opportunity. Most position players know an injury could thrust them back into the picture at a moment’s notice while pitchers recognize the front office is seeking ways to keep a bullpen that’s been pushed to the brink this month fresh.

“A lot of the time you get caught by the business part of it,” Littell said. “Sometimes optioning has nothing to do with performance on the field, it’s just a matter of you’re the guy with options and there’s a roster crunch.”

Few, if any, teams have maximized the depth of their 40-man roster quite like the Giants, who have already made more than 20 roster moves in September and will assuredly make many more in the final three weeks of the season.

In past years, players have often talked about the mental toll they experience from being shuttled back and forth between the minors and the majors. Those players are still dealing with the familiar sense of frustration this year, but many have pointed to the leadership in the Giants’ clubhouse as one of the reasons they’ve maintained a positive outlook on their immediate future.

“I think the culture that’s been created from the top down with Buster (Posey) and (Evan Longoria) and (Brandon Crawford) and (Brandon) Belt, so many guys that set the standard,” Duggar said. “The culture permeates down into (Sacramento) and I think that plays a big part for sure, no doubt about it.”

Duggar and Dubón said they maintain open lines of communication with major league teammates during stints in the minors, which has played an important role in ensuring they’re ready to help the Giants when they do get another call. The Giants also ensure hitting coaches such as Donnie Ecker and Justin Viele are coordinating with Triple-A hitting coach Damon Minor to keep coaching points consistent.

“You’re grinding up here too, but it’s a little different down there,” outfielder LaMonte Wade Jr. said. “Because to come from that atmosphere and into this atmosphere and contribute on a team like this that’s competing for the division, it says a lot about the development staff and the coaching staff that’s in Sacramento.”

One of the first and most important steps the Giants took in creating a selfless culture took place in 2020, when Kapler and his coaching staff sought platoon advantages around the diamond. In the midst of strong years at the plate, Dickerson and Darin Ruf split playing time in left field so the Giants could have a left-handed bat in the lineup against right-handed starters and a right-handed bat in the lineup against southpaws.

After winning a Silver Slugger in 2020, Donovan Solano has shared playing time at second base with Tommy La Stella this season when both have been healthy to give the Giants the exact same opportunity to create a matchup advantage. Their willingness to support one another has rubbed off on younger players who see the value in the Giants’ aggressive substitution methods.

“We’ve got guys like Tommy (La Stella) and (Donovan Solano) who are plenty good to play everyday, but they understand with the way the team is built, we’re going to play matchups,” Littell said. “Having that mindset and seeing the guys who have been around and done this for a long time also embrace that role is useful and helpful for guys who come up here and say, ‘I’m going to follow their lead.’”

With veteran players accustomed to being in and out of the lineup and players with minor league options who know where they stand on the depth chart staying ready to contribute, the Giants have fostered impressive clubhouse chemistry that’s extended all the way up I-80 and into the River Cats’ clubhouse.

“A lot of the guys in Sacramento have been up here before and they’ve been other places before,” Wade said. “There’s a lot of experience in Sacramento and you can always lean on them for advice and everything. It helps when you’re coming back and forth because you know what to expect.”

The theme of players such as Wade and Thairo Estrada coming up from Sacramento and playing a huge role in the Giants’ success has continued throughout the year, but in the last month, a new trend has emerged that highlights an underrated component of the club’s ability to maintain its consistency.

With starters Johnny Cueto and Alex Wood on the injured list, the Giants have asked a number of relievers including Littell, Jarlín García and Dominic Leone to change and or expand their roles to help San Francisco’s pitching staff cover innings.

With Littell, García and others now stretched out to throw multiple innings and Leone moving from his role as a set-up man to an “opener,” the Giants’ staff hasn’t missed a beat despite losing two key members of its rotation.

The Giants’ roster may not have the same star power as the rival Dodgers, but with an emphasis on flexibility, selflessness and adaptability, a club that few foresaw as a playoff threat now has visions of playing deep into October.

2011-2021: How many friendly matches did India play during the FIFA International match calendar in the last 11 years?