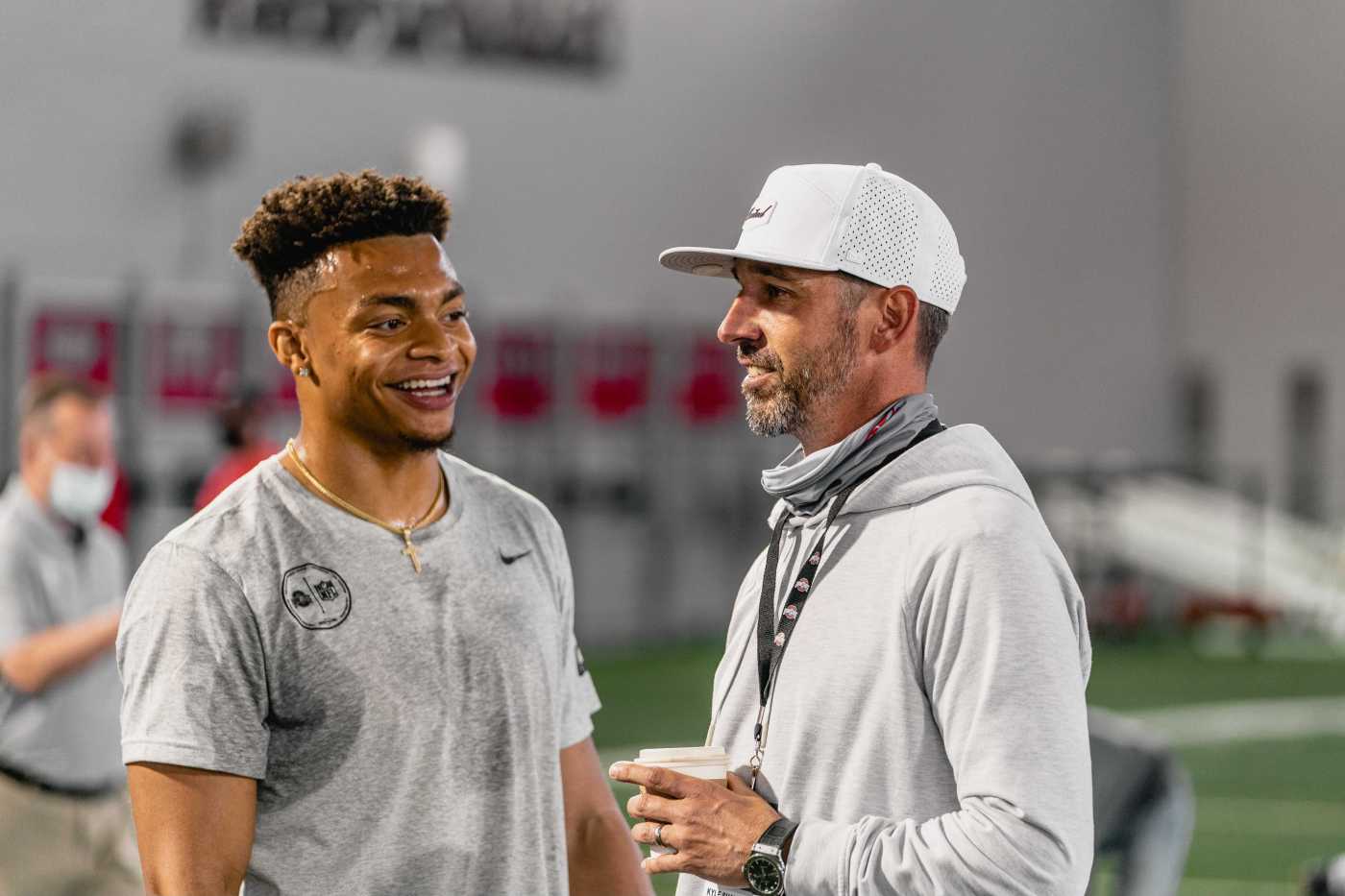 Justin Fields has known Kyle Shanahan longer than the other quarterbacks the 49ers might draft No. 3 overall.

What no one knows for sure, however, is how Shanahan’s offense and a playoff-caliber roster will look with Fields. Same goes for Alabama’s Mac Jones or North Dakota State’s Trey Lance.

That trio drew Shanahan and general manager John Lynch to recent pro-day workouts as they analyze who to draft, presumably after Trevor Lawrence and Zach Wilson go to the Jacksonville Jaguars and the New York Jets.

It’s all speculation until someone arrives on draft night April 29. To get a better picture, here is a panel of NFL experts offering their foresight (the first of our three-part series QB2021 Vision):

“If you want to take a little chance and have a sensational athlete, it’s Justin Fields. He’s a rare athletic quarterback, plus he’s a heck of a passer. He’s big enough, strong enough, terrific runner. He is more of a passing quarterback, that can run like crazy. He’s so strong in the pocket and played sensational games.

“He just doesn’t have the consistency of others. That’s OK. He transferred from Georgia, was going through the pandemic last year.

“If you coach this guy up in Kyle’s offense, he can be a superstar. He’s got enough arm. Got touch. Got quick enough release. I’m taking him in my mock draft.”

Phillips faced Shanahan’s 49ers as the Los Angeles Rams defensive coordinator from 2017-19 and he’s coached NFL defenses since 1976, including head-coaching stints with Denver, Dallas and Houston.

“Kyle didn’t have him but Mike Shanahan had Jake Plummer (in Denver, 2003-06), a run-and-throw type guy and did a good job with him. They’ll utilize what he does well, like he does with running backs.

“You’ve got to think Fields is the guy they might get. He can run and throw. Lance, you don’t know how well he throws. Then Jones is not a runner. Fields is more of the modern-day quarterback everyone is looking for, the Mahomes-type.”

Cosell is a senior producer at NFL Films and an analyst for ESPN’s NFL Matchup show.

“I don’t think Kyle’s theoretically changing the offense this offseason. Kyle’s offense, for the most part, he believes in it so much, and it’s incredibly well-structured. Now, if he gets Fields or Lance, does that add a concept or two because of mobility, yeah, but he’s not going to change the offense.

“I remember watching Justin Fields in his high school QB1 (Netflix) program. He was a talented kid then, and I didn’t connect the dots he was the kid at Ohio State until I looked into it, because he went to Georgia and transferred.

“In 2019, he had phenomenal numbers (41 touchdowns, three interceptions). I know it’s Ohio State and there’s great talent around you. You’re able to put defenses in a bind because of the level of play at your fingertips, like Mac Jones had at Alabama. They’re putting pressure on defenses. Now it comes down to decision-making, accuracy, leadership. I know there’ve been words on if is he committed and puts time into it. Here’s a perfect opp to quiet critics and become a workhorse at the next level. He can learn and compete with Jimmy (Garoppolo), and that makes the position better.

“If you’re looking at that (mobile) style of quarterback (between Fields and Lance), I’m going to go with the guy who’s played in bigger games, on a bigger stage, with more starts and has unbelievable statistics and the physical toughness.”

“You know very well Shanahan likes to move around, move the pocket and fly around. The No. 1 thing Shanahan loves is guys that can process multiple reads, get out in space and get rid of the ball, hitting crossing patterns, play-action and when you take that deep shot, it’s got to be a good ball.

“… Fields certainly brings that element of run that is very prevalent right now in the National Football League, in a good way.”

Brandt entered the Pro Football Hall of Fame two years ago. He became a full-time scout with the 49ers in 1958-59 before 29 years in the Dallas Cowboys’ personnel department. He is a weeknight host on SiriusXM NFL Radio.

“I think Justin Fields is going to be an excellent quarterback. I don’t know why he’s all over the board. Some people think he is the second or third player picked. Some people think he’s the 10th player picked. I think he will surprise everybody and I really think that that’s the quarterback that San Francisco will take with the third overall pick.”

Herbstreit is a fixture on ESPN’s College GameDay and has split time as a game analyst during his 25 years at the network. He played quarterback at Ohio State from 1989-92.

“Justin Fields to me is exactly where the NFL is trending as far as his physical skill set, and there’s a lot of evidence and proof and a lot of big games that he played in his career, so I guess my answer to that would be I love his versatility. He can throw the ball downfield. He can throw the ball intermediately. He’s got the levels concepts and he can create off-platform very comfortably so I don’t think you’re pigeon-holed if you take him.”

Kiper has led ESPN’s NFL Draft analysis since 1984. Jeremiah is in his 10th year at NFL Network after scouting for the Ravens, Browns and Eagles.

Kiper: “I would look at Justin Fields. I think he’s the second-best QB in the draft. But Mac Jones is the way it seems like it’s going. You think back to Mike Shanahan having John Elway and Steve Young. But you think about Kyle with Kirk Cousins, Matt Schaub and Matt Ryan. It’s hard to pinpoint what they really want, what Kyle and John Lynch, with Mike Shanahan being impactful in this decision.

“If you obviously want to go with the dual-threat, you take Justin Fields or Trey Lance. If you want the pocket guy who’s incredibly smart and can maneuver in the pocket extremely well, accurate to every level, off-the-charts intelligence, it would be Mac Jones.”

Jeremiah: “I would say the highest ceiling would be Justin Fields just because his speed and athleticism. … (He) can be a home run hitter as a runner. Just his speed makes him a little different there. You look at all three of those guys have strong arms. Fields has the ability to do as much as the other guys in terms of throwing the football. That to me would be kind of the tiebreaker in terms of where he can ultimately get.”

The skinny on Fields

— Two-year starter at Ohio State after transferring from Georgia, where he was a backup to Jake Fromm and left the program after enduring a racial taunt from the stands. He completed 68.4 percent of his Ohio State passes with 63 touchdowns and nine interceptions, plus 15 rushing touchdowns.

— Checked in at 6-foot-3, 228 pounds and ran a 4.4-second 40-yard dash at his initial pro day March 30. Shanahan and general manager John Lynch skipped that to attend one by Alabama’s Mac Jones on the same day, but Shanahan, Lynch and quarterbacks coach Rich Scangarello (who was at Ohio State’s first pro day) made it to Fields’ final audition last Wednesday.

— Fields passed for a career-high six touchdowns and 385 yards in a New Year’s Day win over Clemson (Sugar Bowl, CFP semifinal). That immediately followed a 12-of-27, two-interception dud against Northwestern.

“Going back to the Quarterback Collective (2017 summer clinic), I remember Coach Shanahan being a great coach, a great quarterbacks coach emphasizing keeping that base in the pocket,” Fields told me March 30 in a video call after his initial pro day at Ohio State.

“He’s a great offensive-minded coach and arguably one of the best coaches in the league,” Fields added. “It’s just an honor and blessing to be even looked at by them.”

If Fields becomes the 49ers’ pick, he’ll have to wait out or beat out Jimmy Garoppolo for a franchise steeped in quarterback lore but one that’s lacked a Pro Bowler behind center since 2002 (Garcia) and a 4,000-yard thrower since 2000 (Garcia).

Mendy tells Chelsea when to expect best of Werner and Havertz after difficult debut campaigns for German stars | Goal.com