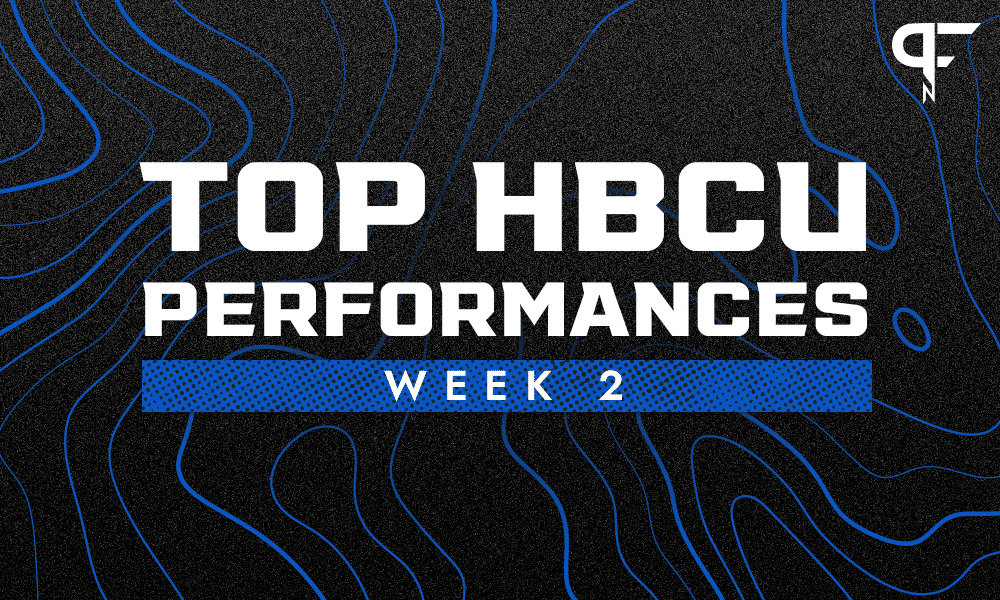 Each week of the college football season, HBCU football brings tradition, pageantry, impeccable halftime band presentations…and PFN’s top five performances. With 37 games in the Week 2 slate, there was no shortage of talent on display.

Two NFL legends faced off, but it was the father-son tandem that prevailed.

The younger Sanders executed offensive coordinator Jason Phillips’ game plan to a tee, completing 30 of 40 passes for 362 yards and 3 touchdowns. Sure, Sanders wasn’t asked to fire into tight windows or look deep often. But he was poised in the face of pressure, made the right decisions consistently, and delivered passes in rhythm.

Clemson paid South Carolina State $500,000 to endure a 49-3 drubbing in Week 2. While a nice contribution to the school’s athletic department, there was not much to take away from the outing. The Bulldogs’ lone bright spot came in CB Decobie Durant. Durant proved he is a legitimate NFL Draft prospect by holding his own against an FBS powerhouse.

While he gave up a handful of catches, including a touchdown (which seemed to be a coverage miscommunication), Durant snatched a pair of interceptions. The first was a heads-up grab on a tipped pass, and the other was on an overthrown pass that he tracked in the air through to his extended arms. He accumulated a pair of pass deflections and 3 tackles to boot.

The box score does not do Sidney Gibbs justice in Shaw’s 28-26 defeat to Davidson. Despite 15 carries for 110 yards and 1 score already worthy of a spot somewhere on this list, Gibbs took a fumble by Shaw QB Christian Peters for 92 yards, setting up a 4-yard touchdown pass.

Gibbs kept the Bears in the game, with his lone touchdown occurring with 4:36 left in the fourth quarter down by 8. Nevertheless, he failed to convert on the 2-point try. But that does not take away from his stellar performance.

Head coach Jason Rollins went with Glendon McDaniel as his QB against Miles, and he did not disappoint. The redshirt junior went 10/13 for 140 yards and 1 touchdown through the air. However, Southern’s ground game was the star of the show. On 39 carries, the Jaguars generated a whopping 323 yards and 5 scores, imposing their will on the not-so-Golden Bears’ defense.

Nelson Craig led the charge, taking 8 carries for 134 yards and a plunge past the pylon. Devon Benn added 62 yards and 2 TDs on 17 attempts. McDaniel had a pair of TDs himself, notching 8 rushes for 56 yards. Kobe Dillion (6 for 57), Jamar Washington (2 for 22), and Marquis McClain (2 for -8) round out the rushing attack.

For Southern to have such a relentless and overpowering showcase running the ball, their offensive line needed to deliver — and boy did they. OT Ja’Tyre Carter (first team), C Dallas Black (first), G Jonathan Bishop (first), G Brian Williams (first), and OT Jeremiah Stafford (second) all earned preseason All-SWAC honors for a reason. Keep your eye on Carter — listed at 6’5″ and 275 pounds (reportedly hovered around 305 during the summer) with impressive athletic ability, he could hear his name called in the 2022 NFL Draft.

While Lincoln (PA) is not a heavy hitter by any means, Central State handled their CIAA opponent 19-7. A key reason for their success was the play of linebackers Jamal Holloway and Kailen Abrams. In true stat-stuffing fashion, Holloway produced 13 tackles, 1.5 tackles for loss, 2 sacks, 2 forced fumbles, and a pass deflection for good measure.

Abrams did not quite match his teammate, but he produced nonetheless. He contributed 9 tackles, 2 sacks, and recovered a fumble. As a team, Central State held Lincoln to 246 yards of total offense on 77 plays — yes, 77! That is a paltry 3.2 yards per play, including 44 rushing yards on 45 attempts.

Which HBCU performances narrowly missed our top five for Week 2?

Is this the right time to trade away Chris Carson?