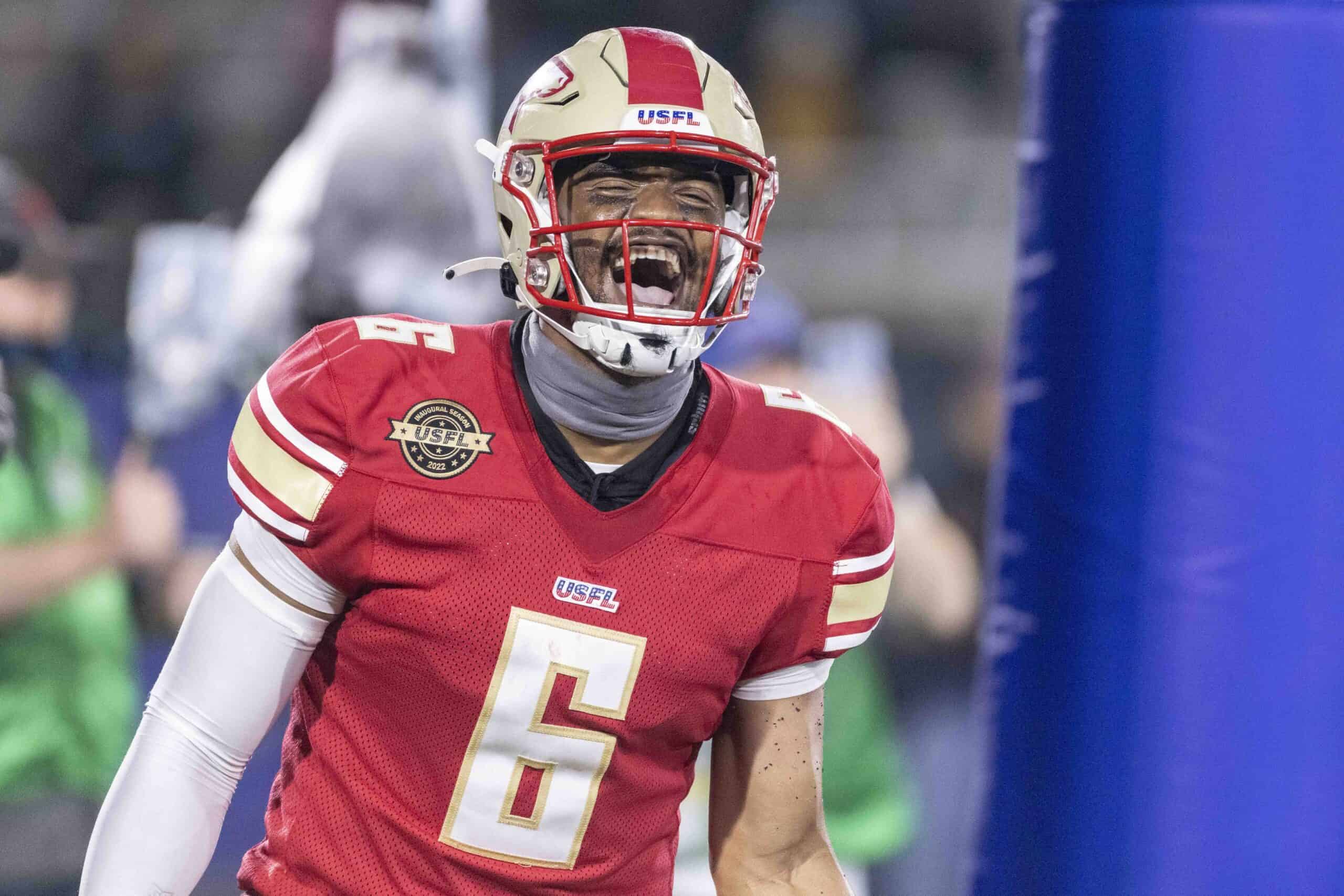 The first week of the USFL saw the return of fantasy football to keep us occupied this spring. The majority of the fantasy action for the USFL is in the form of DFS. However, with some hardcore fantasy players also playing in leagues, our Week 2 start/sit advice will look to cater to both aspects. Let’s examine which players fantasy managers should consider starts and sits in Week 2 of the USFL season.

This week, the four games will see the Michigan Panthers face the New Jersey Generals on Friday. Then, the Pittsburgh Maulers will face the Philadelphia Stars before the Birmingham Stallions face the Houston Gamblers on Saturday. On Sunday, the weekend rounds out with the New Orleans Breakers against the Tampa Bay Bandits.

If you are setting your lineup for the full weekend, J’Mar Smith is almost a slam dunk start. Alex McGough started last week but has been ruled out due to an ankle injury. Therefore, despite being priced as a backup on the full weekend DraftKings slate for Week 2 of the 2022 USFL fantasy season, Smith will draw the start.

If you drafted Smith or were lucky enough to add him off waivers this week, he could give your roster a tremendous boost. He performed admirably in a backup role, averaging 7.4 yards per pass with a passing touchdown. He also added a rushing touchdown on 3 carries.

When you look at the stats last week, Johnson was the highest-scoring QB. However, his $7,900 salary on DraftKings belies the risk of starting him this week. Most of Johnson’s value came through his work in the running game, including 2 touchdowns.

Usually, being involved in the running game is great for a QB’s value, but there’s a lot of uncertainty here. If Johnson were the starting QB, he would have immense value. However, he could sink fantasy teams if he sees limited snaps in a secondary role behind Luis Perez.

There was a lot of bad from the Panthers in the USFL’s first week, but entering Week 2, fantasy managers can find some hope in the backs’ performance. Stevie Scott III and Cameron Scarlett combined for 33 carries in a game where the Panthers trailed for large portions. They turned those carries into 138 yards and a touchdown.

The value on Scarlett in DFS this weekend is hard to pass up given the relatively even split and the Panthers’ seeming commitment to running the ball. Scarlett also received the first series of the game last week. He’s a fantastic budget option if you cannot afford to pay for Mark Thompson, who is probable to play.

B.J. Emmons looks like an ideal option given he was heavily involved in both elements of the offense. However, this week’s matchup with the Breakers is one to be cautious of. The Breakers held the Stars to just 73 rushing yards on 21 attempts, and 42 of those yards came on a single carry.

Meanwhile, Emmons managed just 40 yards on 19 carries. He relied on finding the end zone and catching all 3 of his targets for his solid output. Priced as one of the more expensive options for DFS this week, this might be time to look elsewhere. In conventional USFL fantasy leagues, if you have an alternative at the position with the prospect of double-digit touches, they might be a safer play.

The Stallions have a few nice receiving options this week. Osirus Mitchell is intriguingly priced on DraftKings given he averaged 19.2 yards per reception last week. If you’re playing in a season-long league, he’s a must-start this week until we see something change from those impressive numbers.

Yet, the intriguing option in that group is Marlon Williams. He put up a zero last week, but his 5 targets are certainly intriguing. If you’re looking for a cheap option that could be a game-week winner, Williams could be it.

The loss of JoJo Ward could change that. Ward saw 50% of the Gamblers’ targets last week, and his absence could funnel more work to Zuber. In season-long USFL fantasy leagues, this would be enough to make me ride with Zuber. However, that high price point in DFS is a concern.

This one really speaks for itself. Of the 32 passes thrown by Jordan Ta’amu, 11 went in the direction of Cheyenne O’Grady. If that continues, O’Grady could confirm himself as not just the TE1 of the Bandits but the No. 1 pass catcher.

O’Grady averaged just under 11 yards per reception, so unless he can become a consistent red-zone threat, his ceiling is somewhat limited. Nevertheless, if your USFL fantasy format means you have to start a tight end, then O’Grady is the top option right now.