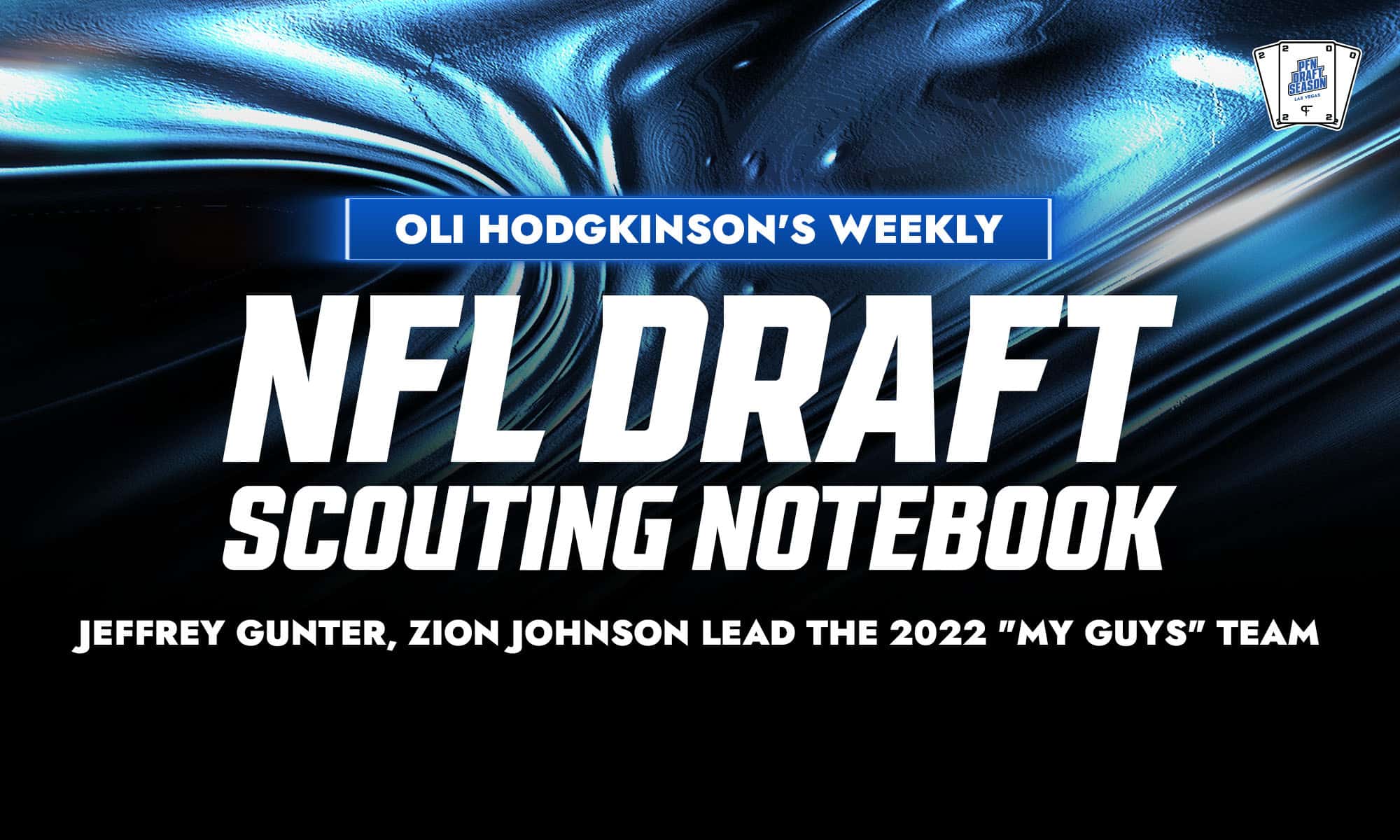 Our goal at Pro Football Network has always been to offer honest, insightful analysis. As we inch closer to the 2022 NFL Draft, we’re offering you a weekly glimpse inside the process that leads to the content you see on our site. In my weekly NFL Draft Scouting Notebook, you’ll find my thoughts on some of the prospects — in this class and in future classes — that have caught my eye and some of the backstories that don’t make it into my articles.

The NFL Draft is just around the corner, and time is running out to level up your knowledge on what your favorite team could do. Level up with PFN’s 2022 NFL Draft Guide before your team is on the clock to be the smartest fan in the room.

After nearly 12 months of evaluating the 2022 NFL Draft class, it’s just one week until we find out where the next step of the journey will take these prospects. There’s a natural affinity that you get for some players more than others during the process.

These are the guys you would pound the table for if you were an NFL GM. They’ve come to simply be known as “My Guys” for analysts and fans everywhere. These are “My Guys” of the 2022 NFL Draft.

Although the quarterback position in this 2022 NFL Draft class has been met with derision, the overall quality of offensive talent is extremely high. The offense for the “My Guys” team of the 2022 NFL Draft features a combination of highly ranked and — as far as I’m concerned — underrated prospects.

I had the opportunity to cover the Liberty Flames for a UK-based website called “The Touchdown” during the 2020 season. That year, Malik Willis emerged as one of the most entertaining quarterbacks in college football. In leading the Flames to fairytale wins over Virginia Tech and Coastal Carolina, Willis put himself at the forefront for a meteoric NFL Draft rise.

It’s been fun watching that ascension through this 2022 NFL Draft process. There have been times when it’s been a rollercoaster of highs and lows for the Liberty QB. However, Willis has showcased the arm talent and exceptional creative mobility to be a star. Meanwhile, the pre-draft process has allowed the world to see the humble, human side he offers away from the field.

Rachaad White‘s journey to the 2022 NFL Draft has been as winding as one of his runs through Pac-12 defenses during the last two seasons. From the University of Nebraska at Kearney, via Mt. San Antonio Community College, White finally made a home — and an impression — with the Arizona State Sun Devils.

White’s running style is as smooth as a knife through butter. For me, he’s the best pass-catching running back in the class. White possesses all the highlight tricks of the trade while having the contact balance to extend runs. Pass-catching backs with smoothness and elusiveness are extremely valuable at the next level, and White will provide excellent value for the NFL team that drafts him.

Despite an injury-interrupted career that has seen its fair share of disruption, Corey Sutton has still been one of the best deep threats in Sun Belt football over the past four seasons. Although he missed a whole year of football, Sutton still ended his Appalachian State career in the program’s top 10 for receiving touchdowns, yards, and receptions.

Sutton is a tall, physical wide receiver who showcased his skill set to NFL teams at the NFLPA Bowl. In addition to his size advantage, Sutton possesses excellent functional length, showcasing the ability to pluck the ball out of the sky with an impressive catch radius. Multiple offensive coordinators during his football career have allowed the Appalachian State receiver to be one of the most versatile pass catchers in the class.

“North Dakota State WR Christian Watson may just be the most exciting of them all.”

That quote is from an article written for Pro Football Network about FCS prospects in the NFL Draft. However, it wasn’t written in the midst of the most recent college football season. It wasn’t written as Watson’s stock accelerated into the stratosphere following an impressive showing at the Senior Bowl. Those words were written on July 2, 2020. It wasn’t hard to spot the NDSU WR’s talent back then. It certainly isn’t now.

Some tight ends are exceptional pass catchers. Others are impressive blockers. Few manage to excel in both areas, but Colorado State tight end Trey McBride does.

It’s easy to get drawn in by the gaudy pass-catching stats from his final collegiate season. As an evaluator, those and awards like the John Mackey Award don’t leave an impression as you look to project talent to the next level.

When you see a tight end embrace and even initiate contact as a blocker, that stands out to you. McBride is a physical beast who brings his physicality to work on every down. It shows in his ability to add yardage after the catch as a bulldozer through opposing defenses. It’s a physicality that can be traced all the way back to McBride’s upbringing, something I had the pleasure to discuss with him during this process.

I’ve honestly lost count of the number of times that I’ve reiterated my stance that if I were the Jacksonville Jaguars, I’d be running the 2022 NFL Draft card up to the Las Vegas podium with Evan Neal‘s name on it. There isn’t a more versatile offensive lineman in this class who combines that versatility with all the traits to be an excellent pass protector and run blocker at the NFL level. I’d want Neal to be the anchor of my offensive line for years to come if I were the GM of an NFL team.

I’m not sure there’s a more schematically and positionally more versatile offensive lineman in the 2022 NFL Draft than Boston College’s Zion Johnson. Having played in a triple-option offense for Davidson, Johnson’s played in multiple offensive systems while at Boston College.

The result is a player who can play zone and gap schemes. Meanwhile, he has collegiate experience at guard and tackle, and he took snaps at center during the Senior Bowl week. Stout, long, and strong, Johnson is an NFL star in the making.

Although it appears that Tyler Linderbaum may plummet out of the first round of the 2022 NFL Draft, he’s still very much a player I would pound the table for.

The Iowa center’s athleticism stands out on tape. I still vividly remember his teammate Tyler Goodson sprinting downfield for a touchdown, with Linderbaum in attendance the whole time. Combine that with his ability to win the trench battle with an exceptional understanding of leverages, and Linderbaum has the answers to many of the questions hanging over him.

Show me a guard who prises open rushing lanes with sheer brute strength and a mauling mentality and you’ll have my attention. Virginia Tech guard Lecitus Smith does exactly that.

While this season might not have been the most successful for the Hokies, watching Smith go to work in the season-opening shock win over North Carolina is seared into my brain. In a good way. Smith’s a stout, powerful blocker who will upgrade an NFL team’s offense as a nasty run-blocking presence.

During Shrine Bowl practices, Van Demark demonstrated the ability to eradicate the threat posed by both power and speed rushers. Meanwhile, he worked out at both bookends of the offensive line, helping him showcase versatility. Being over 6’6″ and possessing 35.5″ arms is a solid foundational base for being a decent offensive tackle.

You want your offensive “flex” player to contribute in several ways on the football field. How about a player who possesses the speed, vision, and physicality to be an excellent running back prospect? What if that player was also a natural pass catcher out of the backfield? How about if that same player had thrown multiple touchdown passes during his college career?