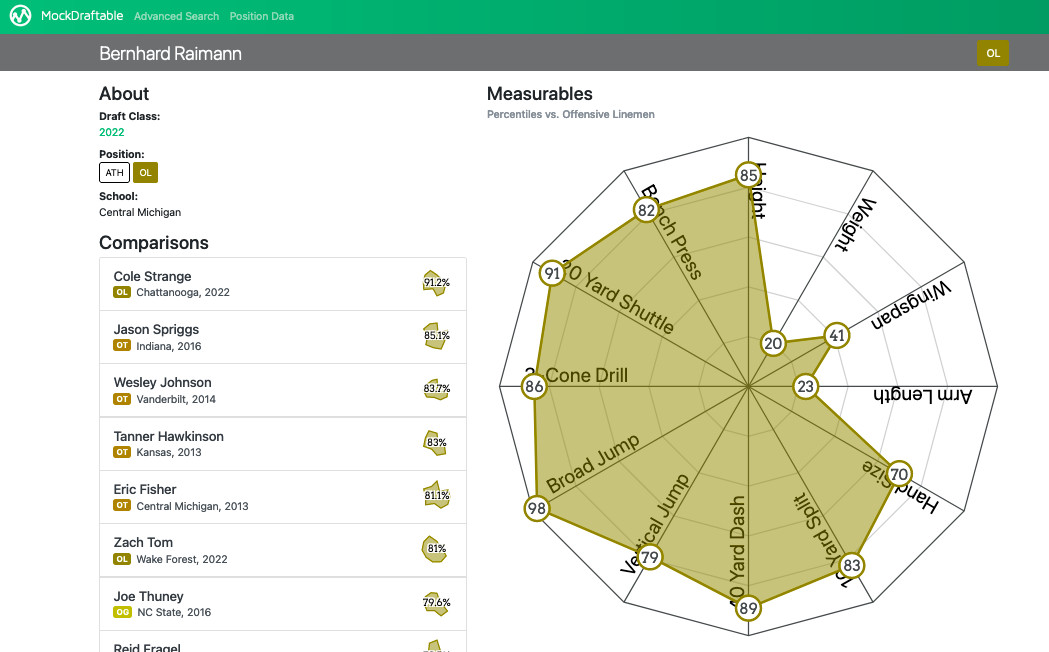 With the 28th overall pick of the 2022 Bleeding Green Nation Mock Draft, The Player Formerly Known As Mousecop selects

The tl;dr version: The Packers should be in win-now mode, and with a WR already selected, Raimann can fit nicely at right tackle for Aaron Rodgers’ last couple years.

The long version: In February of 1992, the Packers swung a trade with the Atlanta Falcons for Brett Favre, ushering in their greatest run since Vince Lombardi stepped down as head coach in 1968. When Favre retired (the first time), they handed the quarterback job to one Aaron Rodgers, which resulted in the Packers being fortunate enough to start a Hall of Famer every year for the last 30 seasons.

Here in 2022, though, Aaron Rodgers is 38, turning 39 before the end of the season. He’s signed through 2024 (technically 2026), and regardless of what you think of Jordon Love the Packers should be putting all their efforts toward winning a Super Bowl in the very near term. All of this is a roundabout way of saying the Packers should absolutely be drafting for positional need over best player available.

After resigning and then trading Davante Adams, the Packers’ needs are (in rough priority order): wide receiver, offensive tackle, defensive end, tight end, and maybe safety. Thanks to co-GM Leo Bedio, the Packers have grabbed wideout Treylon Burks. Will he be able to replace Adams’ production? No, but that’s an impossible standard to hold a rookie to. With their second pick of the round the Packers should a) get an OT, b) go DE, or c) trade down into the early second round. Since c is not an option in this mock draft, the choice is between OT and DE. Looking at their board here, they would see:

For me, it’s down to Mafe and Raimann for pick 28 (and Penning; I’ll address him later). I consider tackle the more needed position for the Packers at this junction. Last year they had a mix-and-match offensive line that is all too familiar to anyone who watched the Eagles in 2020: while All-Pro left tackle David Bakhtiari recovered from a torn ACL, Elgton Jenkins moved over from left guard, where he had a Pro Bowl season in 2020, only to suffer a torn ACL of his own. Bakhtiari should be available to start the season and Jenkins at some point in 2022. However, they lost guard Lucas Patrick and right tackle Billy Turner this offseason, as well as backup tackle Dennis Kelly, although Kelly remains a free agent. If the season started today, Yosuah Nijiman would probably be the starting right tackle for the Packers, backed up by Cole Van Lanen (one career snap). Given the injury histories on this line, getting a strong tackle is urgent.

Austrian-born Bernhard Raimann was originally a tight end from his days as an exchange student in high school, maintaining that position through his first two years in Central Michigan. In 2020, he decided to learn to play tackle by watching YouTube videos. He would then send videos of himself in the yard to his coach at Central Michigan. He then moved to the tackle position for the remainder of his college career. Clearly, this worked out as he proceeded to give up a single sack across two years of playing tackle, that coming in the first week of the 2021 season.

Here’s an interview with NFL Network where he outlines the process of moving to tackle:

In measurable terms, what immediate leaps out is Raimann’s athleticism:

That spider chart overlaps well with his most common NFL comparison, 2013 first overall pick Eric Fisher. Coincidentally, Eric Fisher was the last Central Michigan player taken in the first round, and one of two along with longtime 49ers tackle Joe Staley. Like Fisher, Raimann has a very high scores on most mobility measurements while being slightly underweight (20th percentile in weight is about 10 pounds less than 50th percentile).

Across most scouting reports, Raimann’s strengths are:

How would he fit?

Raimann would immediately project as the starting right tackle, letting Jenkins go back to his stronger position at left guard. If Bakhtiari isn’t the same player coming off that ACL tear, Raimann can also play left tackle. This would let Nijiman go to a swing backup tackle position to make the Packers would feel safer about keeping Rodgers upright. As a side note, positional fit is one reason why the Packers would pass on Tyler Linderbaum: Josh Meyers is good enough to let them feel safe moving into the 2022 season.

Why not Trevor Penning?

If you believe Penning is better than Raimann, I’m not here to argue with you. Without the information available only to NFL scouting offices, I can’t sit here and definitively tell you whether Penning or Raimann will be the better player. Pro football focus says Raimann is about 10 picks better than Penning, and Tankathon says Penning is 15 picks better than Raimann. NFL.com’s grades put them almost exactly equal, and I think that you couldn’t go wrong either way.

What differentiates most draft busts from true pros is not just raw skill (something every first rounder has), but the work ethic to put in the time in practice, in the weight room, rehabbing inevitable injuries, and watching game film to always improve. What brought me to Raimann over any other choice was how when he was stuck at home, he spent his time growing as a player, learning an entirely new position well enough that he now is a potential first round pick two years later. None of this is a knock on Penning, just an area where Raimann excels.

Bernhard Raimann has the right combination of skill, athleticism, positional fit, and immense work ethic to make him the right call for the Green Bay Packers at pick 28.

P.S. I’d like to thank Bleeding Green Nation for hosting this annual community mock draft. It’s been a novel experience to both write this and read all everyone else’s reasoning. Also, thanks to Leo Bedio for picking a wide receiver so I had more options here at pick 28! Thanks for reading!

Do you approve of this pick?

Now it’s time for you to vote for who YOU think should be selected next in the 2022 BGN Community Consensus Mock Draft.

Who should the Buccaneers pick at No. 28?