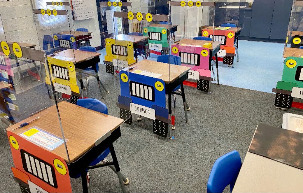 ANTIOCH — Students will be able to choose this fall from full in-person or a new virtual K-8 academy named after Antioch’s first black resident, Thomas Gaines.

The academy, first presented to the Antioch Unified School District  board on Wednesday, was unanimously approved during a special meeting on Friday.

In her earlier presentation, Associate Superintendent of Educational Services Christine Ibarra told the board that while many assumed that students were struggling with distance learning, others were thriving and preferred it.

“It’s worked well for them in this virtual environment. They felt like they have a stronger connection with their teachers and they’re able to interact with them in ways that they weren’t necessarily able or felt comfortable in interacting with them in a comprehensive or normal in-person classroom,” she said. “And, so for that reason, there may be several students that would like to have a virtual academy model as an option.”

Ibarra also said a number of families want to remain in distance learning for another year when school reopens on Aug. 5. “Just as you know, to give COVID another year to pass through,” she said.

In the past year, a design team has looked at ways to put together a permanent virtual academy that would better meet the needs of students based on the premise that “not one- size-fits-all,” she said.

The new virtual academy will be flexible, mastery-based and aims to accommodate different students’ needs, interests and learning styles, according to the report.

Ibarra said the academy would be a separate and innovative approach to learning for the future.

Elementary and middle school students also still have the option of Encore Homeschool, or for high school students, alternative schools such as Prospect High School or independent study that offers a virtual option.

“So, it (the new academy) will be a place where students will have voice and choice in their learning where students will be involved in their goal, their own goal setting and monitoring,” she said. “It won’t be just something that …  teachers are saying you must learn here.”

Ibarra asked that the new permanent virtual academy be named after Gaines, a former slave who came to Antioch in 1860, lived on the waterfront, and was for decades, the city’s only Black resident.

“We feel that he is a very important part of Antioch history, and that’s why we are recommending or asking the board to consider that name,” she said.

“From what I understand of the Virtual Learning Academy, I think it’s a great opportunity to sort of marry history of Thomas Gaines and all that he contributed to the development of Antioch, both in terms of his actions as well as symbolically, as sort of pairing with where we are now,” he said.

“’I’m glad that we’re naming it after Thomas Gaines,” Hernandez said. “I think it’s great to have our schools rooted in the histories and traditions of the city.”

School board President Ellie Householder said she believes in offering the alternative curriculum.

“As disappointing as last year has been, this has accelerated this (academy), I know that we’ve been talking about doing this type of alternative structure for our K-8 students for a while,” she said. “And so, it’s a great silver lining that we’re, we’re doing this now.”

Parents will have until July 5 to submit a request to enroll their students in the new virtual academy and will be notified by Aug. 5 if they have been accepted.

For more information, go to https://www.antiochschools.net.