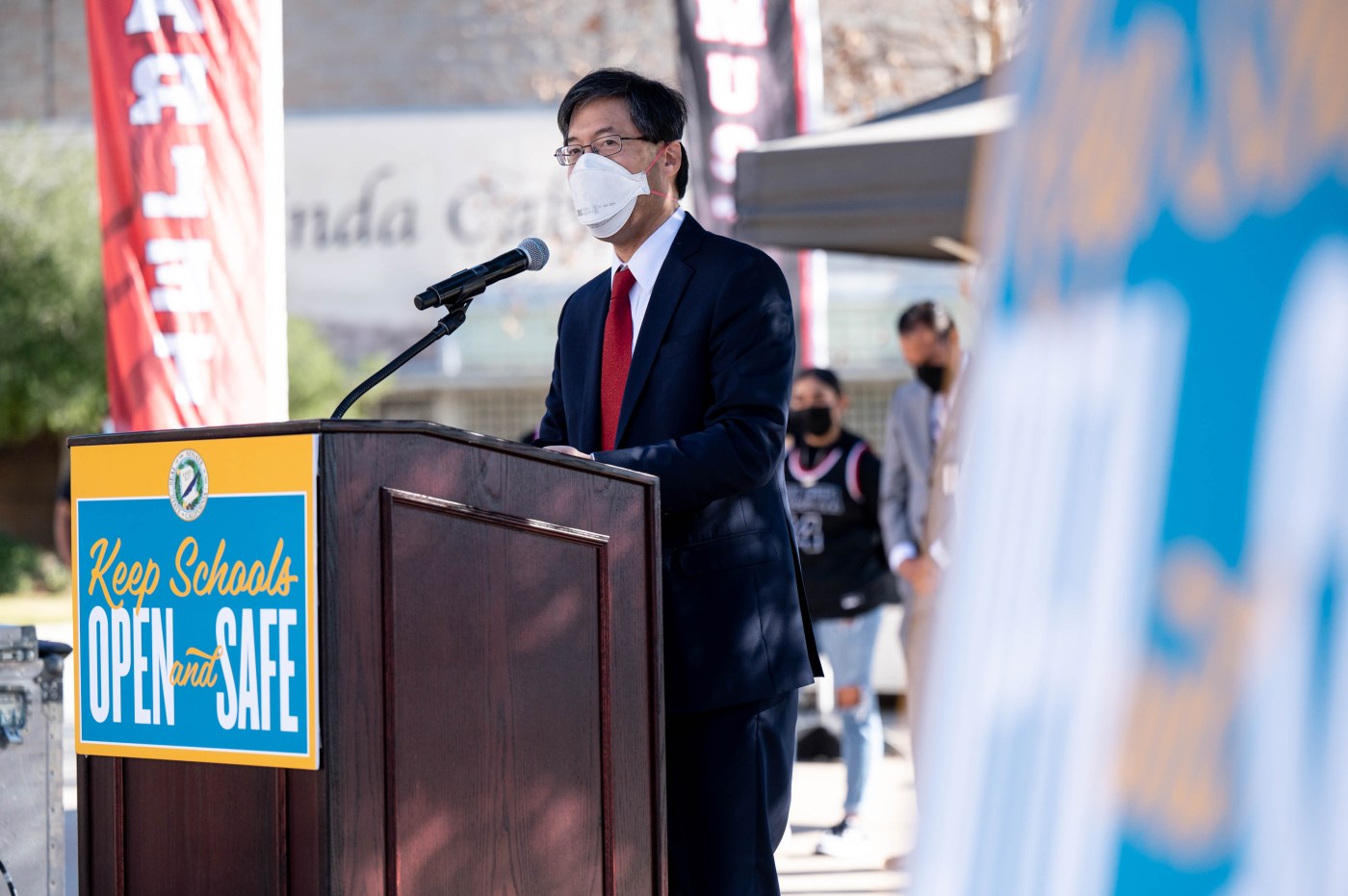 A state senator Monday turned up the heat in the COVID-19 school vaccine mandate wars with new legislation that nixes personal belief exemptions just as two Bay Area districts are set to require the shots in coming weeks — and as thousands of their students remain unvaccinated.

Sen. Richard Pan’s bill would not take effect until January 2023 if approved, but unlike most other coronavirus vaccine mandates, it would disallow personal belief exemptions for the COVID-19 vaccines just as his controversial 2015 bill did for 10 other inoculations the state already requires for children to attend school.

Gov. Gavin Newsom last fall said California will require the COVID-19 vaccines for school attendance once the U.S. Food and Drug Administration grants full approval to the shots for a broader age range — they’re now given under emergency use authorization for ages 5-15. FDA approval could come by this summer and the state mandate implemented by next fall. Newsom said a personal belief exemption would be allowed, but Pan’s bill does away with that.

“The most effective way to keep schools open and safe is to ensure the COVID vaccination rate of students and school staff is as high as possible in addition to masks, testing, and good ventilation to minimize infections,” said Pan, D-Sacramento, a pediatrician and a parent of two school students. “My legislation will give parents great certainty that their child is unlikely to get seriously sick and their school will stay open during COVID.”

Pan’s bill, like another by fellow Democratic Senator Scott Weiner of San Francisco introduced Friday to allow students ages 12 and older to be vaccinated without a parent’s permission, didn’t sit well with families that aren’t convinced yet the vaccines are safe and effective.

“Everybody should have (the right) to choose,” said Laura Braziel, whose 13-year-old daughter is a 7th grader at Pinole Valley Middle School, and is a plaintiff in a lawsuit against the West Contra Costa Unified School District’s COVID-19 vaccine mandate set to kick in next month. “You shouldn’t have to pull your kid out of school.”

Pan’s bill comes as tensions rise over a handful of districts around the state that adopted their own vaccine requirements ahead of Newsom’s announcement. Those include the state’s largest, Los Angeles Unified and San Diego Unified.

San Diego school trustee Richard Barrera, who spoke at a news conference Monday with Pan, said his district is appealing the ruling.

In the Bay Area, districts in Oakland, Berkeley, Piedmont, Hayward and West Contra Costa County have already adopted vaccine requirements for students, although some are more strict than others. For example, Berkeley and Hayward allowed students who hadn’t met a deadline for the shots the option of taking weekly COVID tests to continue attending classes. Piedmont saw little opposition.

Oakland Unified, which allows personal belief exemptions with a doctor’s note in its COVID-19 vaccine requirement, moved the deadline last month from Jan. 3 to Jan. 31 when it became apparent that nearly 6,000 students ages 12 and older had not confirmed being vaccinated. But as of Monday, more than 4,300 Oakland students had still not reported being inoculated, nearly 29%.

Families who don’t meet the deadline can opt for the district’s Sojourner Truth Independent Study Program for online learning.

West Contra Costa Unified, which doesn’t allow a personal belief exemption, also extended its deadline to Feb. 18, after the vaccination status of some 1,600 students remained unknown. Families who don’t meet the deadline will have to enroll in the district’s independent study program, Vista Virtual Academy, or leave the district.

But Braziel doesn’t think the district can accommodate all the unvaccinated students in the virtual academy and is hoping the district will back off, or be forced to drop it by the lawsuit. Braziel said she’s not against any vaccination, her daughter has had the 10 required shots for measles and other diseases.

But she said she remains uncomfortable with the COVID-19 vaccines because they are only about a year old, use new messenger-RNA technology and aren’t fully approved but under emergency use for children under 16, which also shields the manufacturer from liability. She says she might feel more comfortable with the shots after FDA approval, and doesn’t feel like the district should be forcing the vaccine on children.

“They’re saying you have to get your child vaccinated, but you’re responsible if anything happens with the vaccine, and that’s not OK,” Braziel said. She and other parents opposed to the district mandate plan to rally in front of the Martinez courthouse before a hearing on the lawsuit Feb. 16, two days before the district mandate.

Pan says his bill is motivated by other parents who are afraid to send their children to school, fearing they’ll be infected by classmates with COVID-19.

“We have actually a lot of children who are not attending school right now,” Pan said, “not because their parents don’t want to get them vaccinated, but because they’re afraid their child is going to get infected and even bring it home, where there may be vulnerable family members and vulnerable people living in their household.”