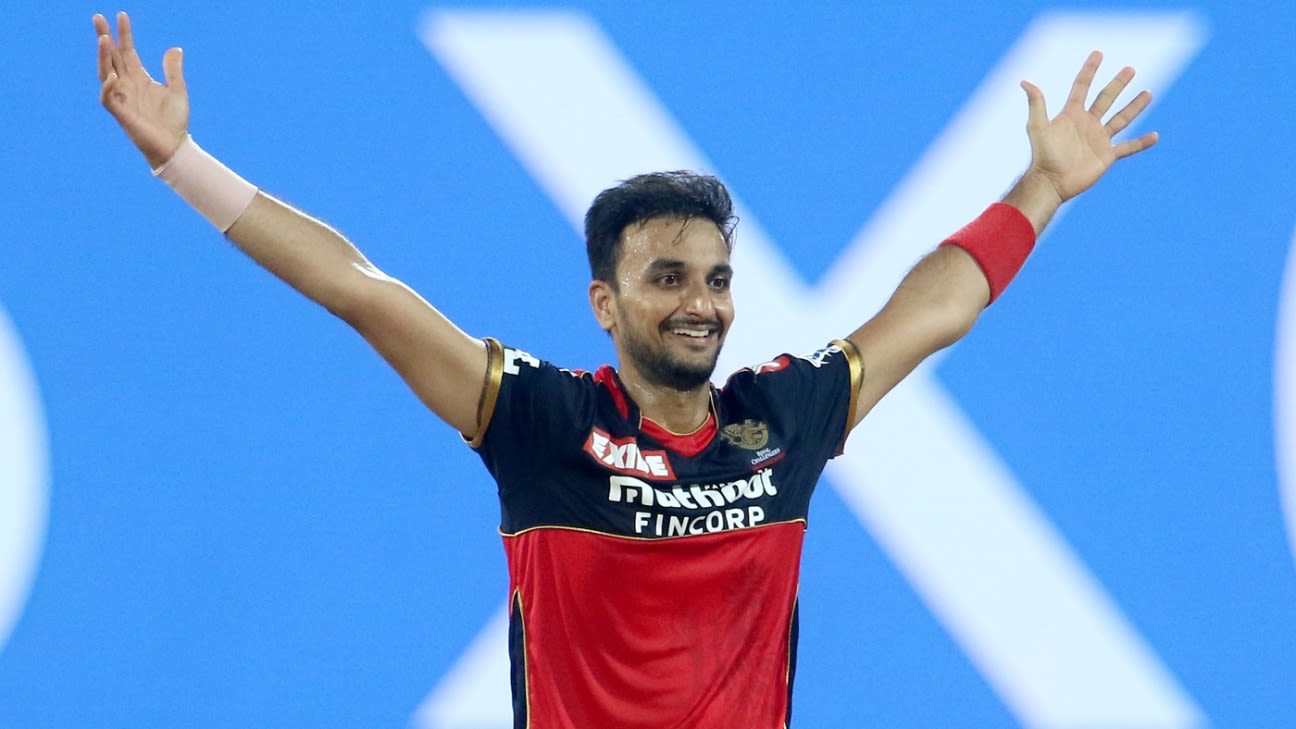 For Harshal Patel, being asked to bowl at the death in a T20 game is to be in a “privileged position”, one that he says he has worked hard to earn after being a bit of a journeyman in the IPL since 2012. The first shot at the new responsibility has gone well for him, as he returned 5 for 27 for the Royal Challengers Bangalore against the Mumbai Indians, but Patel knows, and understands, that it won’t always be so – “it goes the other way around as well at times”.

“It is one of those aspects of the game where you are in a position to win the game for your team and is a privileged position to be in,” he said in a virtual interaction with the media on Tuesday. “Obviously, it goes the other way around as well at times – it can dent your confidence – but I look at as a privilege and a positive.

“Death bowling is something I’ve worked on for a while for a long period of time, and I am confident enough now to take all that practice into the game.”

He did that in the opening game of IPL 2021, not only returning a five-for, but bowling three of his four overs and picking up all five wickets in the final five overs of Mumbai Indians’ innings. While Patel has shone the brightest, he hasn’t been the only non-international Indian quick to be given the big job this season. The Delhi Capitals bowled Avesh Khan against the Chennai Super Kings, and the Rajasthan Royals and the Punjab Kings threw the ball to Chetan Sakariya and Arshdeep Singh respectively during their contest on Monday.

A bit of a trend? Or just a matter of being early days of teams trying to get their combinations right?

“Most of the teams have started looking at what the bowler is doing during the practice games and how good they are at their execution regardless of what their stature is – whether they are capped, uncapped, international players and so on,” Patel said. “But I think it is a good trend, which people are starting to realise that even the uncapped bowlers are good enough to take responsibilities of death bowling, and I think we’ll see more of that going forward.”

Patel’s victims last Friday were Hardik Pandya, Ishan Kishan, Krunal Pandya, Kieron Pollard and Marco Jansen, all strikes where he outsmarted the batsmen. Patel explained that bowling to Virat Kohli and AB de Villiers, among others, in the nets has given him the required confidence of landing it right in matches.

“Every time you bowl to these greats of the game in the nets, you realise that the margin of error is very little,” he said. “That allows you to become more and more concise in your execution, and when you execute against these guys then it gives you a lot of confidence; if you can do it against the best, then you can do it in any game situation.”

Away from the IPL, Patel had a most impressive 2019-20 domestic season, with 52 wickets and 292 runs in the first-class Ranji Trophy for his state Haryana, to go with 374 runs and 19 wickets in the T20 Syed Mushtaq Ali Trophy. But he couldn’t quite squeeze into the Delhi Capitals playing XI. He managed just five matches for them last season, and acknowledged that the move back to the Royal Challengers has been a big positive.

“I have more opportunities here [with the Royal Challengers], and am being put into difficult situations, and thus have more opportunity to showcase my skill,” he said. “[The move] is a welcome decision from my side because I knew that with KG [Kagiso Rabada] and [Anrich] Nortje in that team, I wasn’t going to get the opportunity that I am getting here.

Himanshu Agrawal is a sub-editor at ESPNcricinfo