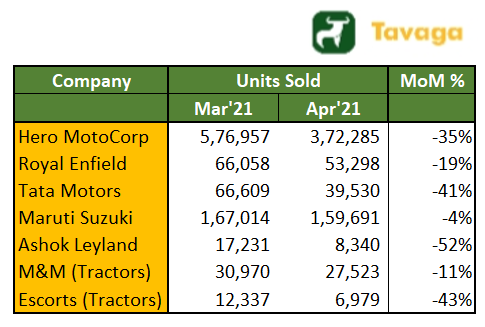 In 2020, April was the first month under nationwide lockdown trigged by the Coronavirus. Given all companies were shut, April auto sales numbers were zero. Hence, a month-on-month comparison will be more appropriate to determine the trends in Auto sales in April 2021. As expected, most of the companies recorded degrowth of their sales figures in April’21 as compared to Mar’21 due to fresh lockdowns imposed amid the 2nd wave of covid.

Auto Sales were Taken a Hit Across All Segments-

Mahindra and Mahindra’s automotive segment witnessed a squeeze in sales to the tune of 9.8% m-o-m while it sold 16,147 e-three wheelers in the month of April. Maruti Suzuki (NS:) also posted a degrowth of 4.3% in April as compared to 167k units sold in March’21.

While exports for the company continued to rise, it’s the local demand which seems to be tainted for the automakers. Domestic sales for Tata Motors (NS:) also fell to 39k units in April as compared to 66k in March, that’s a 41% decrease on an M-o-M basis. The majority decline in Tata’s sales came from its commercial vehicle segment which saw a shrink of 59% M-o-M.

On the commercial and agriculture vehicle front, Escorts Ltd. (NSE: NS:) sold 6979 tractors in April’21 as compared to 12,200 in March’21. The automakers said that the supply chain isn’t an issue for them as they have maintained a significant inventory to serve the pent-up demand once the Covid-19 situation improves.

The two-wheeler segment, like the rest of the industry, has also witnessed a contraction in demand. With factories and retail outlets shut, companies like Royal Enfield or Hero MotoCorp (NS:) have recorded a month-on-month decline in sales figures. While Hero’s sales fell by 35.4%, Royal Enfield bikes sold 19% fewer bikes in April’21 as compared to March’21.

Impact of the Oxygen Shortage

Unavailability of oxygen as the country fights with covid and ongoing supply chain disruptions can further dent the growth of the automobile industry in India. The coming pair of months seem grim as many industries are partially shut and domestic demand has taken a hit.

GST revenue continued to stay above Rs. 1 Lakh crore for the 7th straight month. GST revenue for March 2021 came in at Rs. 1.41 crore, 14% higher as compared to February’21. Going ahead, GST revenue is expected to take a hit in April as many states including Maharashtra and Delhi have imposed a partial lockdown up to May 15.

During March, Indian businesses complied with paying their Goods and Services Tax dues as GST revenues from domestic transactions increased by 21% as compared to the previous month. The steady increase in GST revenue and the quick economic recovery have reduced its speed as controlling the virus becomes the main objective right now.

As supported by the lower base, Eight-core industries expanded in March to the tune of 6.8%. this comes after a 3.8% decline seen in February’21. Eight-core could further see a decline in April as industries shut down and the state comes under partial lockdowns. Demand has also taken a hit which will reflect negatively on the consumption patterns. 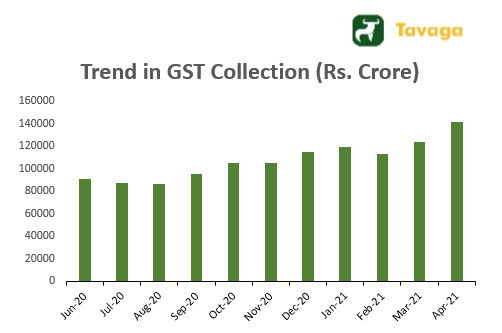 China Mobile to List in Shanghai as It Departs NYSE

Opinion | I’m a Trauma Surgeon in Israel. In My Hospital,...

Random: What If Nintendo Made A LEGO Mario Kart Game?

India women get another Test match, this time in Australia during...