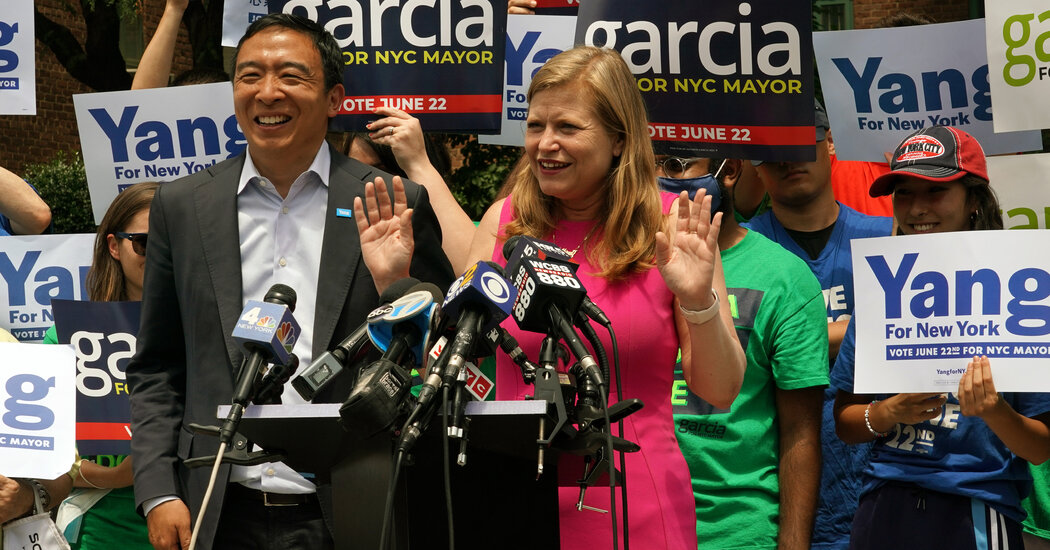 Andrew Yang and Kathryn Garcia, two leading candidates in the New York City mayor’s race, joined each other on the campaign trail on Saturday, a late alliance that prompted their top rival, Eric Adams, to criticize the event as an effort to weaken the voice of minority voters.

Mr. Yang and Ms. Garcia fell just short of an official cross-endorsement; they passed out fliers at a rally in Queens that featured their photos and names side by side.

The display of unity, just three days before the Democratic primary on June 22, appeared to be aimed at Mr. Adams, the Brooklyn borough president who has been leading in the polls. The reaction from Mr. Adams and his supporters illustrated the complex racial dynamics of the campaign as the candidates jockey for different swaths of the city.

“This is a cynical attempt by Garcia & Yang to disenfranchise Black voters,” she said on Twitter. “We didn’t march in the streets all summer last year and organize for generations just so that some Rich businessman and bureaucrat who don’t relate to the masses can steal the election from us.”

The new ranked-choice voting system, in which voters can list up to five candidates on a ballot in ranked preference, has made campaign strategies more complicated. Candidates are not just asking for votes; they need to convince as many of their rivals’ backers as possible to rank them second or third. If Mr. Yang and Ms. Garcia can convince their supporters not to rank Mr. Adams, that could significantly hurt him.

Mr. Adams said on Saturday that the alliance between Mr. Yang and Ms. Garcia was hypocritical and aimed at preventing a “person of color” from winning the race.

“I think it’s a level of hypocrisy,” Mr. Adams said, standing on Sheridan Avenue in the Bronx, where a man was shot as two children scrambled to get out of the way this week. “We heard Kathryn talk about how Yang treated her as a woman. We heard how she felt he did not have the experience, the know-how, to run the city.”

“For them to come together like they are doing in the last three days, they’re saying we can’t trust a person of color to be the mayor of the City of New York when this city is overwhelmingly people of color,” Mr. Adams added.

Mr. Adams clarified later that he felt Mr. Yang and Ms. Garcia were trying to prevent a Black or Latino person from becoming mayor.

At a separate news conference, Mr. Yang responded, “I would tell Eric Adams that I’ve been Asian my entire life.”

Mr. Sharpton took a different tone than his daughter, and said candidates were free to make their own strategic decisions about how to encourage voter turnout.

Mr. Sharpton, who has not shared his personal rankings publicly, suggested that Mr. Adams’s strategy appeared to be centered on attracting as many Black and Latino voters as possible in places like the Bronx, Central Harlem and Central Brooklyn, and making inroads with moderate white voters. Public polls suggest that Mr. Adams has a clear advantage with Black voters, but Mr. Yang and Ms. Garcia are also competing for Latino and moderate white voters.

“He’ll get some moderate white voters because of his crime stand,” Mr. Sharpton said of Mr. Adams. “With this uptick in violence, he’s the one that’s taken the definitive stand in terms of public safety.”

At the joint rally in Flushing, Queens, Ms. Garcia praised Mr. Yang and said they shared some of the same stances, but she stopped short of cross-endorsing him or asking voters to rank him second.

“I am not telling my voters what to do,” Ms. Garcia told reporters, adding that she would be open to campaigning with other candidates.

Mr. Yang had made clear that the rally was aimed at Mr. Adams.

“There’s some candidates I do not think should be anywhere near City Hall. One of them — his union endorsed me this week and that should be all you need to know,” Mr. Yang said in reference to the police captains union and to Mr. Adams, who is a former police captain.

Ms. Wiley said on Saturday that she was offered the opportunity to campaign with Mr. Yang and Ms. Garcia. But “she couldn’t do it” after Mr. Yang’s comments at the final debate about wanting to get people with mental health problems off the streets.

Ms. Wiley declined to criticize her rivals on Saturday, even as she seemed to dismiss the possibility of doing something similar.

Several of Mr. Adams’s supporters expressed concern about the joint appearance, saying that it underscored their concerns with ranked-choice voting more broadly. Former Gov. David A. Paterson said he was having conversations with community leaders about a possible statement raising concerns about the process, which he said was “giving candidates the opportunity to work around a process which they would otherwise lose.”

“It feels insidious to me,” he said.

Ms. Garcia has been trying to increase her support in the Black community. Her aides said that the campaign of Raymond J. McGuire, a former Wall Street executive, approached her campaign two weeks ago to discuss a cross-endorsement. After a forum, Ms. Garcia approached Mr. McGuire and said: “We should talk.”

The plan was progressing until Mr. McGuire’s campaign changed its mind, and felt that the cross-endorsement would not help them because they already had white supporters, according to a person familiar with the matter.

“It didn’t work out,” Annika Reno, a spokeswoman for Ms. Garcia, said, confirming the negotiations. “We’re looking forward to the election.”