Home Breaking Which Is Your Favourite Of Mira Rajput’s Many Looks In Her Post?... 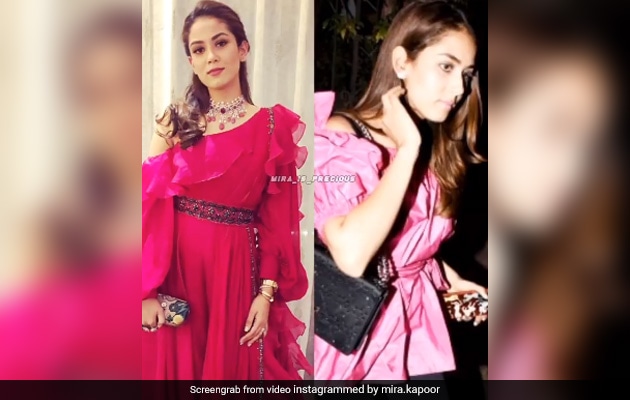 Mira Rajput in a still from the video.(Image courtesy: mira.kapoor)

Shahid Kapoor’s wife Mira Rajput sure is a stunner and has always been known for her on-point fashion game. Mira, on Thursday, added a pop of colour to Instagram with a compilation video of all of her glamorous looks over the years. The video that is created by a fan consists of a series of many then and now collages of Mira. Every collage comprises one old and one recent picture of Mira Rajput dressed in the outfits of a particular colour. The video marks Mira Rajput’s very own version of I Could Be Every Colour Instagram trend. Sharing the video on Instagram, Mira asked her followers to choose their favourite look. “I could be every colour I like. Which one is your favourite?” she wrote in the caption of the post.

Mira’s Instafam chimed in and commented on the post revealing their favourite look. Most of them dropped heart and fire emojis in the comments section of the post.

Yesterday, Mira Rajput gave use a glimpse of her board game session with Shahid Kapoor. She shared a video, in which we can see Shahid nailing the game of carrom board. If you think that the couple were the only players of the game, then you are wrong. They were joined by Shahid’s mother, actress Neelima Azeem, and brother, actor Ishaan Khatter. “Queen and cover with the pro Shahid Kapoor. The Pro-League continues Neelima Azeem, Ishaan Khatter,” Mira wrote in the caption of the video.

Check out the video here:

Coming back to Mira Rajput’s fashion game, she has a very interesting Instagram profile featuring some of the trendiest looks. Recently, she had dropped a picture of herself dressed in a simple yet elegant white shirt. She paired the shirt with a silver necklace.

Here are some more trendy looks of Mira Rajput from her Instagram feed:

Shahid Kapoor and Mira Rajput got married in 2015. They are parents to two children – Zain and Misha.