This “Happy Soul’ Is Twirling On Set. See Inside 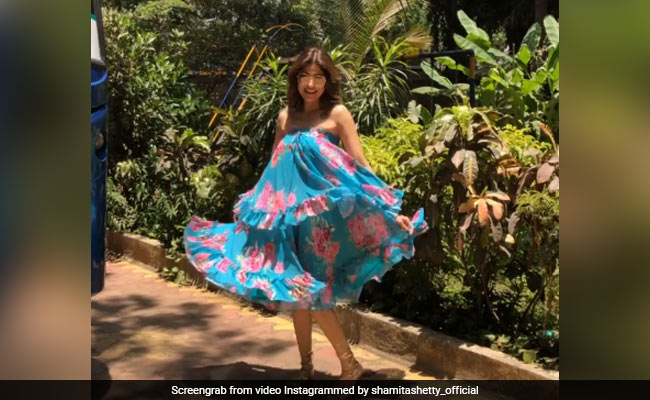 Shamita Shetty in a still from the boomerang video.(Image courtesy: shamitashetty_official)

Shamita Shetty twirled her way into Thursday. The actress switched on her fun mode and checked into Instagram. Wearing a pretty off-shoulder blue frock, Shamita is clearly a happy soul. In her latest post on the platform, the 42-year-old can be seen wearing a summery frock paired with shades and tie-up gladiator sandals. The caption read, “Happy me.” Shamita is currently shooting for her upcoming film The Tenant, directed by Sushrut Jain. The boomerang has been viewed more than 14k times.

In case you have missed it in the previous post, we bring you a clear image of Shamita’s tattoo. Shared on the movie’s Instagram page, the ink is of a lotus in a mandala. It is temporary though and for her role in the film.

Shamita shares sneak peeks from the sets of The Tenant, every now and then. In 2019, she posted a BTS video and expressed her excitement about working on the film. “BTS of my film The Tenant. It was hot…hot…hot on set! But, on the whole, it was one of my best experiences… Sushrut Jain, you are a dream to work with! Can’t wait for you guys to watch the film…Releasing 2020!”

Speaking about the film, the actress had said, “It is about the journey of a girl who has come from a different world, into a very conservative society. It basically revolves around the hypocrisy in the society that we live in today.”

Shamita is the younger sister of actress-entrepreneur Shilpa Shetty. She is best known for her performances in films like Mohabbatein, Mere Yaar Ki Shaadi Hai and Zeher. Her last screen appearance was in the web series Black Widows, directed by Birsa Dasgupta. It is a crime thriller that revolves around the lives of three friends played by Mona Singh, Shamita Shetty and Swastika Mukherjee.