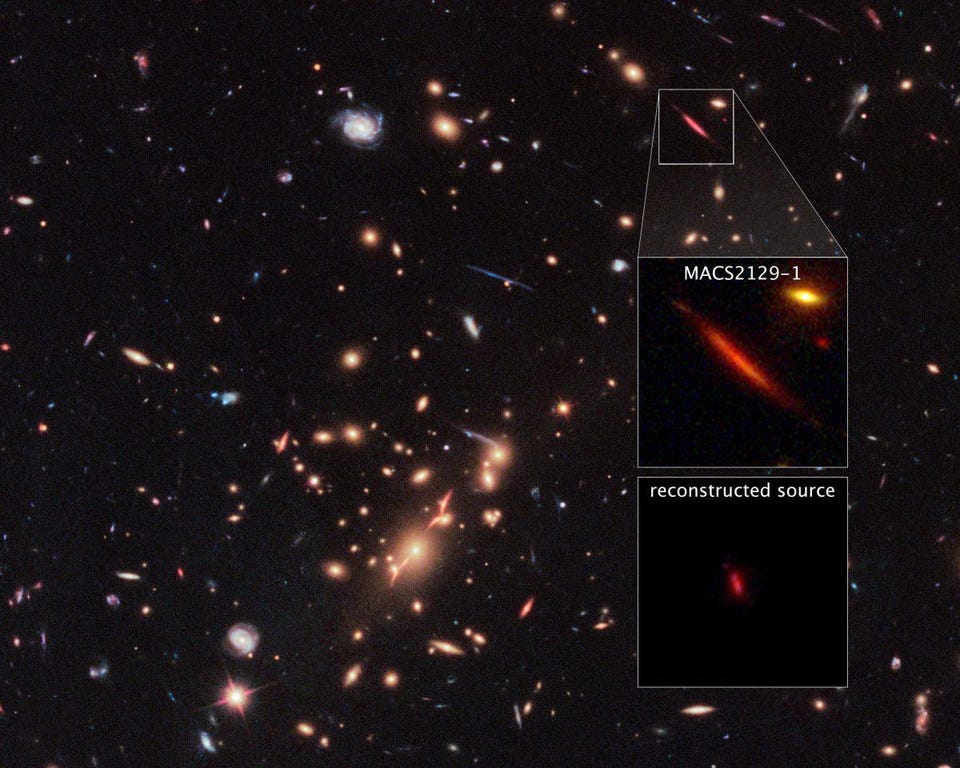 At present, as we near the end of 2021, many events seem to be shaking the foundations of our society. The combination of social unrest, widespread injustices, political polarization, and a still-raging global pandemic seem to be afflicting humanity on a worldwide, global scale. Meanwhile, global problems such as a warming planet, food and water insecurity, and pollution that now extends to outer space are all progressively worsening, with no foreseeable end in sight. And yet, despite the problems we face, there’s a reason to not only be optimistic about our future, but to be thankful for: the power of science to light a path forward.

There’s a remarkable fact about our world and Universe that’s greatly underappreciated, but that might just be the most powerful realization of all: the entire Universe, no matter what circumstances we view or experiment with it under, always obeys the same physical rules and laws. Moreover, those rules and laws themselves can be understood. When we do understand them and the relationships between various properties in a physical system, we can even predict — quantitatively — what the outcomes or most probable outcomes will be of a system that begins with any particular set of initial conditions. We’ve learned so much and know how to learn even more of what we’re seeking. That, the scientific truths that underlie our existence, is something to always be thankful for.

You can imagine a Universe that didn’t obey consistent rules from one moment to the next. Where gravity strengthened, weakened, reversed sign or turned itself off completely in an unpredictable fashion. Where atoms changed in size and orientation and in terms of the bonds they formed with other atoms at random. Where light traveled not at a constant speed, but varied throughout time and space. And where atomic nuclei didn’t remain in the same stable configurations over time, but would decay or fuse without an apparent cause and with unstable rules, unlike the reality we inhabit today.

But that’s not our reality. Our reality, instead, is one that can be understood through scientific inquiry. Where the laws and relationships between fundamental, elementary, indivisible entities — particles, including when they behave as waves — are the same everywhere in the Universe and at all times. When we discover a truth about our physical reality, it remains true, even if we somehow lose that knowledge. When we rediscover it, the rediscovered truth is no different, implying that if we needed to rediscover everything we’ve ever learned from scratch, not only could we do it, but we would reach the exact same conclusions that we’ve reached at present. Only through science is such a feat possible.

When we look at the various problems facing our society, the ones that have a scientific solution are the ones we should be investing in most heavily. Investment, in this case, means a combination of four different things, all at once.

The fact that we’re even capable of taking these steps is something to be grateful for and appreciate of. The ability to agree on a set of facts about what is real and what is, at the very least, not yet confirmed to be real is essential to reaching a consensus conclusion about what ought to be done about those problems. Despite the polarized climate of our society over divisive and ideological issues, more of us than you might expect — including people on the “other side” of certain issues from you — are wholly interested in knowing, unambiguously, whether various assertions are actually true or not.

Even though the myriad of problems facing humanity at present may seem intimidating and, at times, insurmountable, the truth is that science has made tremendous progress on each and every one. If we’re willing to take those four steps, we can quickly and easily go so much farther, benefitting not only every living human on our planet today, but all those who’ll come after us for generations and millennia down the line. Here are a few examples of those problems that science is far closer to solving than most of us realize.

The COVID-19 pandemic. Despite the mixed messaging that’s out there, the science concerning COVID-19 is overwhelming. This is a novel coronavirus that entered the human population in late 2019, has mutated numerous times and will continue to mutate, leading to death and long-term complications in many of those who do get infected. We know that:

are all effective interventions, particularly when everyone does them and does them all simultaneously. Getting infected offers inconsistent, unreliable protection compared to getting vaccinated. The risks of vaccination are vanishingly small in all populations, particularly when compared to the consequences of getting COVID, including among pregnant individuals. Additionally, the lab leak suggestion remains an unsubstantiated conspiracy theory, unsupported by even a shred of the scientific evidence. As cases again begin to spike worldwide, it’s important to remember this: it’s never too late to follow the science.

The global warming crisis. In many ways, the global warming problem is a greenhouse gas problem, and the greenhouse gas problem is an energy problem. Humanity demands large amounts of energy, both per capita and overall, to run our daily lives, from our ubiquitous electronic devices to heating and cooling our homes to transporting ourselves to our various locations. If we could cleanly and sustainably produce and transmit that electrical energy, the crisis could be averted.

This is precisely that science, coupled with collective action, can solve. Nuclear fission and renewable technologies can, either on their own or in concert, replace our fossil fuel-reliant energy economy. The development of nuclear fusion would be an added boon, but it’s not necessary to solve these present woes. We know how much carbon we’re emitting and have dramatically improved our understanding of (and reduced the errors on) how our greenhouse gas emissions are impacting global temperatures, ocean acidification, and disrupting the jet stream, among other effects. Science is our guiding light in combatting the damage we’re doing to our environment. It’s up to us to follow its advice.

The space pollution problem. This is a relatively new one, as the number of active satellites in low-Earth orbit has practically doubled in the last two years, and is set to double again eight times over in the next decade. This is already having a number of deleterious effects on Earth, including:

among many other concerns. And yet, despite the tremendous and creeping challenges facing us on this front, science again holds the answer. We can quantify the risks and effects that satellites will have, and that is precisely what will enable us — if we so choose — to responsibly regulate this environment: mitigating possible damages while maximizing the effective use of space as human-benefitting infrastructure. By following and listening to the best advice that science has to offer, we can make the most responsible choices available to us.

The replication crisis in science. This is not a crisis, but rather a tremendous feature. Many of the studies initially conducted and published, particularly with low sample sizes and at the margins of what’s considered “significant,” have their initial conclusions — where they did see a novel effect — overturned with more and better data. This is a wonderful insight to how the scientific process works: it’s important to demonstrate that your results are robust and that they hold up to scrutiny. If they don’t, that isn’t a failure, but rather a manifestation of what it looks like when we learn more about the world and Universe around us.

The only things that should be in crisis are these: the status quo of how we choose to fund research, and the low emphasis placed on the incredibly valuable task of performing experiments that find null results. Exploring an unexamined corner of the Universe is always scientifically valuable, and it’s time we treated it as such. Performing a high-quality, high-precision experiment is useful in that it always reveals the behavior of nature in an unprecedented way. It has only been our biases that have prevented us from recognizing it. Acquiring new knowledge is always a valuable endeavor. The only crisis is in assuming that we know, ahead of time, how nature is actually going to work.

The creep of pseudoscience into actual science. This should be the dividing line for us all: where we put our feet down and say, “no, you will not pollute actual, legitimate science by conflating it with unscientific nonsense.” Asking “what is true?” is fundamentally different than asking, “could I believe that this might be true?” In science, we’re most concerned with what we can establish as being true, as revealed by empirical evidence obtained by measurement, observation and experiment.

At the same time, charlatans abound, and use science-y sounding language to obscure a fundamentally anti-science agenda. Nevertheless, we’re capable of distinguishing between the two, and it’s vital that we listen to those with the requisite expertise to do so. GMOs do not alter your DNA; 5G radiation does not cause cancer; UFOs are not intelligent aliens; perpetual motion and other “free energy” machines are still impossible; etc. Part of the reason that a scientific consensus can be so valuable is that it helps protect us from fraudulent claims that would fill us with irrational and unnecessary fears. In a world full of uncertainty, science should be our rock to rely on.

The truth of the matter is simple, and runs counter to the doom-and-gloom narrative we’re often told: the problems that plague us, including the ones that we ourselves have created, can all be solved by us. For the only time in the history of Earth, one species quite literally controls the fate of the planet, and it’s through our collective actions that our near-term, and possibly even our long-term fate will be decided. Everything rides on our ability to use what we know — and not to substitute any dubious falsehoods or conspiracies for actual knowledge — when it comes to solving these problems that plague us.

This, in many ways, encapsulates how things have been, are today, and always will be. Will we turn towards the most powerful process for learning about the Universe under the circumstances where knowledge is paramount? Or will we allow ourselves to succumb to our ideological prejudices, replacing actual knowledge with dubious information posing as knowledge, deluding ourselves into a worsening of the human condition? While there will always be those who attempt to mislead others for their own personal gain, most of us are genuinely interested in answering that key question: “what is true?” On this day, as well as all others, I hope you’ll join me in being thankful that we’re choosing to go down the path of precisely answering every aspect of that question in every responsible, scrupulous way that we can.