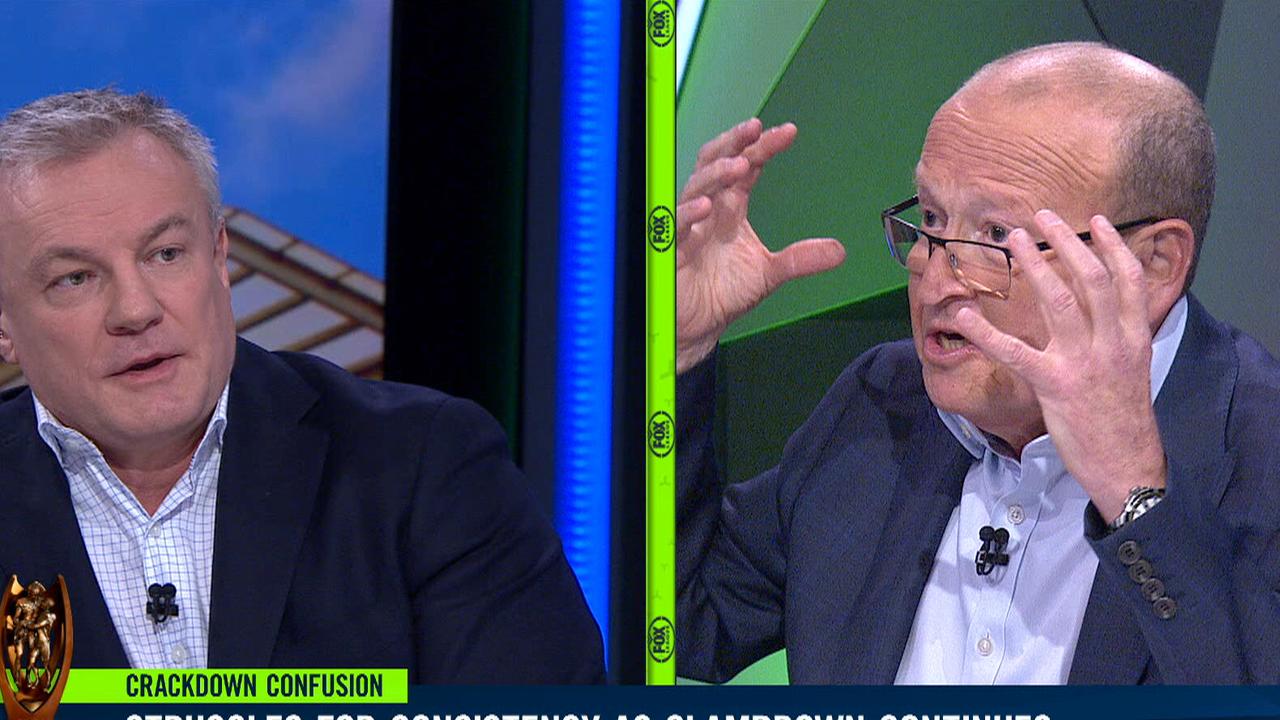 Veteran journalist Phil ‘Buzz’ Rothfield has called for a complete “reset” of how rugby league is refereed during a heated exchange on Fox League’s NRL360 with Daily Telegraph colleague Paul Kent.

Rothfield asked if the game had got its handling of the rollout of the recent NRL crackdown wrong.

As a consequence of the edict regarding contact with the head and neck, the NRL’s Magic Round courted headlines for all the wrong reasons.

There were 31 charges emanating from that weekend with many critics saying ARL commission chairman Peter V’landys should’ve waited until the end of the season to make wholesale changes.

After blanket sanctions, cracks are starting to appear in the NRL’s implementation of its own edict.

In Round 14, Titans back-rower Kevin Proctor was not sanctioned on the field for collaring Roosters star Joey Manu with a blatant headhigh shot.

On the same day in Canberra, Broncos rookie Kobe Hetherington was given a straight send-off after catching a falling Corey Harawira-Naera.

The inconsistent application cause Rothfield to ask Kent: “Will you conceded that Magic Round was an over-reaction?”

Kent replied: “No, you need to be severe. You need to make the game take notice. If you’d said to the players you’re all at level 1 right now and we’ll go to level 10 and give you four, six, eight weeks to get to level 10. You know what would’ve happened by the time the deadline came? They’d be at level 7 because they don’t trust anyone else and they want to look at what every other club is doing and they would’ve sat back at level 7 and said: ‘Dear game, we hope this is enough’. So they said you know what let’s go straight there now it’s your job. And the smart clubs will try and fix themselves. Sam when he went to rugby union was getting in trouble because he was hitting high because they have the above the nipple law and he went away and adjusted his style and it took him two weeks – one of the biggest hitters in the game. If someone like Sam Burgess can do that, don’t tell me these guys can’t either.

IT’S A COLD ONE: Princess Bellyache gets ‘Frozen’ in hilarious Big Freeze effort

OFF THE BOIL: Munster had a quiet night. NSW can expect him to be louder

Rothfield: “The reason I asked the question is I think the issue is a lot broader than high tackles. When you’ve got Boyd Cordner, Wade Graham and Jake Friend out of the game for putting their heads in the wrong places – three experienced campaigners – it says something about the game. It needs a reset and a summit at the end of the year.”

Kent: “I don’t buy that argument.”

Rothfield: “Well they are, there’s a different size.”

Rothfield: “Kenty, if you have two big objects and they run into each other harder and faster than before, it’s a worse collision and a worse concussion.”

Rothfield: “They’re not running at each other Kenty, they’re colliding.

Kent: “They’re punching each other in the face, Buzz.”

Kent: “They’re fighters but because they’re both bigger and I don’t want to get too technical, it’s the physics of it a bigger guy absorbs more impact.”

Rothfield: “You know what Ken Irvine weighed? He was 75kg and then you’ve got Maika Sivo.”

Kent: “But they’re not playing each other!”

Rothfield: “The crashes are like two trucks running into each other instead of push bikes.”

Kent: “The bigger guy can also absorb the impact.”

Rothfield: “Yes, but not in the head.”

Rothfield: I really think it’s a problem. The solution is a summit and a reset at the end of the year with professors, doctors, sport scientists.”

‘WE HAVE TO MAKE TOUGH CALLS’: No deal for Norman… despite coach’s wish

Kent: “The thing nobody wants to talk about is tackle technique where they are upright and they come in chest on and they are getting more head collision and caught. If you’ve seen the early studies you are three and a half times more likely to knock yourself out tackling than to be knocked out and that’s because we’ve allowed this catch, wrestle, hold, business to catch on. So in the old days when you had a lower target zone and you got your head to the side and you got down and you drove, is rarely in the game.”

Rothfield: “You know why I led in on the Magic Round and thinking it was an over-reaction was because everything we’ve spoken about is an off-season operation not during.”

Kent: “But to Peter V’landys point when it comes to safety, if it was stylistic thing about the appearance of the game and the way it looked but it’s a safety thing. When the NRL become aware that there is a problem here, if the NRL say we’ll wait until the end of the year and then deal with it. Every guy who gets knocked out in between here and then in 15, 20, 30 years has some sort of early dementia they can point back to this period in the game and say you knew in Round 10 at Magic Round but you didn’t bring in a rule. I don’t know what sparked it I can’t find that out, why it had to happen but V’landys has said it’s a safety issue, whether he’s been made aware. There are studies coming out and they are being dripped out.”