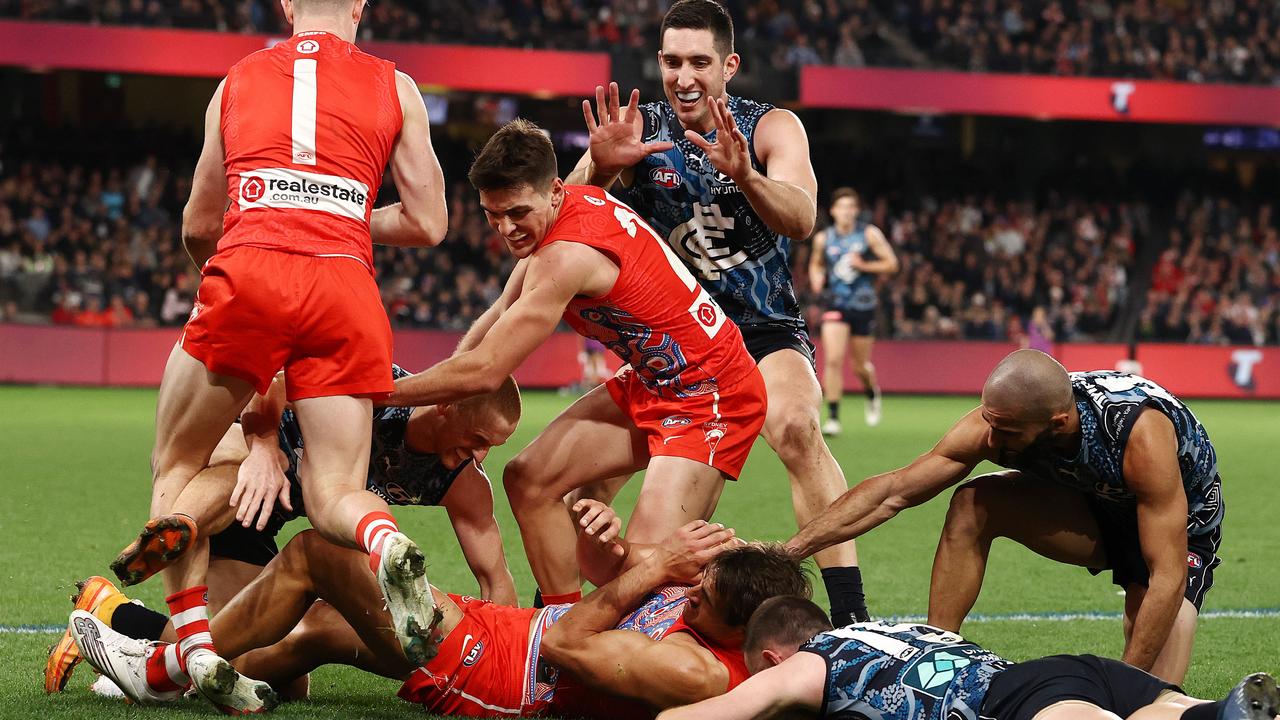 Sydney champion Josh Kennedy’s career is under a cloud after the former Swans captain suffered a serious hamstring injury against Carlton at Marvel Stadium on Friday night.

Kennedy hurt himself while crudely attempting to spoil Blues defender Sam Docherty. In an incident that will almost certainly result in him being cited by the Match Review Officer, Kennedy’s elbow connected with Docherty’s face, forcing the former Carlton skipper from the field with a bloody nose.

Kennedy then had to be helped from the field with the assistance of trainers and struggled to put any weight on his injured right leg.

Swans coach John Longmire confirmed after his team’s 15-point loss that Kennedy suffered a “bad hamstring” injury. And given the 34-year-old is on 289 career games, with just 12 games left in the season, his dream of reaching 300 could be in serious jeopardy.

“Let’s see what happens during the week.”

Triple All-Australian Nick Dal Santo said it was “almost comical” when Blues players were attempting remonstrate with the injured Kennedy after the incident.

Dal Santo said there didn’t appear to be in any “malice” in Kennedy’s act but added he would still likely cop a suspension.

“Josh Kennedy has been a fantastic player and a real hard-nosed, zero-tolerance style of player,” Dal Santo told Fox Footy Live. “I don‘t think he had any malice in that … I don’t think that was a vicious act. I don’t think at any stage there he thought ‘I’m going to take a player out here’. I think that he was a yard behind and maybe that’s a sign that the game is going fast.

“It was a clumsy act I think he‘ll get a whack for it because it was an elbow to the head of an opponent who wasn’t able to protect themselves. But then the kicker is he does his own hamstring in it.”

Kennedy’s numbers this year are well down on his usual output, and he has even been used as a starting sub on a couple of occasions, adding to the uncertainty over his chances of extending his glittering career into 2023.

Triple premiership forward Cameron Mooney said Swans fans would now “wonder where Josh’s career is at”, but added Kennedy’s presence was still needed on the field.

“So it‘s interesting to see what they do with him when he comes back, but that hamstring … he couldn’t even walk off.”

Longmire took solace from the fact that the Swans won three quarters against the Blues, but lamented his team’s second term which saw them cough up a staggering nine goals.

The 2012 premiership coach said his players let themselves down in the first half as they gave away a whopping 20 free kicks.

“It was at world record pace, so that was disappointing,” Longmire said.

“We’ll go back and have a look at it, there were some there that were absolutely there, so we’re not saying the free kick count was wrong, we’re just saying that’s what it was – the numbers.”