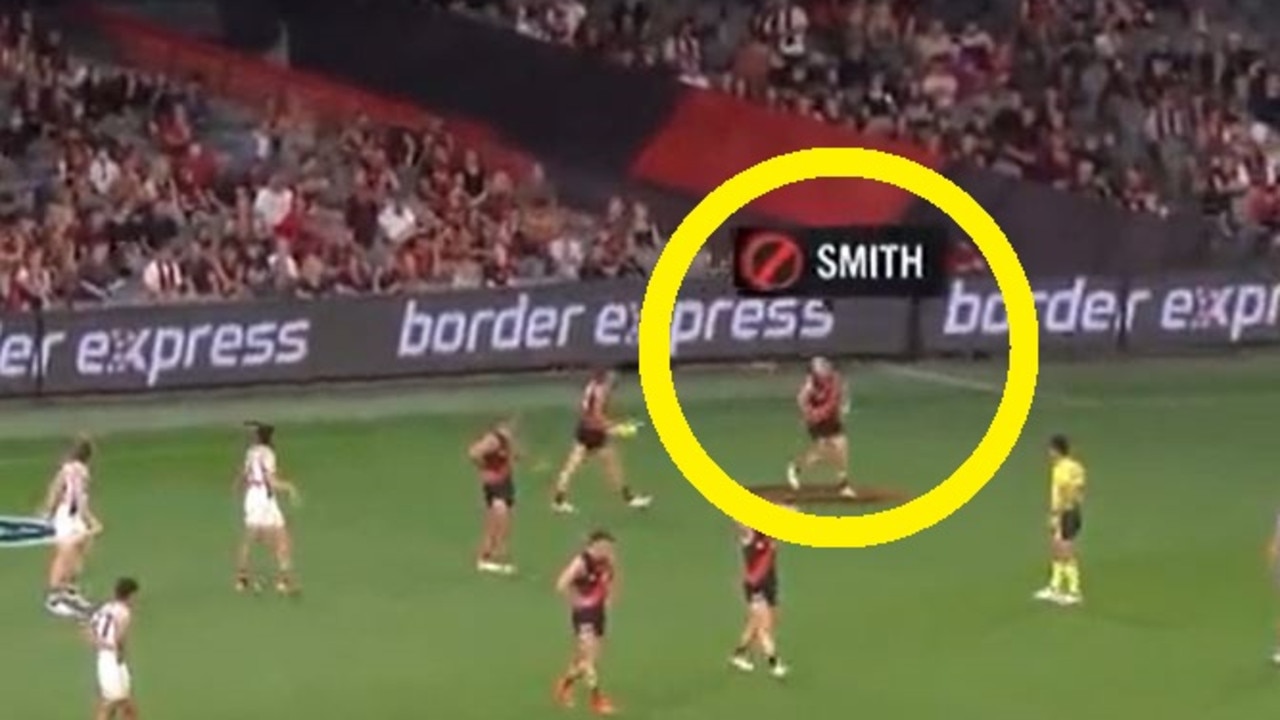 Essendon stars Devon Smith and Dylan Shiel have been slammed for “disgraceful” and “disrespectful” play during their loss to Fremantle last weekend.

The Dockers trounced the Bombers by 48 points on Sunday and with only one win after five rounds, the spotlight has fallen firmly on some of the lacklustre efforts of some of Essendon’s senior players.

Smith has been singled out for a passage of play where he ran past youngster Sam Durham who was lining up for a shot at goal, called for the ball and proceeded to waste the opportunity by snapping through a behind.

“He’s not even in the action but he sees the opportunity to suck the ball out of a young player’s hands to be a goal scorer,” King said.

“That is the mindset of one of your leaders. Where’s that gone from being a defensive player to now just wanting to hit the scoreboard? That’s a huge shift in four seasons.

“I think they’ve (Essendon) absolutely got to start again at ground zero with their attitude and their standards because in isolation to me, embodies everything about the Bombers at the moment.

“A young player who’s played 11 games has the chance to kick a goal. Instead of going behind him and saying, ‘Go back and go through your routine, we need this one’, or ‘Good luck well done’, he wants to rip the ball out of his hands to get it on his stat sheet.

“Is that too hard on one guy?”

“Selfish, self-centred, thinking about himself. Let’s just be honest, that’s what it was.”

King also slammed midfielder Dylan Shiel for a lazy effort in which he was jogging very slowly, completely lost touch with his direct opponent and showed no intent to catch up to the contest and support his teammates.

King said: “I look at Dylan Shiel and I say, ‘Righto what are you doing to pick up the gap?’.

“You’re in this game, this is halfway through the third quarter. Dylan’s just been on the bench for four minutes, he’s been on the ground for 60 seconds. All these other players are flagging physically.

“Have a look at this for an effort. This is what disrespect looks like on a football field. Not to the fans, to his teammates. He now leaves his fellow midfielders on a four-on-seven on the wing. Look at that. That is horrific.

“And I’ll guarantee you they’ll drop one of these backmen this week because this is what Essendon do. They’ll blame (Brandon) Zerk-Thatcher or one of the lesser like names that’s easy to drop.

“They have to fight tooth and nail to break even here outnumbered and they win the ball. If I’m part of the Essendon back six I’m saying well done, bloody proud of you.

“But up the chain, it’s disgraceful play and disrespectful play. You’ve got to hang this on the ace, king and queen of the place.

“And people will say, ‘You can’t go past those players, we gave up first round picks for those guys’. No. You stand for something at your football club and you go past them.”

Essendon, Smith and Shiel will get a chance to redeem themselves when the Bombers face Collingwood on Monday in the traditional Anzac Day clash.