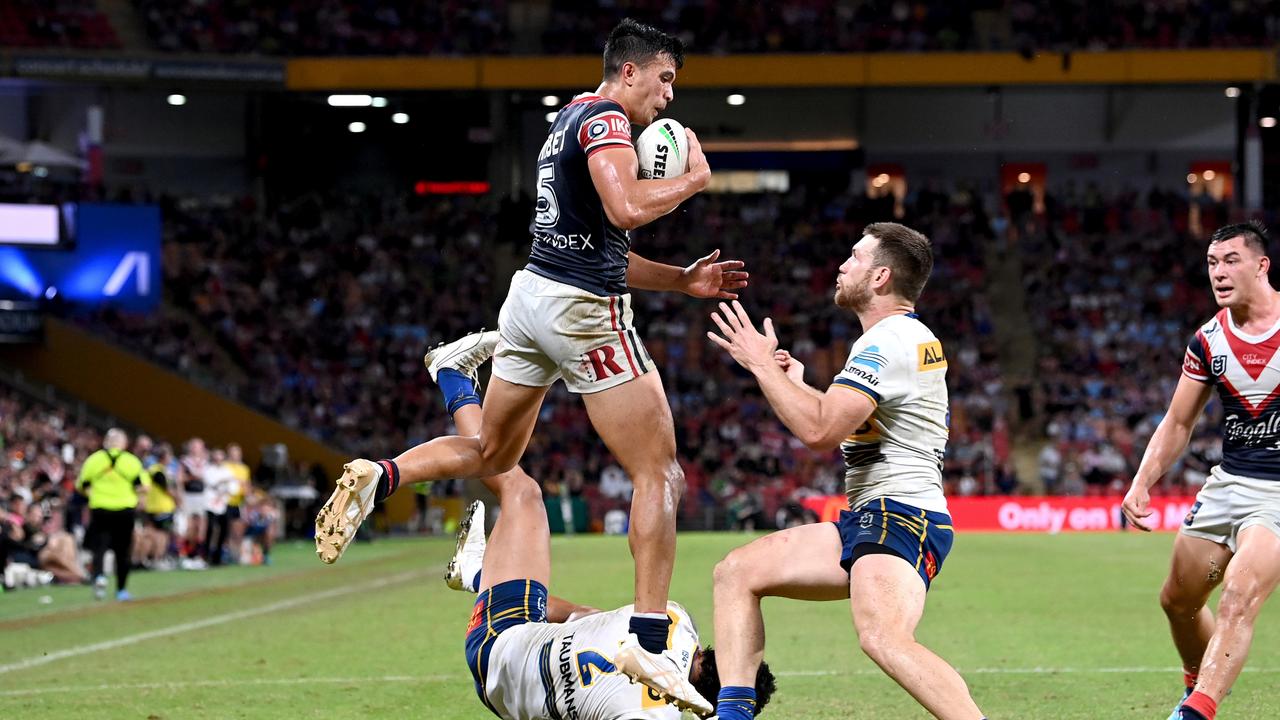 Roosters young gun Joseph Suaalii is starting to live up to his billing as walking highlights package, but it’s the grunt work where the 18-year-old believes he’s making his biggest strides.

Suaalii made the most highly-anticipated debut since Sonny Bill Williams last season but injury restricted him to just five games.

The star winger now has 10 NRL appearances to his name and delivered the best performance of his budding career against the Eels on Sunday night.

Suaalii scored a spectacular try after leaping over the top of Parramatta winger Hayze Perham, and he finished the night with 148 metres and two tries in the 31-24 win.

“I’ve been working on that for a long time now,” Suaalii said of his acrobatic leap.

“I watch Daniel Tupou do that every day at training. I just try to copy what he does, Keary put the kick up, it was a very good kick and I was fortunate to catch it.

“It’s a lot of practice, just repetition every day try watching one of the best catches in the game, Daniel Tupou, just trying to emulate what he does.”

It’s not just the spectacular finishes that Suaalii has been working on, revealing how coach Trent Robinson has developed his game.

“I’ve definitely got things I need to improve on, I wasn’t very happy with my defence and I wanted to work on that,” Suaalii said.

“Game by game I’m growing my confidence… but I need to work on my defensive presence.

“Robbo has kind of opened my eyes to the one percenters of the game, kick pressures and playing off the ball.

“Whereas when I was a junior I’d just run around and play a different type of footy. I’ve grown in the one percenters of the game.

Robinson praised the teenager for rolling up his sleeves and doing the tough yardage work against the Eels.

“The toughness and the class that he showed in that game for an 18-year-old was very special,” Robinson said.

“You’ve got to work on the really hard areas of the game in young guys because they just don’t get it in lower grades.

‘GAVE HIM IN’: Fan ejected for derogatory comments aimed at Tigers star’s family

“The kid hardly even played reserve grade but he’s dreamt about those hard areas a lot and he’s taken them on board.

“He put his hand up tonight like he has since he started but then he also knows he’s got class on the end. I thought that was a great game from him.”

“He just always wants to get better and improve and keep learning, he’s awesome,” Tedesco said.

“It’s hard to believe he’s only 18 because he’s got such a good head on his shoulders and he’s going to get better and better.

“That try was just a glimpse, he does that stuff at training all the time. It’s going to be really exciting to see how he continues to develop and get better.”

Suaalii re-signed with the Roosters last week and will be at the club until the end of 2024.

The schoolboy union star said he never considered switching codes ahead of the Rugby World Cup next year.

“There was no temptation (to go rugby), I love everyone here, the staff and all the players so I’m happy to be here for another year,” he said.

Suaalli is a Penrith junior and will face the Panthers at the SCG on Saturday night.

“It’s always good to go against your home team,” he said.