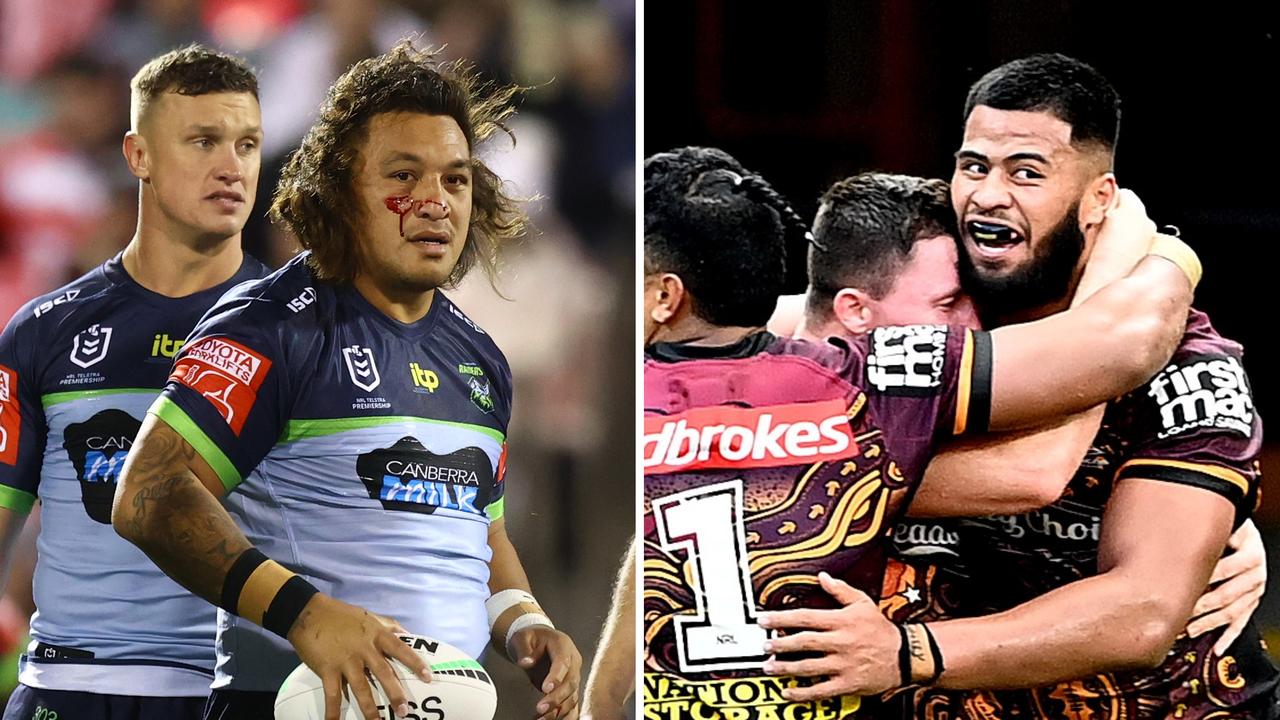 The Broncos are on the other end of the NRL spectrum, with light at the end of the tunnel after what was their best performance of the season to date.

Here’s the biggest talking points from Round 16.

Canberra coach Ricky Stuart has some big decisions to make after his awful season hit a new low on Saturday.

The Raiders were thumped 44-6 by Gold Coast in the nation’s capital.

The coach took aim at some ordinary defence from his troops.

“We were outplayed,” Stuart said.

But the fallout won’t stop there.

Fox League’s chief NRL reporter James Hooper says Stuart and his team are set to run a comb over the entire squad and make wholesale changes before next season.

English halfback George Williams has already left the club, while hooker Josh Hodgson is continually linked to an early exit from his contract.

“In the bigger picture he’s going to have to take a tomahawk to the roster,” Hooper told Big League Wrap.

“At the moment you can see there’s fractures all over the place. That performance last night you could see they were disinterested, they were putrid.

“It looked as though some of the players weren’t having a crack.”

But even he was shocked by the performance on Saturday.

“Against the run of play, there was try from (David) Fifita, but even before that (AJ) Brimson pulled them apart a couple of times on the edges too easily,” Ennis said.

“Once Fifita scored that try I was concerned, but when (the Titans) were able to put on three tries when they only had 12 men on the field… three tries in eight minutes heading into half time was a real shock.”

THE MOMENT THAT SUMS UP NEW BRONCOS

Brisbane put forth its best performance of the season on Sunday by beating Cronulla 26-18 at Suncorp Stadium. It was the long-awaited return of gun centre Kotoni Staggs that ignited the stirring victory, as he busted three tackles and set up a try to dominate the Sharks.

But there was one solitary moment right on the final siren that perhaps best summed up the team’s turnaround.

It was the final play of the game when the Sharks were on the attack, through the defensive line and looking to score.

A grubber kick was being chased by Sharks fullback Will Kennedy but the man on the spot to beat him to the ball and knock it dead was Payne Haas.

The hulking front-rower had run for 197 metres and put in a load of work, but still managed to race back to kill the play in the final minute of the game.

“That is a guy that you can continue to build the club around. You can look at his statistics – he ran the ball for nearly 200 metres, he made 37 tackles – but what that last play resembles was nothing to do with talent.

“That was what Wayne Bennett had built a Broncos jersey on, and that was about never giving up, and it was about effort.

“It was a brilliant play in the 80th minute from Payne Haas.”

The Bondi Wall has fallen.

The Roosters used to be a side built on defensive grit, resolve and perseverance.

Instead they looked lost against the Melbourne Storm as the hallmarks of what made them a great team over the last few years evaporating in Newcastle on Thursday.

What should have been a ding-dong battle between two competition heavyweights descended into a mismatch for the ages which was over by half-time.

The Roosters have lost nine straight games against the NRL’s current top four. Yes, they have had injuries and retirements of key players, but they’re not alone on that front.

Trent Robinson’s side had conceded 30 points by the break for the first time since 2001. One try they conceded saw Dale Finucane carry three defenders over the line to dot down.

“Just that competitive edge, the willingness to get on that ball, you put yourself in a spot no-one else wants to and unfortunately for the Roosters they were looking around,” said Fox League’s James Graham.

“There were two or three players in the picture that should kill that ball.”

Defence wasn’t their only concern, this was the first time since 2016 they had been nilled and the Storm were only too happy to carve them up at will.

Sam Walker, who was given a good going over by Melbourne, and Lachlan Lam, whose kicking game was poor, were unable to bring the devastating Roosters backline into play.

The trick to beating Melbourne is to be unorthodox and go round them, trouble them with late offloads and disrupt their rhythm. Neither did that, and it led to Michael Ennis suggesting Robinson could look to shift Joey Manu into the halves for the rest of the year.

“Manu’s shown he can handle it (playing in the halves) and he loves the big moments,” said Ennis.

“He’s got great confidence and he’ll go looking for the ball.

“The challenge for Lachlan Lam is that there four points outside the top four and it’s moments like these he needs to show Trent Robinson he’s their No. 6 moving forward.

“I think he’s got a month or so to do that moving forward, if not there’s a possibility for Joey Manu to go into that position.”

Corey Norman is playing for his rugby league future but he might want to delete the video of Friday’s game against the Warriors.

Norman eventually kicked the winning field goal in the 88th minute, but prior to that he had a night to forget.

Never mind he couldn’t slot a conversion off the tee, the Dragons five-eighth struggled in attack and was poor in defence.

He was slammed by Fox League commentator Andrew Voss for “under 10s stuff” when he was defending at market, and allowed Warriors hooker Wayde Egan to fall over the tryline.

He was nowhere to be seen when the Red V needed a miracle, trailing 18-6 with only minutes to play.

It was Norman’s halves partner, Ben Hunt, who did almost everything for the listless Dragons as they somehow ran down the Warriors at the death.

He’s being paid $800,000 by St George Illawarra this year but options look thin for the one-time Origin playmaker.

Paul Kent told NRL 360 recently Norman’s manager is struggling to get interest in his player for even half of that salary.

If he stays in the team, Norman still has a few games left to convince someone he’s worth a contract.

Cleary is set to miss at least another three weeks with a shoulder injury but is no guarantee to last the season even if he does return.

The Panthers’ main man is sure to be targeted in defence and the risk is that he could re-aggravate the injury, leaving Penrith in the same spot they are now.

Tyrone May is yet to offer enough in attack with a limited passing and kicking game putting pressure on Jarome Luai to shoulder the bulk of the playmaking responsibility.

Matt Burton, meanwhile, has been restricted to the centres where his long-range kicking is being wasted.

May has played with Luai in the juniors and Ivan Cleary said playing him in the halves caused the least disruption in a rushed week but Cronk is not convinced.

“Tyrone May is solid and safe,” he said post-game on Fox League.

“The whole idea is let’s take a step forward as a group, put Burton and Luai together. Who knows what they could do? They could spark something, give the Panthers a little bit more excitement and energy and when the gun comes back they are in a better place than where they left.”

Burton played a key role in his last game partnering Luai, kicking for almost 600 metres in a 12-10 win over the Storm.

A knee injury to Luai may force Cleary’s hand but if it is not serious enough to keep him sidelined past Origin III the same debate remains.

The Fox League team was in agreement that Burton has to make the switch to five-eighth while Cleary is sidelined.

“If Cleary comes back and he is not fit and re-injures the shoulder, Burton is the half, without doubt,” Braith Anasta said.

Lara Pitt, meanwhile, asked: “Isn’t this the opportunity then to give Burton and Luai as much opportunity to get it right if for some reason the worst-possible thing happens when Cleary comes back?”

Cronk agreed that Penrith would be taking a big risk settling for May in the halves.

“I think you can be a little flat if you keep waiting for your gun player to come back,” he said.

“The other 16 players need to improve, they need to bring their own game.”

If ever there was a team in this year’s competition that couldn’t afford to have five players put into isolation due to a Covid breach it was the Bulldogs.

Canterbury were always going to be up against it playing arguably the form team in the competition in Manly, but take five certain starters in the 17 at least out and they were no hope.

Dylan Napa, Brandon Wakeham, Aaron Schoupp, Corey Waddell and Sione Katoa’s behaviour resulted in a record 66-0 loss to the Sea Eagles that undid all the good work that the club had done in the last month.

Coach Trent Barrett admitted he was furious at the five stood down players and refused to guarantee that he would pick them next week.

“Yep,” Barrett said when asked if he was angry.

“They have let the club down. It is not nice to do that.

“I would have loved to have been able to bring (debutants) Bailey Biondi-Odo, Chris Patolo and Falakiko Manu into a full strength team where we are a big chance of winning the game.

“That’s not one that they are going to want to remember. The whole club wasn’t happy about it.”

The heavy loss also did nothing for the confidence of returning half Kyle Flanagan who was on a hiding to nothing playing for a team that had virtually no ball in good field position.

The Bulldogs will struggle to field a team next week after four players were placed on report and their 28-6 upset win over the Dragons in Round 14 all of a sudden looks a long time ago.

Newcastle may have found its final piece to the premiership puzzle as the Knights make a late-season run at the top eight.

They flogged North Queensland 38-0 on Saturday and it was the first time their ideal spine had the chance to run out together, ever.

Jake Clifford only joined the club a month ago, leaving the Cowboys mid-season.

Alongside Jayden Brailey at hooker, it’s the spine the Knights hope to take into season 2022 fresh.

“I think Jake Clifford could be that final piece that Newcastle need to really kickstart their run at the back end of the season,” Ennis said.

“We’ve seen Mann at five-eighth who has been up and down, they brought in Blake Green, Connor Watson has spent time at five-eighth.

“I like the stability. If they can keep Brailey, Pearce, Clifford, and Ponga on the field then they are a chance of doing some damage in the competition and really testing some of the top sides.”