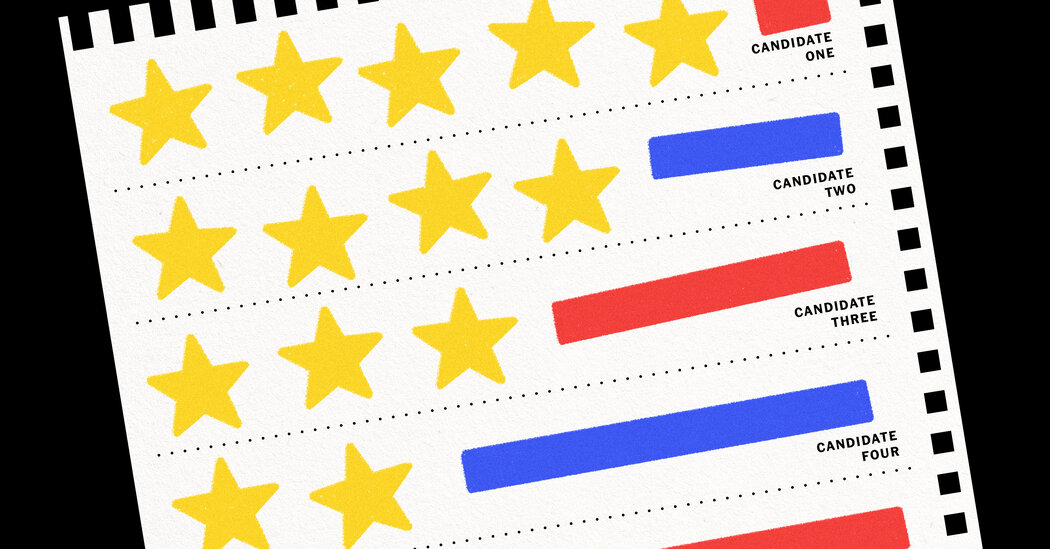 Last month this board endorsed Kathryn Garcia for mayor of New York City and urged voters to cast a ballot for her in the June 22 Democratic primary. (Early voting begins June 12.)

Normally, that would be the end of it. But this year’s ballot looks different, for mayor and for other citywide races. Instead of having only one choice in each race, New York City voters have the opportunity to rank up to five candidates, in order of preference.

Ranked-choice voting, as it’s known, has been in use for decades around the world and has been gaining popularity around the United States recently. That’s for good reason: It allows voters to vote for candidates they genuinely like best, it forces candidates to appeal to more voters than they might in a traditional election, and it results in a winner who is acceptable to a majority of the electorate.

The whole point of representative democracy is — or should be — to elect leaders who are chosen by a broad cross-section of voters and who are responsive to all of them. This matters all the more today, when distortions like partisan gerrymandering have warped the relationship between voters and their representatives.

New York City, which adopted ranked-choice voting by referendum in 2019, is so far the largest jurisdiction in the country to give it a try. This year’s Democratic primary is just what the system was designed for. A large and diverse slate of candidates, none of whom seem likely to pull away from the pack and win an outright majority in the first count, is an ideal scenario for ranked-choice voting to play out.

Still, many New Yorkers remain confused or apprehensive about the new system. Here’s how it works in practice, and here are the two key things to keep in mind when you go to fill out your ballot.

First, vote with your heart, at least for your top choice. Don’t try to game the system or do mental gymnastics about your rankings. The great thing about ranked-choice voting, in contrast to the traditional first-past-the-post method, is that you have the freedom to vote for the candidate you like best and still have a say in the outcome if that candidate doesn’t win.

Second, it’s best if you fill in your ballot completely, which means ranking five candidates, not one or two or three. You’re not required to do this, but if you do, the system works better. If you don’t and the candidate or candidates you rank are eliminated, your ballot stops counting. Filling in all five rankings eliminates this problem of “exhausted ballots,” and it guarantees your voice will count in the choosing of the next mayor — even if that person wasn’t your first (or second or third) choice.

It’s also a good idea to include at least one of the front-runners on your ballot, even if you put him or her at the very bottom. That way you are more likely to have a say all the way to the end.

What does this mean for the 2021 mayoral race and how you should fill out your ballot?

If you agree with us that Ms. Garcia should get the job, rank her first. If you prefer another candidate, rank that person first. After that, rank the other candidates you like — or whom you could at least live with being mayor — in order of your preference.

Whichever candidates you choose, be patient. There is a good chance New Yorkers won’t know on election night who their next mayor will be. It could take a few weeks to get a final result, in fact.

Not only can ranked-choice ballots take longer to tabulate, but New York, after decades of operating in the electoral Dark Ages, has also finally adopted several modern voting reforms, including early voting and no-excuse absentee voting. Absentee ballots are allowed to arrive up to a week after the election, and voters have seven business days to fix any problems that might invalidate their ballots. Because so many people are expected to vote absentee this year, those ballots may be decisive in one or more races.

The city plans to release first-choice totals from early votes and Election Day votes on election night. One week later, it will release a ranked-choice tally of those ballots plus any absentee ballots that have arrived and been processed, which could result in a different candidate taking the lead.

As soon as all absentee ballots are in and errors are fixed, the city needs to promptly release all results. A bill under consideration in Albany would provide public access to the raw digital data of ballots within a week after an election, allowing anyone to run that data through a ranked-choice software program and get a result. (The bill has passed the Senate and is waiting for a vote in the assembly.)

The bottom line: Don’t overthink things. Vote for your favored candidates, in the order you prefer them. Fill in your whole ballot.

This year’s mayoral election is perhaps the most consequential in a generation, so it’s fitting that voters will have an opportunity to decide that election in a new and more democratic way. By adopting ranked-choice voting, New Yorkers gave themselves more of a voice in choosing their leaders. It’s time to use it.