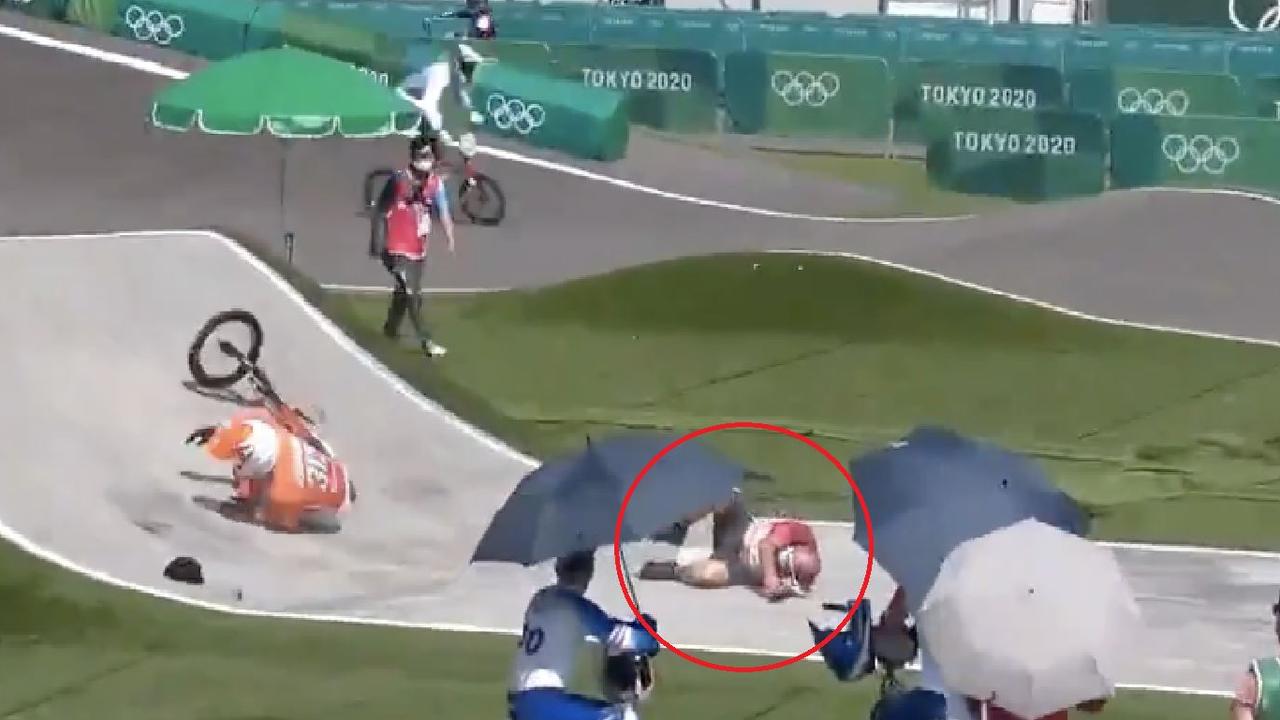 The first two days of swimming finals have delivered golden wins for the Australian team; will day three be just as good?

Plus two surf stars will make their pushes for historic medals thanks to a tropical storm.

Get all of the news from our Aussies on day four at the Tokyo Olympics!

Owen Wright has made a strong start in his quarter finals of the men’s surfing.

Wright has just scored the two waves so far but has a solid lead in his bid to qualify for the semi finals.

The sport’s first Olympic finals were brought forward 24 hours to Tuesday because of the tropical storm heading towards Tokyo.

It has pushed storm swell with it, generating big waves.

“After a review of the surf conditions forecast for Tuesday and Wednesday, tournament officials have decided to move the women’s and men’s Olympic surfing finals from Wednesday to Tuesday,” said a Games statement.

“The International Surfing Association technical director assessed the overall impact of the surf forecast on the final day of competition and adjusted the schedule.”

Aussie swimmer David Morgan was left crushed after a disappointing last-placed finish at the Tokyo Olympics.

He was at a loss to explain the result given just a month earlier he had swum nearly five seconds quicker at the Australian trials.

“I just died – I‘m bitterly disappointed with that,” Morgan said, per News Corp.

“You don’t come to an Olympic Games and swim that slowly. I’ve got to figure out why that went so bad.

“I‘m not really too sure, I’ll have to look at it again. I’ll bounce back – you get knocked down, you get back up again.”

Kath Loughnan and Nick Riewoldt speak to Ariarne Titmus’ dad, Steve, after the new queen of the pool delivered one of Australia’s finest ever Olympics performances. Also, Michael Klim joins the podcast.

﻿‘WHAT THE HELL’: BMX CHAMP FUMES AFTER UGLY CRASH

Niek Kimmann was on a practice run of the course when an official walked out onto the back straight and was collected by the 2019 European champion in an ugly collision.

Those in attendance could be heard yelling “watch out” while Kimmann yelled “what the hell” after taking the official out.

Kimmann is one of the favourites for the gold medal, competing against Aussie Anthony Dean but injured his knee in the incident.

Alongside a video of the crash which he posted on his Twitter account, Kimmann wrote: “I hit an official trying to cross the lane.

“Hope the official is OK. My knee hurts, but I‘ll do my best to be ready by Thursday! Thanks everyone for the messages, I appreciate it!”

The competition gets underway on Thursday.

MCKEON INSPIRED BY ‘TERMINATOR’ AS AUSSIES GO FOR GOLD AGAIN

Olympic bronze medallist Emma McKeon will use the “incredible” swim of her team mate Ariarne Titmus to fire up her own dreams of winning a seventh medal at the Tokyo Olympics.

On Monday, McKeon won a bronze medal in one of the toughest events on the Tokyo Olympic program, the 100m butterfly, as reigning world champion Canadian student Maggie Macneil – who had come into the meet as an underdog, was able to sneak past the entire field.

McKeon just concentrated on keeping her head down in the final butterfly strokes and the 27 year old touched out US swimmer Torri Huske for the bronze medal by a mere one-hundredth of a second.

It was McKeon’s personal best for the event. She said: “I’m pretty happy – I couldn’t ask for more, it was the best time I ever swam. I was just focused on my process and skills and how I wanted to swim it.”

She is now two down, five to go in her stunning quest for a record seven medal haul at these Games.

On Sunday night McKeon blitzed her relay leg as part of the record breaking 4x100m freestyle team. On Monday when McKeon had received her butterfly bronze medal and heading for media interviews, she was able to sneak a peek at Titmus’s epic showdown with Katie Ledecky in the 400m freestyle.

McKeon tries to keep her emotions in check – even striding to the blocks for her own races head down and without a wave to the crowd, but she was thrilled for Titmus’s win.

“It was incredible, I saw the last 200m after my race and to watch her come home like that, it gave me goosebumps.

“I couldn’t be more happy for her.”

STILL THE KING? ‘Mind-blowing’ Chalmers sends message to US megastar

RESULTS: Full results for every event and how the Aussies fared

But the big waves are likely to have disappeared by Wednesday – when the medal events were due to be held.

Organisers announced on Monday that the quarter-finals, semi-finals and medal events of the men’s and women’s competitions would all now be held on Tuesday.

Australia’s Owen Wright (9:48am) and Sally Fitzgibbons (12:12pm) are our two quarter-finalists.

The International Surfing Association’s technical director had “assessed the overall impact of the surf forecast on the final day of competition and adjusted the schedule accordingly,” organisers said in a statement.

The competition was originally scheduled to be held over four days, with an extra four days in reserve in case weather conditions made them necessary.

Surfers have found the waves at the Games bigger than they were expecting. “As soon as you say Tokyo 2020 in August, everyone says you’re going to surf knee-high waves,” American surfer Kolohe Andino said on Monday.

“And of course, the very first few days it’s waves that are … head-high waves. It’s funny, that’s how surfing is. You’ve got to be prepared for everything.” Olympic organisers opted to hold the event at Tsurigasaki Beach instead of using an artificial wave pool.

The fan-free Tokyo Games are undeniably a weird experience for athletes to confront, but it could prove to be the secret weapon that powers the Matildas into the Olympic quarter-finals.

The Matildas believe they are well placed to lock up a top-two finish in Group G, refusing to be overawed by the world No.1 USA team that is blocking their path.

The USA bounced back from their shock 3-0 defeat to Sweden last week by demolishing New Zealand 6-1 on Saturday night, but Australia are enthusiastic about their prospects against a star-studded lineup.

And they believe the eerie empty stands – where stadiums that typically seat up to 50,000 screaming fans are filled instead with a near-silent scattering of media, support staff and Tokyo 2020 officials – will work in their favour.

“The fans obviously give that energy that every team longs for. Definitely the US play off the fans so that’s a big advantage for us,” Emily Gielnik said in the wake of Australia’s tough 4-2 defeat to Sweden.

“They’re pretty used to big crowds and we aren’t as used to it as they are, so we’re trying to keep it as an advantage for us.”

While the US boasts some of the biggest names in the sport, led by midfield veteran Megan Rapinoe, Gielnik believes they’re ripe for the picking at Ibaraki Kashima Stadium on Tuesday night.

“Watching Sweden, the way they played against the US and how the US struggled – I’m not disrespecting them at all, obviously they’re No.1 for a reason – but any team on any given day is beatable,” Gielnik said.

“There’s no doubt even if they won against Sweden we’d still go into that game with no doubt we could beat them.

“For us it is an advantage that they don’t have a big crowd behind them because I know that’s where they get a lot of their energy from. But they’re a good team, you can’t write them off.”

Harvick and Elliott feud as Larson wins in Bristol

Cuba vaccinates children as young as 2 in strategy to reopen schools, economy