Khushi Kapoor’s New York Pics Are Making Someone Else “Sad” 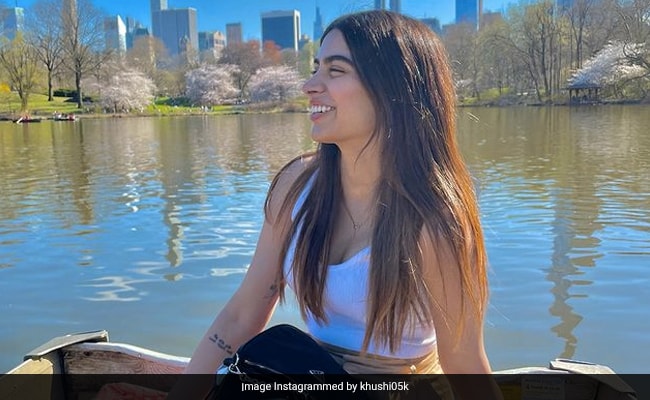 Khushi Kapoor just lightened up our Instagram feeds with her latest pictures from New York. Filmmaker Boney Kapoor and late actress Sridevi’s younger daughter, who is currently pursuing her education in New York dropped three new pictures of herself on Instagram on Thursday. In the pictures, Khushi can be seen in a jovial mood and wrote: “Happy,” in its caption. Khushi’s sister and actress Janhvi Kapoor, on the other hand, wrote something completely opposite in the comments section of the post. “Sad,” Janhvi commented, to which Khushi replied, “it’s ok me too.” The post also received a comment from actress Sushmita Sen’s daughter Renee Sen who dropped a heart emoji in the comments section of the post.

While the first two pictures feature Khushi sitting in a boat in the middle of a lake, the other one captures her posing near a beautiful tree. Keeping it stylish, Khushi can be seen dressed in a white tank-top and peach culottes. She completed her look with a checkered overcoat.

Khushi Kapoor’s sister Janhvi recently enjoyed a vacation with her in New York. The sisters had quite a blast during the holiday. How we know that? Courtesy Janhvi’s Instagram posts. The 24-year-old actress shared multiple pictures and videos of herself with Khushi on Instagram last week. The post features stunning views of the city skyline, mirror selfies and dinner time pictures of the sisters.

After wrapping up her holiday in New York, Janhvi is now enjoying a vacation in Maldives. Earlier today, she shared multiple stunning pictures of herself from the trip on Instagram and wrote: “Last to get on the Maldives bandwagon but I fully get the hype.”

Getting back to Khushi Kapoor, in a recent interview with Bombay Times, filmmaker Boney Kapoor had shared that after Janhvi Kapoor, Khushi too has plans to join Bollywood. He did not give more information about Khushi’s Bollywood debut but confirmed that he won’t be the one to launch her.

Born to Be Lazy? What Bears Can Teach Us About Our Exercise Habits