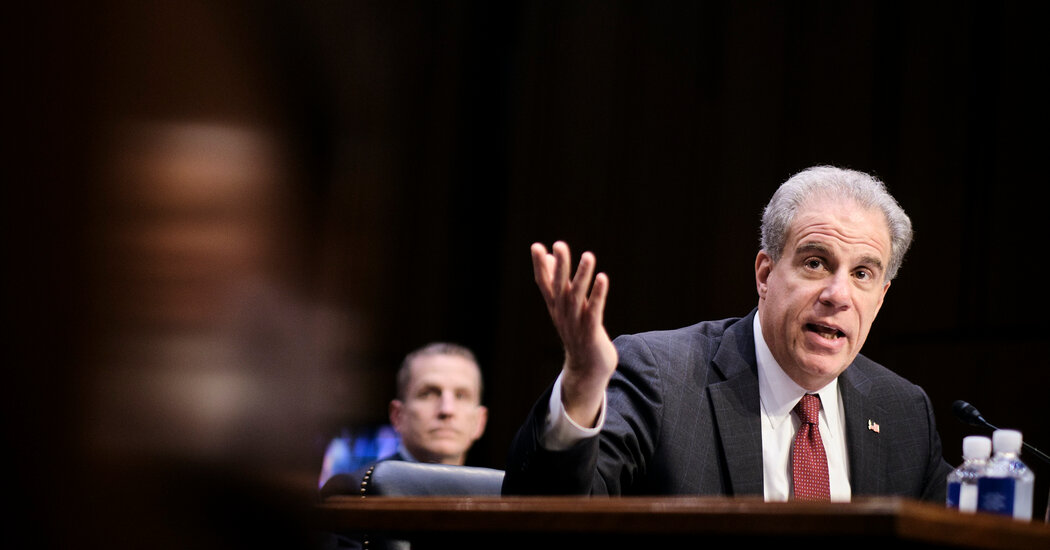 (Want to get this newsletter in your inbox? Here’s the sign-up.)

1. The Justice Department’s watchdog opened an investigation into the Trump administration’s secret seizure of data from House Democrats and reporters.

The inspector general, Michael Horowitz, above in 2019, said he would review the department’s use of subpoenas and other legal measures to secretly access communications records of Democratic lawmakers and aides. Senate Democrats also announced their own investigation into the matter.

The Times first reported yesterday that the Trump Justice Department subpoenaed Apple and one other service provider to hand over data tied to at least a dozen people as it hunted for the source of leaks about Trump associates and Russia. The department then secured a gag order to keep it secret. Apple said it unknowingly turned over the data, calling the release the routine work of a paralegal.

Horowitz said he would also look at other recently disclosed actions intended to secretly seize data from reporters.

2. The F.D.A. decided that about 60 million doses of the Johnson & Johnson vaccine made at a Baltimore plant must be discarded because of possible contamination.

The F.D.A. plans to allow about 10 million doses to be distributed in the U.S. or sent to other countries, but with a warning that regulators cannot guarantee that the plant followed good manufacturing practices. The Johnson & Johnson doses administered so far in the U.S. were manufactured in the Netherlands.

The loss of 60 million Johnson & Johnson doses puts a dent in the Biden administration’s plan to distribute vaccines to other countries that are still in the grip of the pandemic. The leaders of the Group of 7 will pledge one billion Covid vaccine doses to poor and middle-income countries on Friday.

3. The question from employers in a quandary over vaccines: What’s your status?

Most companies are hoping to avoid requiring Covid vaccines. While it’s technically legal, chief executives fear vaccine mandates may lead to lawsuits, invite political upheaval and be hard to enforce. But they’re worried about safety, and are trying everything short of a mandate, without yet ruling one out. Here’s how to reopen offices safely.

For much of the pandemic, rush hour vanished. But as the economy reopens, and traffic returns, what if that headache didn’t reappear? A modest number of people working from home, say, on a Thursday, might make it less painful.

4. Call it the end of Zoom diplomacy.

After over a year of remote meetings, the Group of 7 leaders met face-to-face as they opened a summit in England dominated by the coronavirus pandemic. While the G7 countries — the U.S., Canada, Japan, Britain, France, Germany and Italy — increasingly have Covid under control within their own borders, the pandemic remains an urgent threat globally.

Despite the feel-good imagery on display at the meeting, many Europeans suspect that President Biden is little more interested in give-and-take than was his predecessor. Covid restrictions kept protesters at bay, but a floating blimp that caricatures Biden and Prime Minister Boris Johnson of Britain did manage to float by.

The bipartisan bills — five in total — take direct aim at Amazon, Apple, Facebook and Google and their grip on online commerce, information and entertainment. The proposals would restrain their power and stave off corporate consolidation across the economy, and would also empower regulators with more funds to police companies.

Also out of Washington: Attorney General Merrick Garland laid out a detailed plan for protecting voting rights, including doubling staff and scrutinizing new laws, and saying it would act if it identified a violation of federal law.

6. New maps produced by The Times show the most severe drought conditions in the American West in at least 20 years. And the hottest months of summer are still to come.

The outlook for the 2021 fire season is “as bad as it can be,” one expert said. The situation is especially dire in the Southwest and California, where a drier-than-usual winter and warm spring temperatures have made for a dangerous situation. The state is unlikely to get significant rainfall again until October.

7. Pulitzer Prizes were given to news organizations that provided in-depth coverage of the dramatic turns of 2020.

The prize for public service, considered the most prestigious of the journalism awards, went to The Times for its coverage of the coronavirus pandemic, including the front page memorializing the first 100,000 deaths from Covid, above. Wesley Morris also won for his “unrelentingly relevant and deeply engaged criticism” for The Times.

The staff of The Star Tribune in Minneapolis won in the breaking news category for their coverage of the murder of George Floyd. And the Pulitzer board awarded a special citation to Darnella Frazier, the teenager who filmed the killing.

BuzzFeed News won its first, for reporting on China’s internment of Uyghurs in Xinjiang. Louise Erdrich won for her novel “The Night Watchman.” Here is the full list of winners (and a guide to the winning books).

9. After more than a year of desultory streaming, “In the Heights” is “a dream come true,” our film critic says.

Adapted from Lin-Manuel Miranda and Quiara Alegría Hudes’s Tony-winning Broadway show, “In the Heights” is a musical homage to Latino culture, an intergenerational story about family, community and upward mobility. “It’s a piece of mainstream American entertainment in the best sense,” A.O. Scott writes, “a testimony to the power of art to turn struggles into the stuff of dreams.”

Told through the lens of Washington Heights in Upper Manhattan, the musical was shot on location, a risky choice that offered “a million authenticity checks every day,” Miranda said in a discussion with Hudes and the film’s director, Jon Chu. They explain what it took to create a euphoric spectacle that stayed true to its roots.

Hung over from a party and anxious from the pandemic, Dan O’Conor was ordered out of the house by his wife one day last June to blow off some steam. O’Conor hopped on his bike and rode three miles to Lake Michigan, where he promptly jumped in. “It felt so good,” he said. “I just wanted to block it all out, the pandemic, everything.”

O’Conor has been doing it every day since. The daily jump slowly became his way to escape, even if it meant using a shovel to break through an ice-covered lake. On Saturday, O’Conor is planning a grand finale for his 365th jump. He doesn’t know how many people will show up, but he’s expecting a few will take the plunge with him.

‘Haven’t been where he’s been’: Coach urges experts to keep a lid on teen star

‘I struggle to contain my frustration’: Suns lashed for loss to Port – and there was ‘no excuse’

Miss Manners: Our co-worker refuses to be near men. Do we...

‘Haven’t been where he’s been’: Coach urges experts to keep a...