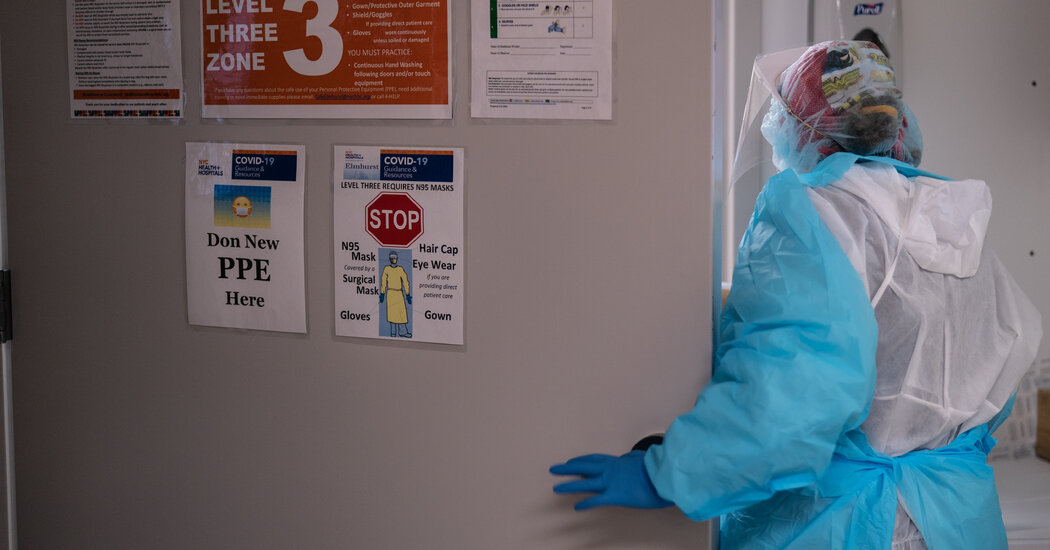 Mayor Bill de Blasio announced on Wednesday that some city employees who aren’t vaccinated will soon be required to get a weekly coronavirus test.

Though far short of mandating vaccinations, the new policy was still notable: It was City Hall’s first effort to pressure a group of city workers to get vaccinated by inconveniencing those who did not.

But it left some public health experts wondering why City Hall’s policy was so limited, especially when the spread of the Delta variant has led to a rise in cases. The policy only applies to the more than 40,000 employees of the city’s public hospital system and some workers at the Department of Health who work mainly in health care settings.

But Mr. de Blasio has been hesitant to require the same of the other 300,000 workers on the city’s payroll — police officers, firefighters, correctional officers, clerical workers, janitors and more.

Also, Mr. de Blasio said there are no plans to reinstitute a mask mandate. For now, the policy announced on Wednesday will be the extent of the city’s response to the more than 600 new virus cases per day in the last week.

Some experts think it is not enough

With the city’s vaccination rate hardly budging, and the Delta variant threatening a third wave of cases, some epidemiologists expressed concern that the city was moving too slowly.

Dr. Wafaa El-Sadr, a professor of epidemiology at Columbia University, wondered why the city did not extend this policy to all city employees.

“I think the time is right,” she said.

About 60 percent of the public hospital system’s work force is vaccinated, a rate that is lower than the citywide full vaccination rate for adult New Yorkers (65 percent). Some other municipal agencies have similar rates.

Dr. El-Sadr said that the city should consider a stricter policy for teachers, requiring them to get vaccinated if they did not have a medical or religious exemption and were going to be assigned to classrooms with children who were too young to be vaccinated.

Another epidemiologist, Dr. Kitaw Demissie, said that at this stage of the vaccination campaign — seven months in and with flagging recent results, even as the variants grow more contagious — it was appropriate to start requiring negative coronavirus tests from municipal workers who had yet to get vaccinated.

“It’s a very simple thing to ask,” said Dr. Demissie, who is dean of the School of Public Health at SUNY Downstate Medical Center in Brooklyn. “This is a way to put pressure on people — or you can call it encouragement — to get vaccinated.”

The program could be expanded

A number of unions representing municipal workers have expressed opposition to mandatory vaccinations. But they have not come out against City Hall’s new policy, which is more of a testing mandate than a vaccination mandate.

The mayor said he wanted to start small with the city’s health care workers — a pilot program, of sorts — before considering expanding the policy to other city agencies.

“We had to get started in the most important place,” Mr. de Blasio said Wednesday. “That’s our health care workers, and we have to build out a model.”

“We are definitely looking at other possibilities,” he added, “but we’re not there yet.”

What other cities are doing

San Francisco announced last month that it will eventually require all 35,000 of its city employees to be vaccinated.

As N.Y.C. begins its post-pandemic life, we explore Covid’s long-lasting impact on the city.

Chicago has set some travel restrictions and warned that additional rules could be coming. Unvaccinated residents there are urged to get tested after traveling to Florida, Louisiana and a handful of other states with higher cases.

In New Jersey, Gov. Philip D. Murphy said he hoped his state would not have to return to an indoor mask mandate and other restrictions. But he said this week: “If we have to, we will.”

Mr. de Blasio has been reluctant to require masks indoors again in New York City, though they are required in some places like on public transit.

“If you’re talking about fighting Covid and the Delta variant and winning this battle once and for all, a mask is like a peashooter and the vaccine is like a cannon,” the mayor said on Wednesday. “The vaccine is what actually wins.”

Eric Adams, the Democratic nominee for mayor, said on Wednesday that he did not want the city to return to requiring all New Yorkers to wear masks again.

“I’m hoping that we don’t,” Mr. Adams said in a television interview, adding that residents should “be smart” and do their part to end the pandemic.

Employee coronavirus testing policies at health care facilities in New York have been spotty, so the new policy will at least help improve on that.

Part of the reason for the lack of testing is that testing capacity was so limited early on, and results could take a while. But it is also because during the initial surge last March and April, hospitals were facing an overwhelming surge of patients and needed staff at work.

“In the early months of the pandemic, hospitals wanted nurses on the job,” the New York State Nurses Association, the state’s largest nurses union, said in a statement. “They were not informing employees of exposures and were not testing many who knew they had been exposed — even those with symptoms.”

(People with Covid-19 can also test positive for weeks after they are sick.)

At the city’s public hospitals, there hasn’t been a routine testing program of employees until now, with the mayor’s order.

‘We do see a small third wave coming’

Just two months ago, New York’s epidemic seemed largely over: case counts were dropping to levels not seen in a year and the vaccination rate was ticking up. Mr. de Blasio promised this would be “the summer of New York City” and many people nodded in agreement.

But the Delta variant represents a new threat. With the new policy, the city appeared to realize that some kind of action was necessary.

The good news is that about 54 percent of all New Yorkers — and a large majority of the most vulnerable — are fully vaccinated.

“We do see a small third wave coming,” said Dr. Ronald Scott Braithwaite, a professor at N.Y.U. Grossman School of Medicine who has been leading a team that has been modeling New York City’s epidemic for city officials. His modeling team predicts a total of about 900 deaths in a coming third wave.

During the first wave last spring, when ambulance sirens blared across the city, more than 20,000 New York City residents died of Covid-19. The death toll from the long second wave was less than half that.

Dr. Braithwaite said that his modeling team predicted the third wave might peak in October, with some 400,000 to 500,000 New Yorkers infected.

More than 3.4 million New Yorkers have yet to receive a first dose of a coronavirus vaccine. That includes about 1.4 million children, many of whom are ineligible for vaccination.

No changes to school plan — for now

Mr. de Blasio insists that schools will fully reopen in September as planned and that the city will not offer a remote option.

“I think it would be a horrible shame if another year in the lives of our children was lost, and I think it would cause a lot of other problems and pain for our kids,” Mr. de Blasio said in an interview on CNN on Wednesday.

The mayor is urging parents to vaccinate students 12 years and older, but younger children cannot yet get vaccinated. The city plans to require students to wear masks at school and will have other safety rules in place.

“We said for months and months, kids will be wearing masks in the new school year,” Mr. de Blasio said this week. “It’s indoors. It’s a lot of people together.”