Home Breaking ‘I’m your man’: Johnson just put himself in the shop window. This... 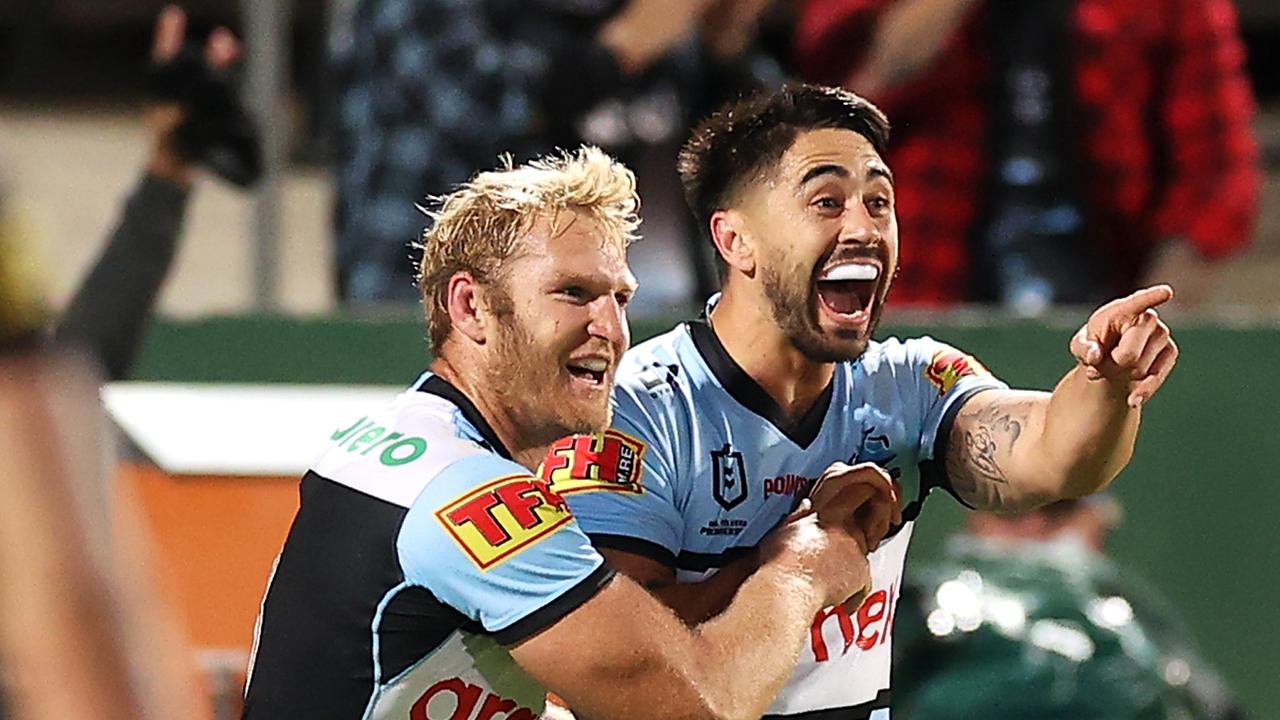 As far as auditions for a new gig go, Shaun Johnson put himself in the shop window after delivering the matchwinning play on Friday night.

With the game on the line against the Panthers, Johnson came up clutch for the Sharks – the club that bizarrely doesn’t want him for 2022 – to seal the two points.

Penrith came storming home after the Sharks raced out to a 18-0 lead.

With the game tied up 18-18, Johnson led his side down the other end of the field and nudged over the scrappiest of field goals.

It was that kind of composure that will no doubt have rival clubs pondering whether to take a punt on Johnson.

It’s a good time to be an off-contract halfback of Johnson’s standing. His class and experience – totalling 201 NRL games and 32 Test caps – is clear to see.

And after proving the difference on Friday, Johnson was quick to make his feelings known.

“I got the news a couple weeks back and it obviously wasn’t the news I wanted to hear,” he told WWOS.

“I had hopes of seeing my career out at this club. They gave me an opportunity three years ago. I have certainly enjoyed my time here. So, it’s not meant to be; they want to head in a different direction, I really do respect that.

“But for me all I can focus on is coming out here, getting some games under my belt, and trusting that next year will take care of itself. Tonight hopefully helps and if there are any clubs out there that are after a halfback, I’m your man. Come on.”

Johnson comes onto the open market when a number of rival clubs are hunting for a halfback or five-eighth.

Canberra is the most obvious destination for Johnson given they just released homesick English playmaker George Williams.

The Raiders have the money to spend, but they aren’t alone in being flush with cash.

The Gold Coast, Canterbury, and Brisbane could all be options for the New Zealand international.

“You would think he is in the top 16 halfbacks in the completion and you reckon he’d be able to find a club, whether six or seven,” said Fox League’s Gorden Tallis.

‘SAD TO WATCH’: Huge concern for Sharks skipper after another scary head knock

BOOST: How brutal Sharks cull could work in their favour as contract reality sets in

“I see the Dogs are struggling, the Raiders have lost their No. 7, the Titans – I don’t know what’s happening with Ash Taylor next year.

“The Broncos? He’s got put his ego in his pocket. Why don’t we throw the Tigers in there? He’d have played under Madge with the Kiwis.

“I think he kicked really well and his kicks were pinpoint and he iced the game. That’s what you want, you go down the other end and he hits the field goal.”

The difference for Johnson between now and when he left the Warriors is that he isn’t going to be commanding the best part of $1 million.

But Fox League’s Greg Alexander suggested struggling clubs would be willing to fork out the big bucks in order to get their hands on a player of Johnson’s quality.

“Those clubs that we’ve mentioned I think they pay more than half of that to get Shaun Johnson.

“The Dogs have already got Matt Burton going there.

“What do they do with Kyle Flanagan? He has signed a three-year deal and they’d have to move him if they were going to get another half there.”

AGs push Uber Eats to add a price disclaimer to the...