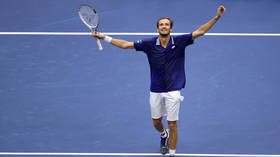 Russian tennis world number one Daniil Medvedev booked his place in a second consecutive ATP tour final by seeing off local favorite Oscar Otte at the Halle Open on Saturday.

After coming within a point of losing the first set, Medvedev rallied back to take it 7-6 (3) and then left no doubt by clinching the second set 6-3 and knocking out his German foe in the semi-finals.

The meeting was a first on the ATP tour between the two men, and Medvedev came out on top against world number 51 Otte to reach his second final in six days after falling at the last hurdle at the Libema Open in ‘s-Hertogenbosch.

Medvedev’s current run in Halle is already a huge improvement on his showing there in 2021 where he lost in the first round to debutant Jan-Lennard Struff.

“I didn’t play well in Halle last year, so I’m happy that this year I managed to raise my level,” the Moscow native admitted post-victory.

“As I’ve always said, I love playing on grass, so I’m happy to show to myself that I’m capable of being in the final of one of the greatest tournaments, especially on grass, and of course I’m looking forward to tomorrow,” he added.

Medvedev is now 14-2 on grass since the Struff defeat but unfortunately can’t take his good form to the grass court season’s showpiece event, Wimbledon, after facing Hubert Hurkacz in Sunday’s final.

This is due to the All England Lawn Tennis Club’s (AELTC) ban on Russian players at the British grand slam, which was made as a response to Russia’s military operation in Ukraine.


But with the ATP stripping the tournament of ranking points in protest at the ban, Medvedev still looks set to keep his world number one spot and has been boosted by news that he’ll also be able to defend his US Open crown after the United States Tennis Association (USTA) decided not to follow the AELTC’s lead.

Reacting to the “great news”, Medvedev reiterated a vow to follow the rules and “play where I can play”.

“I just want to show my best tennis. I’m happy to be able to defend my title. I have some amazing memories from last year,” Medvedev went on, when talking about what is “one of the most special tournaments for me”.