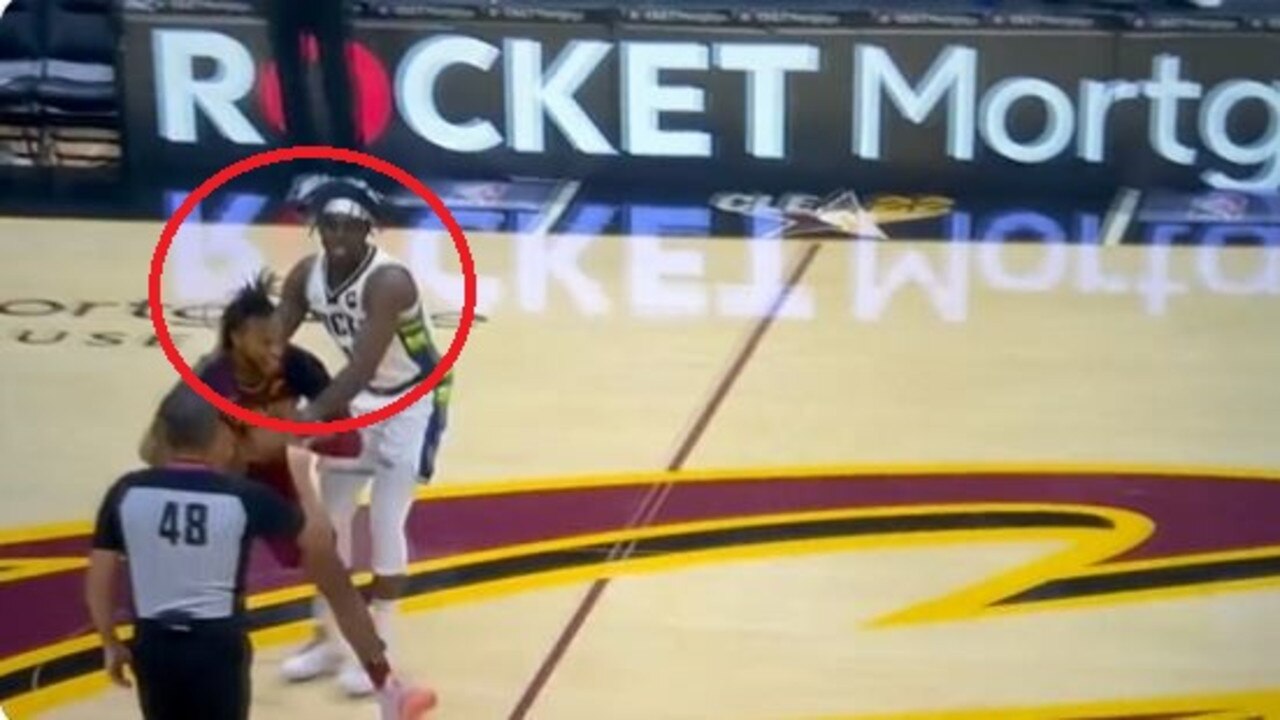 The Boston Celtics are in the box seat to lock up second seed in the Eastern Conference after the Milwaukee Bucks fell to the Cleveland Cavaliers 133-115.

Watch the 21/22 NBA Season with ESPN on Kayo. Live coverage every week plus every game of the NBA Finals. New to Kayo? Try 14-Days Free Now >

It was later revealed that in briefly appearing in Monday’s game, Holiday triggered a $255,000 ($A342,000) bonus in his contract for making 67 appearances this season.

As was expected, the undermanned Bucks were a shadow of their usual selves, giving up 46 points in the opening quarter as the Cavaliers locked up eighth seed in the East.

Filling the void for Milwaukee, Sandro Mamukelashvili led the way with 28 points and 13 rebounds — with both figures being career-high numbers.

For Cleveland though, it was Kevin Love who made an instant impact, putting up 32 points and 10 rebounds in just 14 minutes, shooting 8-for-11 from downtown.

With it, Love became the first NBA player in the shot clock era to record 30-plus points and 10-plus rebounds in under 16 minutes.

Cleveland will now play the Brooklyn Nets in the play-in tournament for the seventh seed.

Speaking of the Nets, they rode a strong showing from Kevin Durant, Kyrie Irving and Andre Drummond to take a 134-126 win over the Indiana Pacers.

The Nets came out firing in the first quarter, jumping out to a 41-29 lead after dominating in the paint (30 points), with Irving nailing a buzzing-beating jumper to finish with 10 points.

Brooklyn struggled to push any further ahead but at the same time the Pacers did not look like getting close enough to threaten the result.

Drummond made his impact felt on both ends (20 points and 13 rebounds) while Kyrie Irving topped the scoring with 35 points.

Durant though was the standout with his second triple-double in three games (20 points, 10 rebounds, career-high 16 assists).

It was Durant’s fourth triple-double of the season, a single-season career higher for the Nets superstar.

For the Pacers, attention now turns to the off-season and what moves they may make in their rebuild, although Tyrese Haliburton continues to impress in his new team.

Haliburton, who was traded from the Sacramento Kings, finished with 17 points, four rebounds and 10 assists in the loss.

The other two play-in spots in the Eastern Conference were also confirmed on Monday morning, with the Atlanta Hawks and Charlotte Hornets finishing ninth and tenth respectively.

The Hawks, meanwhile, had all five starters finish in double digits for points, including Trae Young (28 points, five rebounds, 11 assists) in a 130-114 win over the Houston Rockets.

The Rockets came close though finished the season on a high with rookie Jalen Green exploding for 41 points, shooting 14 of 26 from the floor.

Green enters the off-season having scored 30-plus points in six of his last seven games and will have another top-5 draft pick alongside him next year.

In later games that will have a bearing on the playoff picture, the Philadelphia 76ers can lock up the third seed and a first-round meeting with the Chicago Bulls.

That will only happen if they beat the Detroit Pistons and the Boston Celtics lose to the Memphis Grizzlies.

Otherwise, should Philadelphia lose, the 76ers will meet the Toronto Raptors in the first week of the finals.

As for the Celtics, since the Bucks lost, they can climb as high as second seed with a win over the Grizzlies.

Moving to the Western Conference, the Dallas Mavericks and Golden State Warriors will be fighting it out for third seed.

The Mavericks play the San Antonio Spurs and will need to not just win but also have the Warriors lose to finish with the No.3 seed.

The Warriors, meanwhile, battle the New Orleans Pelicans later in the day.

The Denver Nuggets and the Utah Jazz are also in a tight tussle for fifth seed in the West, with the latter in the box seat.

The Nuggets must beat the Los Angeles Lakers to be any hope of leapfrogging the Jazz.

Should Utah defeat the Portland Trail Blazers on Monday, it will lock up No.5 seed.