From Maldives: Can You Decode The Word Janhvi Kapoor And Her Squad Tried To Spell In This Pic? 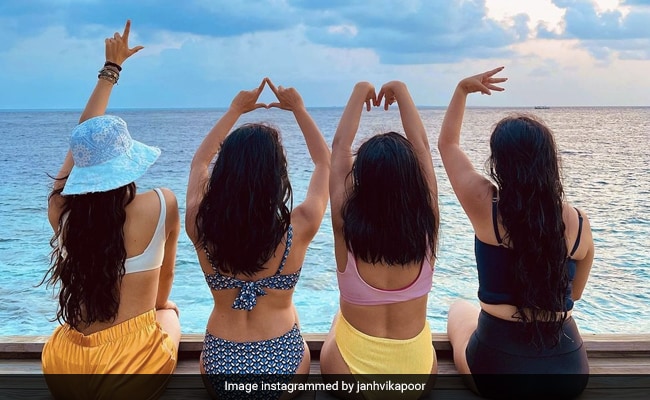 Janhvi Kapoor, who was slightly late to go on a holiday in Maldives with her friends, is making up for the lost time with one post at a time. Her latest one is all about sun, sea and her squad. In the pictures, Janhvi Kapoor and her friends can be seen enjoying the Maldives view as they sit together, dressed in colourful swimsuits. The second shot features the actress and her friends trying to spell out “LAME” with their hands (just in case it wasn’t clear). Sharing the perfect shots on Instagram, Janhvi Kapoor wrote: “We were trying to spell LAME in case you guys didn’t get it.”

On Thursday evening, the actress shared stunning pictures from her holiday, dressed in a swimsuit. She can be seen smiling at the camera in one of the pictures and she captioned the post: “Iridescence.” Check out the post here:

The star checked into the island nation by sharing this post and she wrote: “Last to get on the Maldives bandwagon but I fully get the hype.”

Janhvi Kapoor was last seen in the horror comedy Roohi, with Rajkummar Rao and Varun Sharma. The actress, who made her Bollywood debut with the 2018 filmDhadak, opposite Ishaan Khatter, has featured in films like Netflix’s Ghost Stories and Gunjan Saxena: Thr Kargil Girl. Her line-up of film includes comedy Dostana 2, co-starring Kartik Aaryan. She will also be seen in Good Luck Jerry. Janhvi Kapoor is late actress Sridevi and film producer Boney Kapoor’s daughter. Her sister Khushi, studying at the New York Film Academy, aspires to be an actress.

More wealthy investors are going to cash, but millionaire bears are still in the minority

How To Fix The Proposed GILTI Changes

Bernie Sanders: We need to fix America. And the wealthy should help pay for it

Chauvin was found guilty of murder yesterday. He’ll be sentenced in 8 weeks.