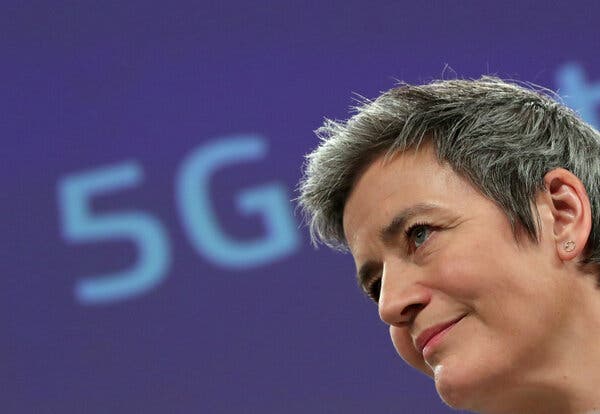 The European Union on Wednesday unveiled strict regulations to govern the use of artificial intelligence, a first-of-its-kind policy that outlines how companies and governments can use a technology seen as one of the most significant, but ethically fraught, scientific breakthroughs in recent memory.

Presented at a news briefing in Brussels, the draft rules would set limits around the use of artificial intelligence in a range of activities, from self-driving cars to hiring decisions, school enrollment selections and the scoring of exams. It would also cover the use of artificial intelligence by law enforcement and court systems — areas considered “high risk” because they could threaten people’s safety or fundamental rights.

Some uses would be banned altogether, including live facial recognition in public spaces, though there would be some exemptions for national security and other purposes.

The rules have far-reaching implications for major technology companies including Amazon, Google, Facebook and Microsoft that have poured resources into developing artificial intelligence, but also scores of other companies that use the technology in health care, insurance and finance. Governments have used versions of the technology in criminal justice and allocating public services.

Companies that violate the new regulations, which are expected to take several years to debate and implement, could face fines of up to 6 percent of global sales.

Artificial intelligence — where machines are trained to learn how to perform jobs on their own by studying huge volumes of data — is seen by technologists, business leaders and government officials as one of the world’s most transformative technologies.

But as the systems become more sophisticated it can be harder to determine why the technology is making a decision, a problem that could get worse as computers become more powerful. Researchers have raised ethical questions about its use, suggesting that it could perpetuate existing biases in society, invade privacy, or result in more jobs being automated.

“On artificial intelligence, trust is a must, not a nice to have,” Margrethe Vestager, the European Commission executive vice president who oversees digital policy for the 27-nation bloc, said in a statement. “With these landmark rules, the E.U. is spearheading the development of new global norms to make sure A.I. can be trusted.”

In introducing the draft rules, the European Union is attempting to further establish itself as the world’s most aggressive watchdog of the technology industry. The bloc has already enacted the world’s most far-reaching data-privacy regulations, and is also debating additional antitrust and content-moderation laws.

The past year has crushed independent restaurants across the country and brought a reality to their doors: Many were unprepared for a digital world.

Unlike other small retailers, restaurateurs could keep the tech low, with basic websites and maybe Instagram accounts with tantalizing, well-lit photos of their food. It meant businesses like BentoBox, which aims to help restaurants build more robust websites with e-commerce abilities, were a hard sell, Amy Haimerl reports for The New York Times.

For many, BentoBox’s services were a “nice to have,” not a necessity, the company’s founder, Krystle Mobayeni, said.

But the pandemic sent chefs and owners flocking to the firm as they suddenly needed to add to-go ordering, delivery scheduling, gift card sales and more to their websites. Before the pandemic the company, based in New York City, had about 4,800 clients, including the high-profile Manhattan restaurant Gramercy Tavern; today it has more than 7,000 restaurants on board and recently received a $28.8 million investment led by Goldman Sachs.

The moment opened a well of opportunity for other companies like it. Dozens of firms have either started or scaled up sharply as they found their services in urgent demand. Meanwhile, investors and venture capitalists have been sourcing deals in the “restaurant tech” sector — particularly seeking companies that bring the big chains’ advantages to independent restaurants.

A growing number of retirees and those approaching retirement are in debt.

The share of households headed by someone 55 or older with debt — from credit cards, mortgages, medical bills and student loans — increased to 68.4 percent in 2019, from 53.8 percent in 1992, according to the Employee Benefit Research Institute. A survey at the end of 2020 by Clever, an online real estate service, found that on average, retirees had doubled their nonmortgage debt in 2020 — to $19,200.

Susan B. Garland reports for The New York Times on what to do if you’re in this position: