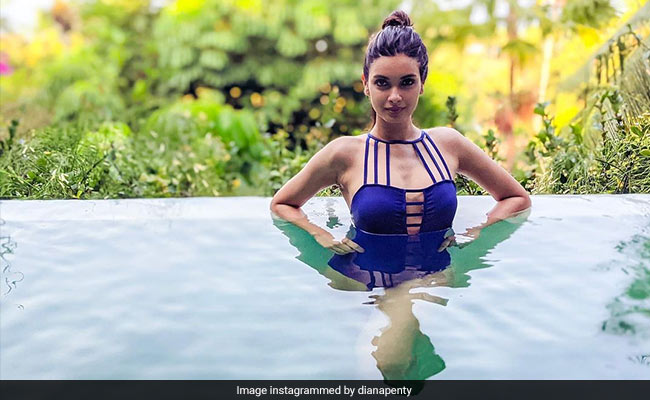 Don’t get fooled by Diana Penty‘s latest post amid the coronavirus restrictions. The actress uploaded a throwback picture where she is seen relaxing in a swimming pool. The Cocktail star began her caption as, “And this is how I’m taking on curfews, lockdowns and this mad, mad heat…” But then, she instantly added, “too bad this is a throwback. Stay safe, everyone.” The 35-year-old looks gorgeous in a deep blue cut-out swimsuit and a top bun. Athiya Shetty and Sonali Bendre were absolutely in love with the snap. Fans too were mesmerized by Diana’s beauty if you go through the comments box.

Diana is creating a splash on the social media feed with her fashionable outings. The recent one was for a magazine where she experimented with a variety of styles. Diana is captured wearing an ice blue body-hugging strapless dress in one of the images. In another one, it was all about a pink frilly mini, paired with leather boots. The actress also tried ethnic wear like lehenga and kaftan salwar.

Diana is gearing up for her debut Malayalam movie Salute. She will share the screen space with Dulquer Salmaan. The action-thriller is being directed by Rosshan Andrrews. Dulquer will portray the character of sub-inspector Aravind Karunakaran in the film. The teaser was released earlier this week.

Apart from this South venture, the model-turned-actress has bagged Kunal Deshmukh’s romantic drama Shiddat: Journey Beyond Love. The cast includes Radhika Madan, Sunny Kaushal, Mohit Raina and Sikander Kher. The movie was slated to release in September 2020 but has now been indefinitely delayed due to the pandemic.

Opinion | Why Trump Is Still Their Guy