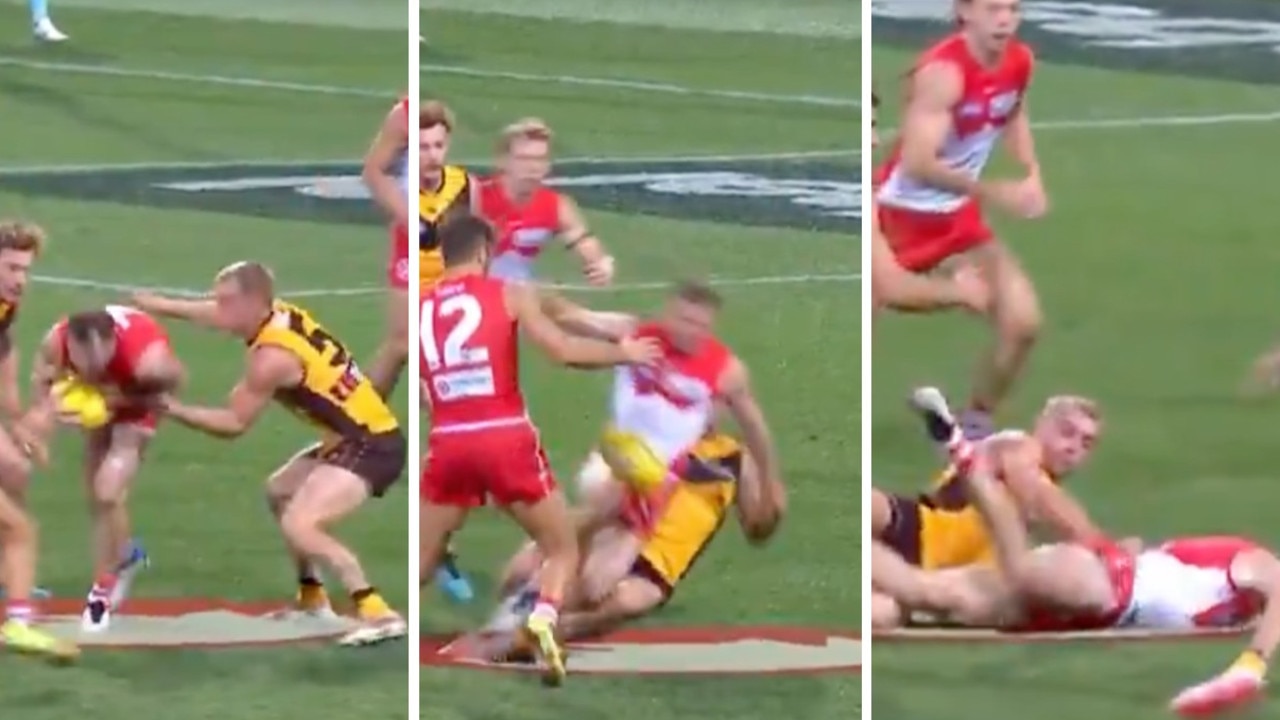 Hawthorn midfielder James Worpel is set to come under scrutiny by the Match Review Officer for a dangerous tackle on Swan Harry Cunningham in Thursday’s night’s upset win for the visitors at the SCG.

Worpel had Cunningham’s arm pinned before driving the defender into the ground, causing his head to hit the turf hard. Cunningham played out the match, but the incident is still likely to be looked at.

“It ticks all the boxes the MRO are looking for. One pinned arm, significant force, he whips Cunningham into the ground and because of that pinned arm he’s not able to defend himself and he takes a significant amount of time to get up,” Ralph said.

“That is enough for medium impact, the action and force make it really easy for Michael Christian. I think it’s definitely a week.”

Brisbane Lions legend Jonathon Brown questioned if Worpel had any other options.

“Worpel is already falling backwards, I’m not sure what else he can do. The only other option he had was to let him go,” he said.

To which Saints great Nick Riewoldt responded: “I don‘t think it’s two actions. I think they’ve got a case, Hawthorn.”

The tackle was further dissected on Fox Footy’s First Crack, with triple-premiership winning Cat Cameron Mooney describing it as an “unfortunate incident”.

While Mooney believes it “probably” warrants a one-match ban, he also questioned what else Worpel could have done in the situation, suggesting there was no malice in the action.

“Technically it probably is a week because we don’t want to see the head slammed, but I do ask the question: What is he to do here?” He posed.

“If he doesn’t grab him and Cunningham just runs away, we say that’s horrible by Worpel and there’s no defensive pressure whatsoever. He grabs him by the arm and he’s actually falling backwards as he grabs him and as he’s falling he brings him down with him.

“If he lets go of his arm, Cunningham gets a handball away. He’s not going out there to deliberately slam his head with the tackle, he’s just trying to stop him from handballing it. This is just an unfortunate incident but unfortunately we don‘t allow this in our game anymore, this is the problem.”

Three-time All-Australian Nick Dal Santo agreed that Worpel will receive a one-week suspension, adding: “I think when the AFL put it through their matrix, the case of what else was he meant to do doesn’t hold up.

“We’ve seen it in so many cases. We see it every week with a deliberate out of bounds, what else was he meant to do. It doesn’t matter … as much as we don’t agree with it, as much as there’s a part of us that still believes accidents happen in the game, it doesn’t in the eyes of the people that are making these decisions … they do not care.

“That’s a week. I hope it never gets to that point, but if it does it’s the responsibility of the tackler not to injure the player that’s being tackled.”

Hawthorn plays Essendon next Sunday at 3.20pm EST, currently scheduled at the MCG.