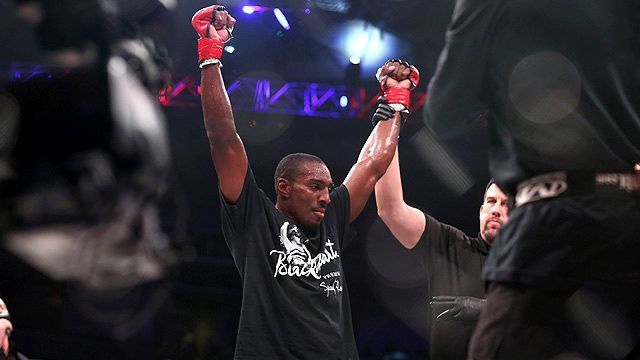 Yoel Romero shook his head and wagged his finger like Dikembe Mutombo. Bellator in-cage announcer Michael C. Williams was reading the results of the Bellator 266 main event and one of the judges had Romero winning the bout.

Romero did not agree with the judge, pointing to his opponent, Phil Davis, and giving him a fist bump. Ultimately, Romero was correct, if not the victor.

Davis defeated Romero by split decision (30-27, 28-29, 30-26) on Saturday night at Bellator 266 in San Jose, California, throwing a bit of cold water on Romero’s anticipated Bellator debut. Davis edged Romero out on the feet and then used his wrestling to seal things in the third and final round.

“He’s a monster,” Davis said. “I felt that power more times than I wished I had tonight.”

The fight was not as close as the split decision might have indicated, but the first two rounds were indeed close. The first was mostly inactive, but Davis landed slightly more clean strikes. In the second, Romero landed some hard combinations and a calf kick that buckled Davis briefly. But late in the round, Davis might have stolen things with a one-two combination that briefly put Romero off balance, followed by a body kick.

Davis, a former NCAA Division I wrestling national champion at Penn State, went to his bread and butter in the third round, which was a gamble, considering Romero is a former Olympic wrestling silver medalist. But Davis took down Romero four times in the round, completely stifling any chance Romero had for a rally.

Afterward, Davis talked about personal issues in his postfight interview, saying he found out in 2020 that both of his parents were diagnosed with cancer.

“I love you guys, and I cannot do this without you,” Davis said.

Romero (13-5) had not fought since falling to Israel Adesanya in a UFC middleweight title fight at UFC 248 in March 2020. Romero left the UFC in December 2020 and signed with Bellator. The Cuba native, who fights out of Florida, was supposed to be in the Bellator light heavyweight tournament but had to withdraw because he was unable to pass his medicals earlier this year. Romero, 44, has one win in his past six fights, but has fought elite competition.