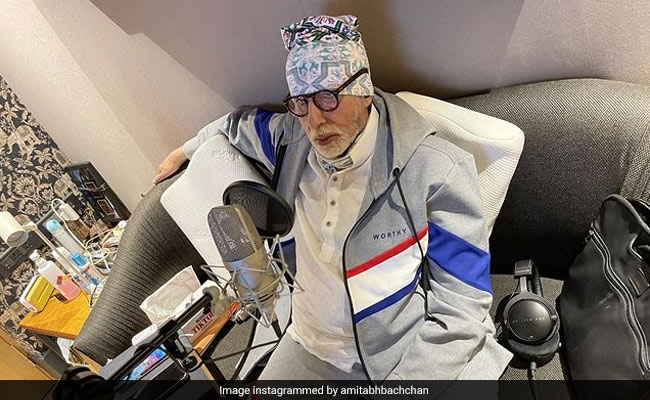 Amitabh Bachchan, in a late night blog post, revealed that his office – Janak – has been flooded after Cyclone Tauktae brushed past Mumbai on Monday. In his post, Mr Bachchan also added that some of his staff members were affected the by the impact of the cyclone: “There is an eerie silence in the midst of the cyclone… the pounding and the lashing rains all day… trees fell, leakages all over, flooding in the vulnerable Janak Office… impromptu plastic cover sheets still in prep for the heavy monsoon rain, ripped apart… sheds and shelters for some staff blown away,” read an excerpt from Amitabh Bachchan’s blog.

Mr Bachchan revealed that he helped his staff members, who got drenched in their attempts to manage his flooded office, with clothes from his personal wardrobe – particularly jerseys of Chelsea and Jaipur Pink Panthers. Just like his son Abhishek, Mr Bachchan too is a true blue fan of football club Chelsea – which explains what he wrote in his blog. Abhishek is also the owner of Pro Kabbadi League team Jaipur Pink Panthers.

“But the spirit of fight impregnable… all hands on deck, stepping out, repairing, preventing helping in extenuating circumstances drenched but on it. Staff simply amazing in such conditions… their uniforms wet and dripping but they continue… gave them dress changes urgently in this strife, from my own wardrobe and now they proudly move about as Chelsea and Jaipur Pink Panther supporters! In their team shirts and tees, some afloat in them and some squeezing their shape into them,” read Mr Bachchan’s blog post.

Cyclone Tauktae made landfall in Gujarat at around 8.30 pm on Monday, packing winds with speeds of 155-165 kilometres per hour, gusting to 190 km/hour. The cyclone brushed past Maharashtra, triggering strong winds with the highest-ever speed of 114 kilometres per hour in Mumbai. Flight operations at Mumbai’s Chhatrapati Shivaji Maharaj International Airport was suspended from morning till 10 pm on Monday because of Cyclone Tauktae.

Aamir Khar: I was disappointed when Lagaan didn’t win the Oscar, but cinema is subjective – Times of India