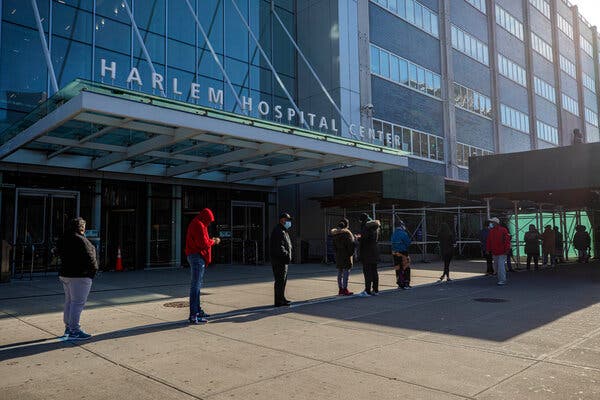 New York City health officials estimate that nearly a quarter of adult New Yorkers were infected with the coronavirus during the catastrophic wave of last spring, and that the toll was even higher among Black and Hispanic residents.

The estimates, based on antibody test results for more than 45,000 city residents last year, suggest that Black and Hispanic New Yorkers were twice as likely as white New Yorkers to have had antibodies to the coronavirus — evidence of prior infection.

Antibody surveys of segments of the population have become a useful way to gauge what percentage of people were infected and what groups were most at risk, especially since there was limited testing for the virus during the first wave.

The new paper, which has been accepted by the Journal of Infectious Diseases, has substantial limitations: Of the 45,000 New Yorkers in the study, fewer than 3,500 were Black, a major underrepresentation. And the participants were recruited partly through advertisements online, which the study’s authors acknowledge may have attracted people who believed they had been exposed to Covid-19.

But the study adds to experts’ understanding of the disproportionate toll that the pandemic has taken on Black and Latino people.

Its findings also come amid a push to vaccinate more people in the United States. A recent survey conducted by the Kaiser Family Foundation found that the number of Americans, particularly Black adults, who want to get vaccinated has continued to increase. According to an analysis last month by The New York Times, Black people were still being inoculated at half the rate of white people. The disparities are especially alarming as Black and Latino people and Native Americans have been dying at twice the rate of white people.

In New York City, about 44 percent of white adults have received at least one dose of a Covid-19 vaccine, while 26 percent of Black adults and 31 percent of Latino adults have, according to city data.

Experts and community leaders across the country say that over all, the lower vaccination rates are linked to technological and linguistic barriers and disparities in access to vaccination sites. Other factors include social media misinformation and a hesitancy to be vaccinated. Hesitancy among African-Americans, experts say, can be tied to a longstanding mistrust of medical institutions that have long mistreated Black people.

The recent data from New York “show how frontline workers bore the brunt of the first wave of the pandemic,” said Dr. Wafaa El-Sadr, a professor of epidemiology and medicine at Columbia Mailman School of Public Health, who was not involved in the study. She noted that many jobs with higher levels of exposure — like grocery store employees, child-care providers and transit workers — have comparatively fewer white workers.

“These were the people who did not have the luxury of being able to work virtually,” she said.

Dr. Kitaw Demissie, who is dean of the School of Public Health at SUNY Downstate Medical Center in Brooklyn and was not involved in the study, noted that household crowding may have also contributed to differing infection rates. Some predominately Latino neighborhoods which were particularly hard hit in the first wave had high rates of household crowding.

More than 32,000 people in New York City have died from Covid-19 in total, according to a New York Times database.

All but eight of the detainees at Guantánamo Bay have received their first dose of the Covid-19 vaccine, the U.S. Southern Command said on Tuesday.

Biden administration officials disclosed that the Department of Defense had decided to expand the availability of the vaccine to all 40 detainees starting on Monday, the day all people 16 years and older became eligible for the vaccine in the United States.

The Southern Command, which has oversight of the detention center, first sought permission from the Trump administration to vaccinate the detainees in a Dec. 23 memo that described the prison population at Guantánamo as “a high-risk community,” and invoked both “the Geneva Convention and Department of Defense guidance.”

The vaccines are not mandatory for the military or civilian Defense Department employees and were offered to the detainees on a voluntary basis. Many of them are approaching their second decade in U.S. detention and have chronic illnesses. The oldest is 73 and has a heart condition, diabetes and other geriatric illnesses.

The Biden administration froze initial plans to offer them the vaccine on Feb. 1 because elected officials and families of the victims of the Sept. 11 attacks accused the Defense Department of putting terrorism suspects ahead of the American people, who were only just beginning to get access to the vaccines in substantial numbers at that point.

Vaccination rates have risen substantially since then across the country, which was nearing President Biden’s goal of administering 200 million doses by his 100th day in office.

Defense officials also decided to go forward with vaccinating the detainees this week in part because of what appears to be a significant rate of refusal to take the vaccines by adults at the base of about 5,500 residents, including at the detention center, which has a staff of 1,500 guards and civilians. As of April 1, according to health officials at the base, 47 percent of those eligible had not yet taken a single dose.

Now that the United States has met President Biden’s goal of having Covid-19 vaccines available to all adults, health officials around the country are hitting what appears to be a soft ceiling: More than half the nation’s adults have received at least one dose, but it will take hard work to convince the rest.

The risk is that it will take so long that the nation will not be able to reach herd immunity in time to stop worrisome new variants from evading the vaccines.

Polls show that vaccine hesitancy is on the decline as more people see their friends and relatives get vaccinated without incident. But John Bridgeland, the chief executive of the Covid Collaborative, a bipartisan group of political and scientific leaders working on vaccine education, said “the last miles here are going to be the toughest.”

Michael Carney, the senior vice president for emerging issues at the U.S. Chamber of Commerce Foundation, said, “If you think of this as a war, we’re about to enter the hand-to-hand combat phase.”