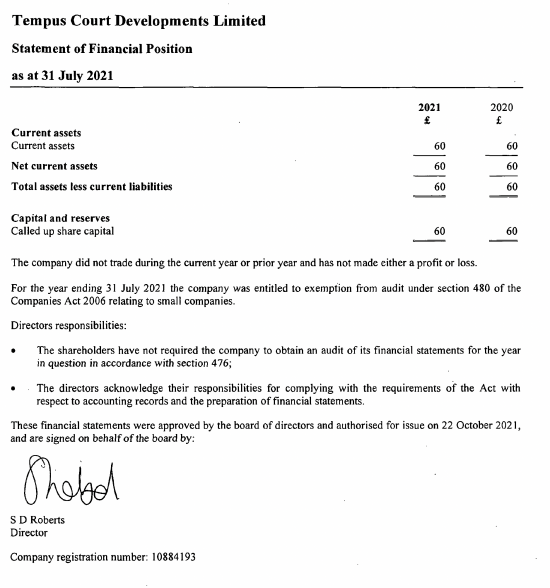 I have already this morning noted the resignation of government minister Lord Agnew in frustration at his own failure to get government departments to take fraud and error seriously.

One case of a company receiving funds from the government where accounts made the claim look unusual is that of Tempus Court Developments and its related entities. As Bloomberg  noted on 24 November 2021:

Among the borrowers disclosed in EU records, Bloomberg found about 60 dormant companies — firms that had reported no activity for accounting purposes when they borrowed the funds — including a business controlled by [John] Beckwith, 74.

Tempus Court Developments Ltd. — which Beckwith controls through the holdings of two other businesses — borrowed about 3.7 million pounds in November 2020, the EU records show. Yet the firm did not trade in the year through July 31 and lists assets of 60 pounds, filings at Companies House, Britain’s business register, show. It has filed accounts as a dormant business since 2018.

Beckwith, a Conservative Party donor, referred requests for comment to his son Piers Beckwith, who by e-mail said the loan was used to refinance borrowings secured against properties that are owned by the parent of Tempus Court, Mortar Tempus Court LLP, which isn’t dormant. Piers Beckwith also said the company has about 900,000 pounds outstanding on the taxpayer-backed loan it took from Triple Point LLP.

What is interesting is that the accounts for this company as originally filed at Companies House for 2021, filed in October 2021, shows it to be a dormant company:

There had been no trade in the year.

Then earlier this month it filed replacement accounts, following the Bloomberg report. The picture is somewhat different. The company traded in 2020 and 2021, after all: 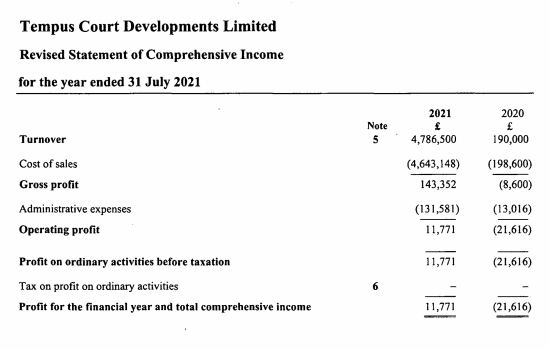 And it had a substantial balance sheet: 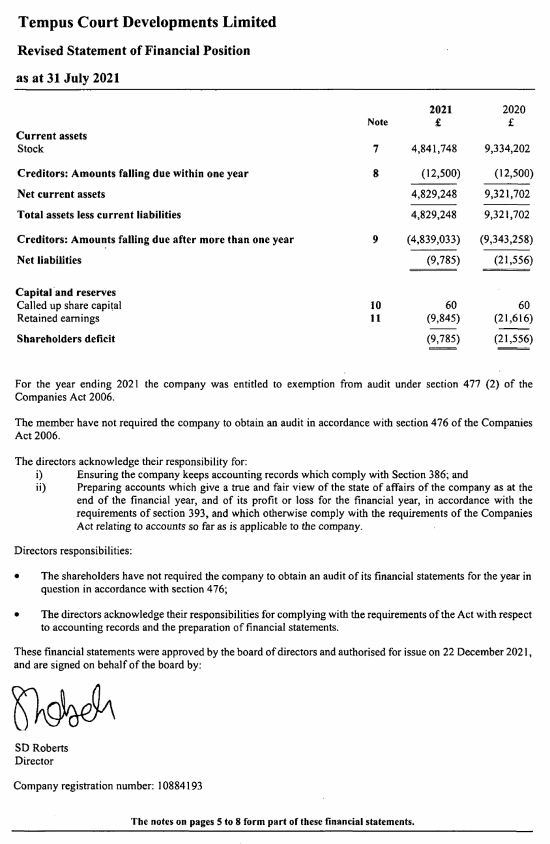 Clearly some errors were made here. I am not speculating as to why. I am making no assertions. I can express surprise, but that is all.

Much more worrying to me is the response to questions asked by my friend Prem Sikka in the House of Lords on this issue. This was the response he got when asking about what had happened in this case: 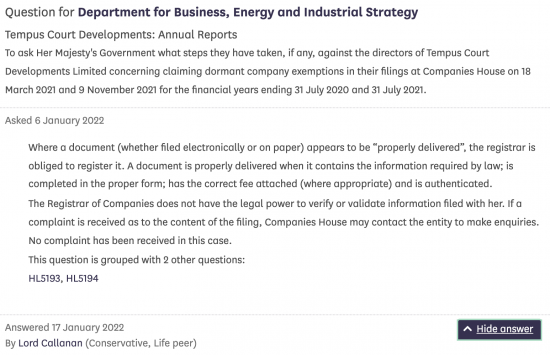 Prem wanted to quite reasonably know what steps were being taken when accounts that did not appear to show a true and fair view had been filed and had now been replaced by others after news reports have been issues that showed a very different perspective. He has been fobbed off with the response that unless the public complain the Registrar of Companies – which is a division of Department for Business, Energy and Industrial Strategy  – will take no action.

As Lord Agnew said yesterday, this is turning a blind eye. There is the law to uphold. Filing accounts that say a company is dormant when it is not is wrong. I am not sure how anyone could dispute that. So, Prem’s question was fair. What action is being taken in that case? The answer appears to be nothing at all.

I am not suggesting fraud in this case. Clearly, matters have been put right. There was only a mistake. But it was still a serious mistake and it should have been investigated and there are sanctions available in that case. The real question is why doesn’t Department for Business, Energy and Industrial Strategy care and what is going to be done about that? Passing the buck to the public is not appropriate. If the government is to protect us then it has to regulate. Very clearly it is choosing not to do so, and that is straightforwardly wrong, as Lord Agnew noted.

This has to change.