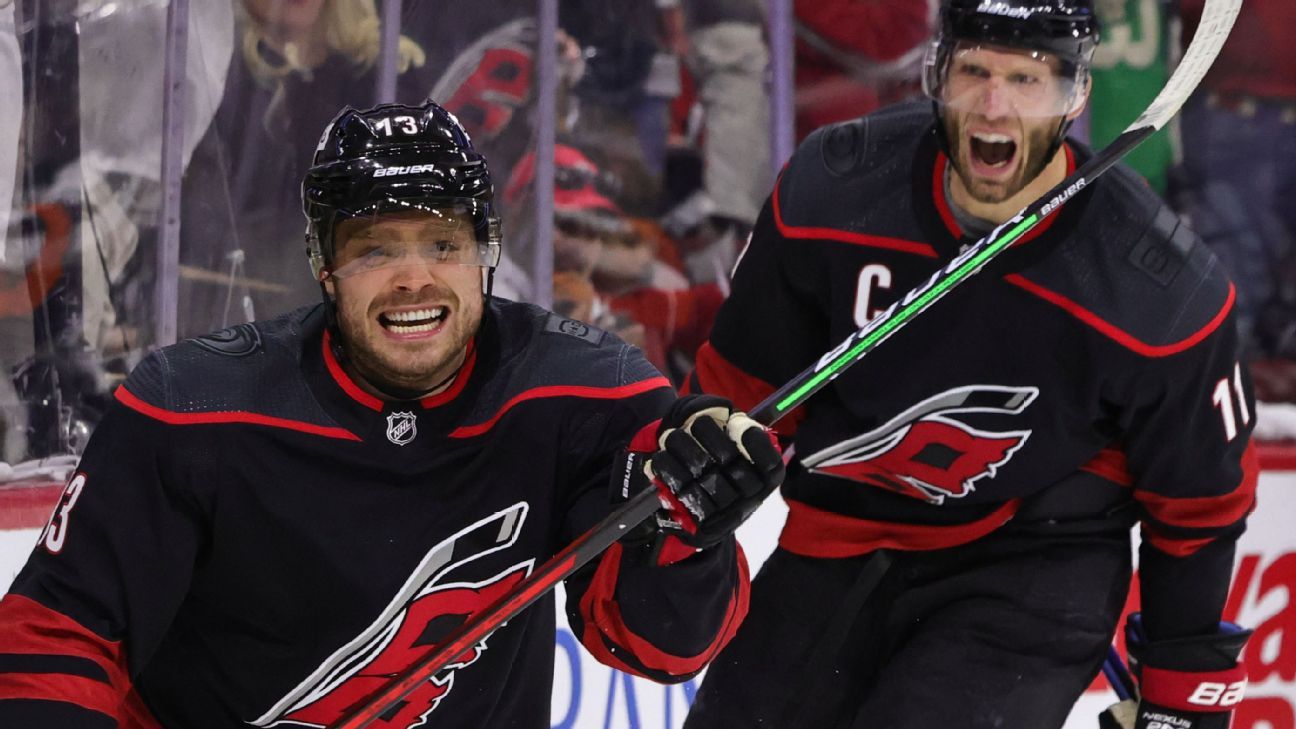 The Carolina Hurricanes are headed to the second round of the Stanley Cup Playoffs after defeating the visiting Boston Bruins 3-2 in Game 7 of their first-round series on Saturday.

Max Domi, an in-season acquisition, scored twice and tallied three points to lead the Hurricanes. Jake DeBrusk and David Pastrnak had the goals for Boston.

Carolina’s next opponent will be the winner of Sunday’s Game 7 between the Pittsburgh Penguins and the New York Rangers.

Home ice wound up being a major factor in the series. For just the ninth time in NHL playoff history, the host team won each game. Boston hadn’t lost in the first round since 2016-17, reaching at least the semifinals in three of the past four seasons and making a Stanley Cup Final appearance in 2018-19.

Carolina and Boston had also faced each other in two of the past three postseasons prior to this one, and it was the Bruins doing the eliminating both times (during the Eastern Conference Final in 2018-19 and in the second round of the NHL’s COVID-19 tournament of 2020-21). The Hurricanes’ third try proved to be the charm, where they could finally send Boston to an early offseason instead.

It was hardly an easy road, though. Carolina played the entire series without starting goaltender Frederik Andersen (lower-body injury) and in Game 2, Boston forward David Pastrnak ran into Andersen’s backup Antti Raanta and sent him out with an upper-body ailment. Rookie Pyotr Kochetkov stepped in to make his NHL playoff debut and backstop the Hurricanes to victory.

For Game 3, Boston made a crucial goaltending change from Linus Ullmark (.860 SV%, 4.16 GAA in Game 1 and Game 2) to rookie Jeremy Swayman and won the next two games by a combined score of 9-4.

The Hurricanes stormed back for an emphatic Game 5 win (when Boston was without top defenseman Charlie McAvoy due to a COVID-19 diagnosis), only to be snuffed out by the Bruins’ attack in Game 6 (for which McAvoy returned).

Neither Swayman nor Raanta had ever appeared in a Game 7 before. And both netminders would be tested from the outset of a brisk first period.

The Hurricanes and Bruins traded chances there until Teuvo Teravainen finally buried a puck backdoor on Swayman in the last 90 seconds.

Trailing 1-0, Boston couldn’t get out of the frame before Taylor Hall was assessed a double-minor penalty for high-sticking. The Bruins penalty kill came through – and Swayman made several big stops – to get Hall out of the box, only to have Domi slither behind the Bruins’ coverage and extend Carolina’s lead to 2-0.

That was the first playoff goal of Domi’s career, and it wouldn’t be his last.

After DeBrusk let a puck fly past Raanta to cut the Bruins’ deficit by one, Domi came calling again to make it a 3-1 game midway through the second.

Boston was 1-13-0 this season when down by multiple goals through two periods. That record would not improve, even as Pastrnak added another goal with 20 seconds left in regulation.

It was too little, too late by then for the Bruins to extend their season.