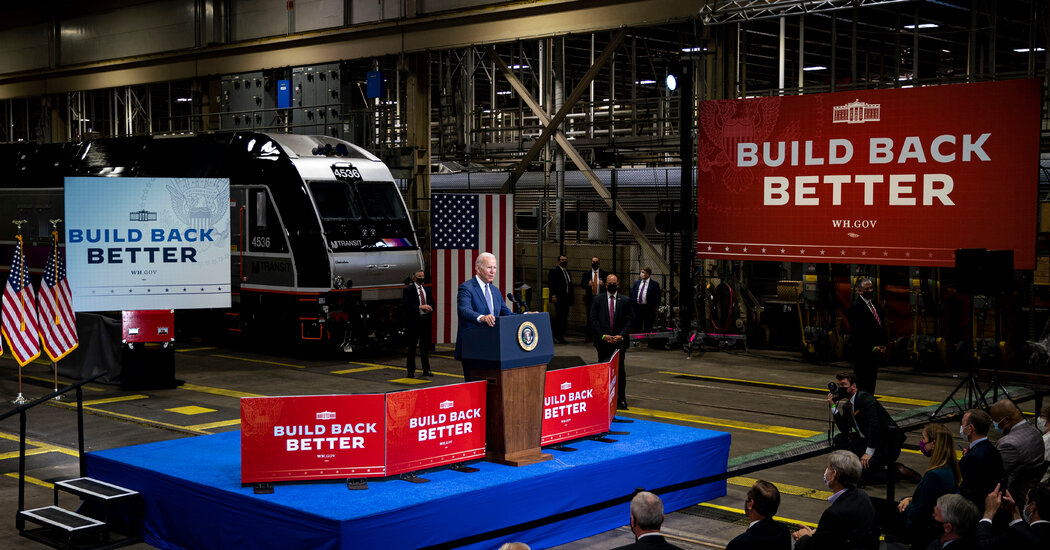 (Want to get this newsletter in your inbox? Here’s the sign-up.)

Good evening. Here’s the latest at the end of Wednesday.

Working against a self-imposed deadline of Thursday, when President Biden heads to Europe, some lawmakers signaled they may not be able to agree on a framework by the end of the day. Broad agreement has been reached on extending the child tax credit, granting universal access to prekindergarten and expanding financial assistance for child care, home health care, worker training and housing.

2. A Chinese test of a hypersonic missile was “very close” to a “Sputnik moment” for the U.S., the top American general said.

His remarks confirmed how the weapon took American officials by surprise. The test was a “very significant technological event,” Gen. Mark Milley, the chairman of the Joint Chiefs of Staff, said.

Two tests took place this summer, conducted in a fashion that would be highly visible to satellites, but the U.S. said nothing about it. Hypersonic missiles can quickly maneuver and alter course, making them virtually impossible for existing U.S. defenses to intercept.

In other foreign policy news, Iran’s chief negotiator said the country would return to nuclear talks in November.

3. Merck granted a royalty-free license for its promising Covid-19 pill to a U.N.-backed nonprofit.

The deal with the Medicines Patent Pool would allow companies in 105 countries, mostly in Africa and Asia, to sublicense the formulation for the antiviral pill. It can be manufactured and sold cheaply in poorer nations where vaccines have not been readily available. More than 50 companies have already approached the organization about obtaining a sublicense.

4. The assistant director who handed Alec Baldwin a live revolver told an investigator that he had not carefully checked the gun.

Moments later, Baldwin fatally shot the film’s cinematographer and wounded the director with the gun, a .45 Long Colt revolver. Dave Halls, the assistant director on the film “Rust,” said the film’s armorer had opened the gun for him to check the rounds and that “he should have checked all of them, but didn’t, and couldn’t recall if she spun the drum,” according to an affidavit.

Sheriff Adan Mendoza of Santa Fe County said that the lead projectile Baldwin fired on the set was recovered from the director’s shoulder. Investigators also recovered about 500 rounds of ammunition from the set — blanks, dummy rounds and what the sheriff’s department suspects to be live ammunition.

5. A revolt is brewing inside the world’s most influential consulting firm over its work with the planet’s biggest polluters.

As world leaders prepare to meet in Glasgow next week to address global warming, more than 1,100 McKinsey employees have signed an open letter to the firm’s top partners, urging them to disclose how much carbon their clients emit.

Of the 100 biggest corporate polluters over the past half-century, McKinsey has advised at least 43 in recent years, including BP, Exxon Mobil, Gazprom and Saudi Aramco. In 2018, those clients alone were responsible for more than a third of global carbon emissions, by one estimate.

Tomorrow, the heads of Exxon Mobil, Shell, Chevron and BP will testify in the first congressional hearing into industry efforts to hinder action on climate change. In an Opinion video essay, the climate activist Greta Thunberg says she has given up on politicians.

For the past four years, the University of California, Hastings College of the Law has been investigating the role of its founder, Serranus Hastings, in a set of massacres of the Yuki people.

Both the law school and its critics agree that Hastings “bears significant responsibility” for the killings. But they disagree on what to do about it, including whether the school should retain its name over worries of a decline in applications or a loss of donors. Native leaders in California say a broad re-examination over the treatment of American Indians is overdue.

8. Are we ready for a pandemic novel? Gary Shteyngart, the author of “Our Country Friends,” thinks so.

Last year, he was 240 pages into a dystopian comedy when the first wave of the coronavirus hit and he dropped it to start a new novel, about a group of old friends who decamp for the country to escape Covid. Now “Our Country Friends” is being lauded as “the great American pandemic novel.” Our reviewer agrees and says it’s Shteyngart’s finest novel yet.

“The constant state where terrible things are happening to every single member of society, where you can’t escape, that’s going to be the new normal,” Shteyngart said. “So we have to change the way we write.”

For decades, scientists have floated the theory of “mistaken identity” as a potential explanation behind the rare phenomenon of unprovoked shark bites on humans. A new study puts this theory to the test for the first time: Juvenile white sharks, which are the most frequent biters, most likely cannot tell the difference between a plump sea lion or a surfer, researchers found.

Researchers filmed from the bottom of aquariums at the Taronga Zoo in Sydney and recorded videos of sea lions, a seal, swimming people and people paddling. After running the videos through a computer program and statistical analysis, they could see — poorly — through a young white shark’s less-than-stellar eyes.

10. And finally, take a tour of a Russian czar’s palace.

For more than a decade, a team of architects and researchers has worked to restore the last home of Nicholas II, the last czar of Russia, to its early-20th-century glory. It was originally built in 1796 by Catherine the Great for her grandson Alexander. Nicholas II — his great-grand-nephew — moved the imperial family to Alexander Palace in St. Petersburg in 1905 to escape the capital on the eve of revolution.

Researchers recreated the interiors by working with a few fuzzy colored pictures, thousands of black-and-white photos, some watercolors, several drapery swatches and memoirs of palace life. In some cases, whole patterns of rugs were recreated from a small corner that managed to sneak into a picture or two. Take a look.

Have a decadent night.

Your Evening Briefing is posted at 6 p.m. Eastern.

Want to catch up on past briefings? You can browse them here.

What did you like? What do you want to see here? Let us know at briefing@nytimes.com.

Here are today’s Mini Crossword and Spelling Bee. If you’re in the mood to play more, find all our games here.