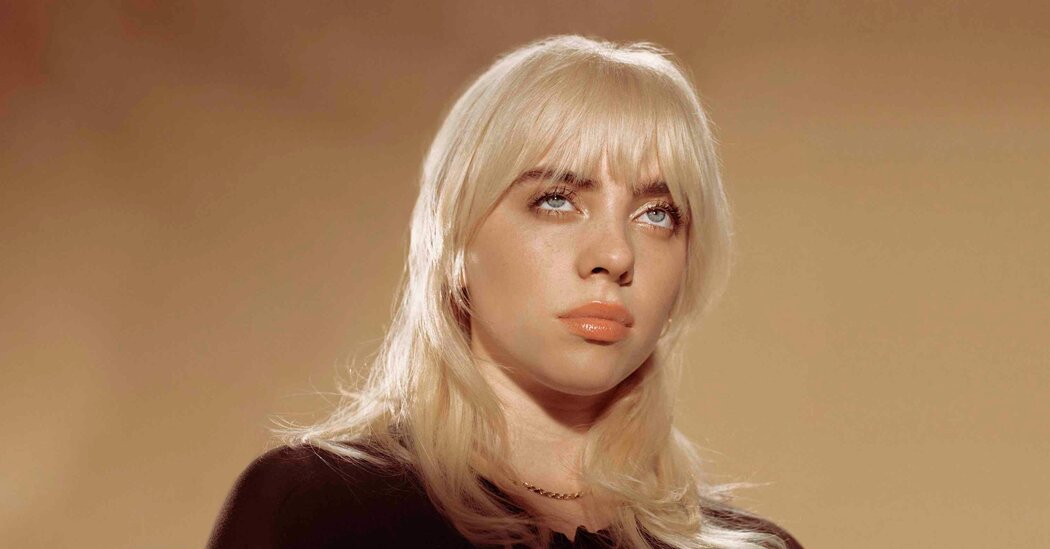 Cozy, pristine, Laurel Canyon-style acoustic guitars accompany Billie Eilish as she whisper-sings “Try not to abuse your power.” Then she proceeds to sketch a creepy, controlling, exploitative and possibly illegal relationship. The quietly damning accusations pile up: “You said she thought she was your age/How dare you?” Meanwhile, in the video that she directed, an anaconda slowly tightens around her. JON PARELES

The return of Willow — daughter of Will and Jada — is brisk, breezy pop-punk throbbing with a very particular sort of famous-child agonizing. She lashes out at deceptive former friends (and maybe some current ones, too) who “smile in my face then put your cig out on my back.” JON CARAMANICA

Whatever slams, girl in red — the Norwegian songwriter Marie Ulven — can use it. In “Serotonin,” from her new album “If I Could Make It Go Quiet,” she sings about trying to stabilize her wildly whipsawing, self-destructive emotions with therapy and medications: “Can’t hide from the corners of my mind/I’m terrified of what’s inside,” she announces. The music veers from punk-pop guitars to EDM crescendos and bass drops, from distorted rapping to ringing choruses, only to crumble as it ends. PARELES

It is perhaps the strongest testament to the A&R savvy of DJ Khaled that on an album filled with glossy cameos from Megan Thee Stallion and Lil Baby, and contemplative elder moments from Nas and Jay-Z, he opts to include the endlessly charismatic and exceedingly famous Cardi B on “Big Paper,” a song that sounds like she’s rapping on an old D.I.T.C. beat. It’s relentless, sharp-tongued and slick: “House with the palm trees for all the times I was shaded.” CARAMANICA

The power of “If You Care” isn’t in the conventional come-on of lyrics like “If you care you’ll come a little closer.” It’s in the persistent rhythmic displacement, top to bottom: the way beat, bass line, vocals and rhythm guitar each suggest a different downbeat, enforcing disorientation from the bottom up. They only align when the vocals turn to rapping at the end; it had to finish somewhere. PARELES

If you didn’t know better, you’d think the young country singer Priscilla Block was perennially gloomy, the sum of one bad decision after the next. That’s the mood on her impressive debut EP, which is sturdy, shamelessly pop-minded and full of songs about regret like “Sad Girls Do Sad Things”:

Don’t get me wrong, I love a beer on a Friday
But lately I’ve been at the bar more than my place
Another round of shutting it down
Two-for-ones ’til too far gone

Block has a crisp and expressive voice, and she telegraphs anguish well. But this EP skips over the rowdy cheer and randy winks of her breakthrough single, “Thick Thighs.” Which is to say, there’s more to Block’s story than heartbreak. CARAMANICA

Brye, ‘I’d Rather Be Alone’

The teenage pop songwriter and producer Brye Sebring lilts through the wreckage of an overlong relationship in “I’d Rather Be Alone.” Everything is crisp: her diction, her rhymes and the pinging syncopations of an arrangement that builds from single keyboard tones through percussion and handclaps to teasing back-and-forth harmonies. “I doubt you’ll even bother listening to this song,” she notes, one more good reason to break free. PARELES

The drama never stops building in “Swimmer,” from the coming album “Mythopoetics” by Half Waif: the electronics-driven songwriter Nandi Rose Plunkett. It’s a song about everlasting love — “they can’t take this away from me,” she vows — that evolves from an anxious rhythmic pulse to a chordal anthem, all larger than life. PARELES

The eminent bassist Christian McBride has just released “The Q Sessions,” a three-song collection that he recorded in high-definition for Qobuz, an audiophile streaming platform. The EP features three top-flight improvising musicians who, like McBride, tend to play their instruments in hi-def already: the saxophonist Marcus Strickland, the guitarist Mike Stern and the drummer Eric Harland. The group chases McBride’s syncopated bass line through the ever-shifting funk of “Brouhaha,” which he clearly wrote with Stern — and his roots on the frisky 1980s fusion scene — in mind. GIOVANNI RUSSONELLO

Jen Shyu and Jade Tongue, ‘Living’s a Gift — Part 2: Everything for Granted’

The singer, composer and multi-instrumentalist Jen Shyu draws on jazz, Asian music and much more. Her new album, “Zero Grasses: Ritual for the Losses,” reflects on loss, memory and perseverance. It opens with “Living’s a Gift,” a suite of songs using lyrics written by middle schoolers during the pandemic: “We’ve lost our minds, lost our time to shine.” The music is ingenious and resilient; leading her jazzy quintet, Jade Tongue, Shyu multitracks her voice into a frisky, intricately contrapuntal choir, folding together angular phrases as neatly as origami. PARELES

The elusive English electronic producer Burial has re-emerged yet again, splitting a four-track EP, “Shock Power of Love,” with the producer Blackdown. “Space Cadet” hints at post-pandemic optimism — a brisk club beat, arpeggiators pumping out major chords, voices urging “take me higher” — but Burial shrouds it all in static and echoey murk, letting the beat collapse repeatedly, until the track falls back into emptiness. PARELES

As she prepared to make her forthcoming album, “Umbral,” Sofía Rei embarked upon a trek through Chile’s mountainous Elqui Province. She brought a charango and two backpacks full of recording gear; on the trip, she recorded herself playing and singing, as well as the babbling sounds of the natural world around her. The album begins with “La Otra,” out Friday as a single, on which Rei sets a poem by the Nobel Prize-winning Chilean poet Gabriela Mistral to music. Flutes flutter over ricocheting synth bass, a stop-and-start beat and strummed charango, as Rei’s overdubbed voice harmonizes with itself in fierce exclamations, lapping at the sky like a flame. RUSSONELLO

Opinion | If You Ignore Pornography, You Aren’t Teaching Sex Ed