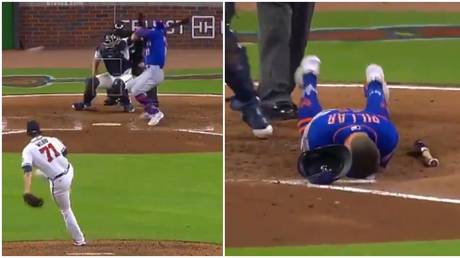 New York Mets star Kevin Pillar has reassured concerned fans that he is “doing fine” after collapsing in a bloodied heap when he took a 94mph fastball to the face against the Atlanta Braves on Monday night.

In the batter’s box in the seventh inning at Truist Park, Pillar was caught flush in the face by a pitch from Jacob Webb which caused him to slump to the ground, immediately clutching his face.

Kevin Pillar was just drilled in the face by a pitch and immediately left the game in Atlanta.Hoping for the best 🙏 pic.twitter.com/T67yrlkWoU

The concern among fellow players was evident as blood spurted from Pillar’s nose. Pitcher Webb was seen turning away in horror, unable to watch as he crouched on the mound.

Pillar eventually managed to get to his feet and walk off the field unaided as the blood took several minutes to be cleared up before the game could resume.

Kevin Pillar was just hit in the face by Jacob Webb with a fastball. The look here by Webb says it all. #Mets Pillar was gushing blood but able to walk off the field shortly after. This was awful!!! Everyone hoping Pillar is going to be okay. pic.twitter.com/LolprCf3jP

It was later confirmed that the Mets star, 32, had been taken to hospital for a CT, although he posted a message to fans assuring them that he was doing well.

“Thanks to everyone that has reached out!” Pillar tweeted after the game. “Scary moment, but I’m doing fine.”

Thanks to everyone that has reached out! Scary moment but I’m doing fine! #RBI#gamewinner 👍🏽👍🏽

Silence fell across the ballpark after the frightening incident, with fellow players admitting their fears.

“Devastating,” said Mets catcher Tomas Nido. “I was sick to my stomach.”

“The thought of standing in the box, the normal person doesn’t realize how fast that ball is coming in there and how quick you have to react.

“It was just one of those things, that ball looked like it was chasing him.”

Fans, fellow players and pundits online also expressed their horror at the scenes and wished the Mets man a swift recovery.

Others praised Pillar’s toughness for recovering and walking off the field unaided.

Won’t be posting that vid, but Kevin Pillar just took 94 to the face and was gushing blood from his nose immediately. Walked off without any help. Hope he’s okay. That’s one tough dude to walk off on his own power like that. Very scary scene.

The Mets earned a 3-1 victory to snap a three-game losing streak, although thoughts were very much centered on Pillar and his recovery.