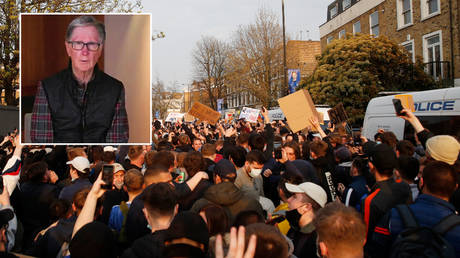 Football fans reeling from the wreckage of the European Super League have been baffled by a barrage of apologies from club owners – including claims that they had been “listened to” just days after the secret plans were unveiled.

Liverpool’s American owner, John Henry, sat solemnly for a video released by the former Champions League winners, telling his aghast audience that the multi-billion dollar league was “never going to stand without the support of the fans” before also apologizing to manager Jurgen Klopp and his players, some of whom had expressed their disapproval of the plans since they were unleashed on Sunday night.

Despite neither the club’s millions of fans around the world nor the squad who would have been expected to play in the league being consulted, Henry said the scrapping of the proposals within 48 hours of their inception showed the “power” supporters have, adding that the scandal “hurts”.

Arsenal, who had been seen as a symbol of the misguided elitism of a league that had been founded by some members whose league position gave them no right to be considered one of the top 12 clubs in Europe, said they had signed up because they wanted to “protect” their future.

John Henry: “We heard you, I heard you. I want to apologise to Jurgen, to Billy, to the players and to everyone who works so hard within LFC.” #awlfc [lfc] pic.twitter.com/vnz6JUmTWa

Thankyou for the apology, but it’s time to leave our club.

“It was never our intention to cause such distress,” they said, inviting an avalanche of responses asking why they had not reflected on that risk during the deliberations over the league that they were extensively involved in.

“The decision to be part of the Super League was driven by our desire… to support the game you love through greater solidarity and financial stability.”

Bolstered by vast backing from investment banking giants JP Morgan, the European Super League (ESL) had promised vast windfalls to the clubs involved while reducing the chances of less traditional European heavyweights from competing against them on the continental stage.

“We should like to thank all those supporters who presented their considered opinions,” said Spurs chairman Daniel Levy, whose club is almost certainly not going to qualify for European competition through the Premier League this season and were knocked out of the Europa League with an embarrassing defeat at Dinamo Zagreb.

“We felt it was important that our club participated in the development of a possible new structure that sought to better ensure financial fair play and financial sustainability whilst delivering significantly increased support for the wider football pyramid.”

Many fans were astonished that businessmen lauded for their acumen and astuteness were expressing surprise at the almost entirely furious reaction to the proposals, including protests outside stadiums and vows by some to abandon their clubs.

I’ve never seen such a unanimous disapproval of an idea in my life. Literally nobody on earth besides the owners likes it

They’ve also, rightly, folded on the idea as soon as they got a feel for the public mood. But how did they not know it was going to get that reaction? Bewildering.

“Just got to wonder how the ‘founding’ ESL clubs didn’t realise the s***storm that was going to be heading their way,” said one, calling out the “super-rich” for being “completely out of touch with reality”.

“They’ve also, rightly, folded on the idea as soon as they got a feel for the public mood. But how did they not know it was going to get that reaction? Bewildering.”

Sad to hear about this super league business but hope we can put it behind us and all come together to enjoy the entirely unproblematic World Cup in Qatar.

Another replied: “I’ve never seen such a unanimous disapproval of an idea in my life. Literally nobody on earth besides the owners likes it.

“The only assumption I can make is that collectively every single owner of each of those clubs has no idea about fans, the sport, the league structure and how vital grass roots is to their own clubs.”

Also on rt.com
‘I hope others follow their lead’: UK PM Johnson commends Chelsea and Man City as clubs set to pull out of Super League


All six English clubs involved in the scheme announced their intention to withdraw from it on Tuesday, shortly after wild scenes from the Stamford Bridge home of Chelsea, where angry fans took to the streets and blocked the team bus from entering the stadium ahead of their Premier League draw with Brighton.

The remainder of the clubs involved, including the likes of Spanish giants Barcelona, Real Madrid and Atletico, are expected to follow suit following the collapse of the ill-fated initiative.