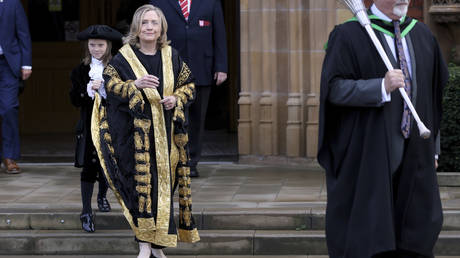 After a not-so-hearty reception of the crowd outside Queen’s University in Belfast, that honored her with the title of its first-ever female chancellor, the ex-presidential candidate Hillary Clinton flaunted caped pics on Twitter.

Clinton became the chancellor of Queen’s University on Friday to the cries of “war criminal” from a small crowd of hecklers outside, but reactions to her visit and social media mockery of the images of her wardrobe have done little to deter her from celebrating the newly-acquired title.

“Just call me Madam Chancellor,” Clinton tweeted on Saturday, attaching images of her in her large gown at Friday’s ceremony, while a child carries her cape behind her.

However, not even Clinton’s supporters have apparently wanted to refer to the former Secretary of State as “chancellor”: her most loyal fans responded by fantasizing about calling her “Madame President,” getting the term trending with some cringe tweets.

“Oh how I would’ve loved to have called you Madam President,” one user wrote in response to Clinton’s pictures.

America lost out, the World lost out, and Humanity lost out that Trump**, Putin, and the GQP stole the 2016 Election.Our world would have been *SO MUCH BETTER* had you been our very first “Madam President”. https://t.co/J5QINV6t4x

Meanwhile, others mocked the idea of Clinton receiving a ‘Madam Chancellor’ title as a consolation prize in place of ‘Madam President’.

Clinton received her five-year chancellor term in 2020, but the actual inauguration had been postponed due to the Covid-19 pandemic. The title is largely symbolic, but includes Clinton representing the school abroad and having speaking engagements at ceremonies. While the president and vice-chancellor of Queen’s University, Ian Greer, has welcomed “an internationally recognised public servant who has demonstrated a longstanding commitment to Northern Ireland” into her new role, protesters blasted the university over their “shameful” support of the hawkish Democrat.

Also on rt.com
‘War criminal! Out!’ Protesters greet Hillary Clinton as she becomes chancellor of university in Northern Ireland

Pretty wild to see people imply there’s going to be a “next time” for climate legislation. I mean, sure, you can technically pass a...

Thousands of dead sea creatures are washing up on English beaches

Ford to reinstate dividend in the fourth quarter