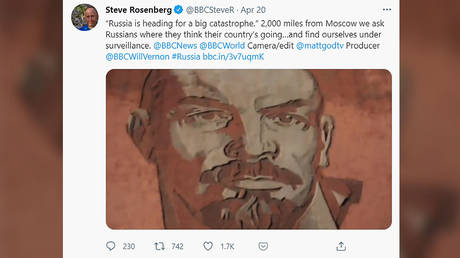 By Paul Robinson, a professor at the University of Ottawa. He writes about Russian and Soviet history, military history, and military ethics, and is the author of the Irrussianality blog

Russia’s distant provinces are little known, and any effort to tell us more is welcome. Unfortunately, a BBC report from Siberia fails to illuminate, opting for tired clichés and discredited prophecies of impending catastrophe.

“Russia is finished,” the Atlantic declared back in 2001.  Twenty years on, Russia is still here, but the predictions of doom continue unabated, as seen in the titles of books such as Richard Lourie’s ‘Putin: His Downfall and Russia’s Coming Crash’. “Russia is finished,” indeed! How many times have we heard that?

So many that back in August 2014, the former Moscow bureau chief of Business Week, Paul Starobin, felt obliged to pen an article entitled ‘The Eternal Collapse of Russia’, which mocked the “Russia is doomed syndrome” infecting his fellow correspondents. Like an eccentric prophet with a banner announcing ‘The End is Nigh’, when the inevitable collapse fails to materialize, Western journalists shrug it off and bring out the banner again. This time the end really is nigh – really! Except it never is.

Joining the ranks of the doomsayers this week was the BBC’s Russia correspondent, Steve Rosenberg with a report from the Siberian city of Krasnoyarsk. To make sure that nobody would miss his point, Rosenberg leapt straight in with the following opening words:

“It’s the eternal Russian question – where is Russia going? Russia is heading for a big catastrophe. I think that people are afraid. Wherever we go, we’re being watched. With Putin’s most vocal critic in jail, with a Russian troop-build up near Ukraine, in what direction is Russia heading?”

Also on rt.com
New York Times ‘bounties’ non-story shows US/UK media has got so used to blaming Russia, it’s basically now doing it out of habit

To be fair to Rosenberg, it’s not him who says, “Russia is heading for a big catastrophe.” Those are the words of Krasnoyarsk artist Vasily Slonov, whom Rosenberg interviews. It’s easy to see why Slonov was picked – with a long, ragged grey beard, he’s very much the image of an Old Testament prophet. Throw in his strange artistic renditions of Russian President Vladimir Putin (including a bust of Putin with lighting tubes sticking out of his head), add his predictions of impending disaster, and he’s the ideal interviewee – colorful and on message.

So too is interviewee number two, a woman named Kseniya Andreyeva, who complains of rising food prices (a fair enough point), and in perfect English (probably not typical of the average Krasnoyarsk resident) tells Rosenberg that people are afraid to protest, as they might lose their jobs if they do. People aren’t speaking out against the government, Rosenberg notes, “but that doesn’t mean people are content.”

Perhaps self-aware enough to know that he will be accused of anti-government bias, Rosenberg finishes off with a chat with the director of the Krasnoyarsk zoo, who tells him that “We don’t need any revolutionary changes.” For Rosenberg, this is an opportunity for another dig at the Russian state. “Communism promised Russians the bright future. Vladimir Putin’s Kremlin pledges only stability,” he says.

The zoo also provides a chance to include a bit of ‘klyukva’ – that’s to say, cliché-ridden, stereotypical images of Russian life. Typical of klyukva are matryoshka dolls, bears, Lenin, balalaikas, vodka, fur hats, and the like. Rosenberg gives us more than a few – images of Lenin at the beginning and end of the report, for instance, and then – pure klyukva – pictures of a bear at the Krasnoyarsk zoo being fed pancakes. Challenging popular conceptions of Russia isn’t top of the agenda.

Finally, to wrap everything up, Rosenberg returns to his artist friend Vasily, who repeats the phrase “Russia is heading for a big catastrophe,” adding that, “I’m certain, it’s inevitable. It’s like the Titanic heading for that iceberg. It can’t be [avoided], just like the sun rising is unavoidable.” Placing this prediction at both the start and finish of his piece, Rosenberg gives it extra force. He doesn’t say that he agrees, but if he doesn’t, why do it that way?

All this is typical journalistic methodology – talk to a few people, and then draw some sweeping conclusions. The problem is that the people interviewed aren’t always very representative. The independent polling company Levada reports that 48% of Russians think the country is heading in the right direction, as opposed to 42% who think the opposite. That’s not a huge win for the optimists, but it indicates that belief in inevitable catastrophe is far from the norm.

In any case, Rosenberg didn’t need to travel to Krasnoyarsk to hear the things he shows in his report. He could just as easily have done it if he’d stayed in Moscow. It’s 4,000 kilometers from Moscow to Krasnoyarsk. But all we get for the effort are three people, none of whom say anything startlingly new. It hardly seems worth it.

In fact, it’s a lost opportunity. There is very little reporting about life in Russia’s provinces. Rosenberg had the chance to tell us something about what’s it really like in Krasnoyarsk. Instead, at the end of his report, we know absolutely nothing about the place. It could be absolutely anywhere.

Also on rt.com
Russia to withdraw from International Space Station starting from 2025, deputy PM confirms, as Moscow works on replacement

The Lonely Planet guide to Krasnoyarsk tells readers that the city has numerous museums, including the old Lenin museum that has “reinvented itself as a beautifully eclectic art venue that fuses elements of the original communist-era exhibitions with top-quality contemporary art and photography. An installation dedicated to Afghan and Chechen wars, mixing naïve art with photographic and personal belongings, is especially poignant.” Now that sounds interesting. It might also reveal something unexpected about how Russians approach painful episodes in their recent past. But, alas, we hear not a word about it, nor about anything else in Krasnoyarsk for that matter.

Anyone who’s been to Moscow in recent years will have seen enormous improvements in the local infrastructure. But what’s it like elsewhere? What’s the state of the roads in Krasnoyarsk? How’s the local economy doing? Is it like my hometown in Canada where the malls are full of shuttered shops, driven out of business by the Covid pandemic? Or is everything open and doing business? All that would be useful stuff to know. Alas, Rosenberg fails to provide it.

There’s so much information that journalists in Russia could be telling us about conditions in the country. Instead, they seem to be fixated on selling a story of impending doom, even though the story has been proven wrong time and time again. Come on, BBC. Surely you can do better than this.

The statements, views and opinions expressed in this column are solely those of the author and do not necessarily represent those of RT.